The holiday season is once again upon us, which means college football programs from all across the country will be receiving bowl game invitations this December. 78 teams from 10 conferences in the Football Bowl Subdivision will participate in the 40 postseason contests, but how does each team get selected to each individual game? In today’s football landscape dominated by corporate contracts, conference tie-ins, and timeless traditions, the bowl selection process proves to be a complex issue.

Bowl games got their start in the early 20th century, as ways for warm weather cities to attract tourism from fans in northern states by inviting football programs from colder regions to play in exhibition games. The Rose Bowl, Orange Bowl, Sugar Bowl and Cotton Bowl began the practice, which has now evolved into the 40-game postseason slate we see today, where almost every team with at least 6-6 record gets the chance to extend their season.

Where is Miami going?

To get an idea of what bowl Miami will be invited to, one can look at the Atlantic Coast Conference’s bowl tie-in contracts. Each of the 37 non-playoff bowl games have contracts with two conferences, whom will send the bowl games the participating teams. These contracts are based mostly on geography and tradition, with more historically established and major market bowls getting more favorable selection opportunities than newer games in smaller markets. 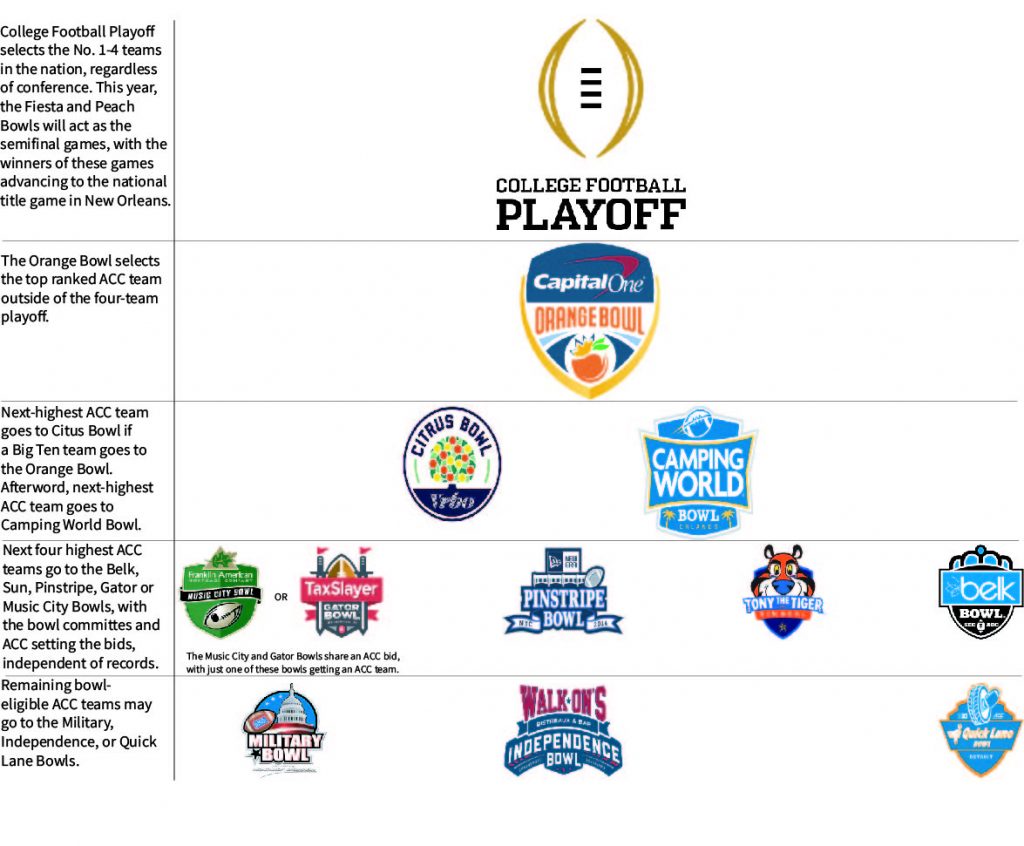 The ACC will send 10 of its teams (plus one, which we’ll get to later) to one of the 12 bowl games it has tie-in deals with, as well as possibly the College Football Playoff assuming Clemson qualifies.

Once the playoff selects its four participants from any conference Sunday, the rest of the bowl selection process begins to get underway.

First for the ACC will be the Capital One Orange Bowl in Miami for its highest ranked, non-playoff team to participate in, where it will represent the conference against the highest ranked Southeastern or Big Ten Conference team not selected for the playoff, Rose or Sugar Bowls.

The next-highest remaining ACC team will be selected for the VRBO Citrus Bowl to play an SEC team, while the team right behind will go to the Camping World Bowl against an opponent from the Big 12. However, if the ACC program’s opponent in the Orange Bowl comes from the SEC, the ACC’s bid to the Citrus Bowl is instead given to the Big Ten, and the best remaining ACC team after the Orange Bowl’s pick simply goes to the Camping World Bowl. Totally simple.

The next four-highest remaining ACC teams are collectively sent to four different games, known as “Tier One” bowls. Each of these games carries equal weight, with specific bowl assignments being decided collectively by school athletic departments, the bowl committees, and the ACC. The ACC’s tier one bowls are as follows.

ACC teams still without a bowl placement following the tier one bowls’ selections will be placed in “Tier Two” games. These bowls will select the remaining ACC teams in the order shown below.

In addition to the 10 ACC teams that are bowl eligible, Notre Dame will be entitled to an ACC-earmarked bowl bid as an affiliate conference member, so long as their bid doesn’t interfere with a full member’s opportunity to play in the Orange Bowl.

Because of Miami’s two consecutive losses to end the season, many analysts are predicting the 6-6 Hurricanes to end up in one of the ACC’s tier two bowls. However, it is important to remember that overall record isn’t the only factor that determines bowl selections–especially as the selection process progresses toward the middle and lower end game—with a team’s record, fanbase size, marketability, and physical proximity to a bowl site all playing factors in a bowl’s selection of a program.