How films defined the 2010s

From the resurgence of the horror genre, to the instant classic that was “Bridesmaids,” to the new trend of online film debuts on sites such as Netflix, the last decade has proven that the landscape of the film industry will never be the same. For me, this was the decade I really grew up and started discovering different forms of storytelling. During my time here at UM, I’ve taken film classes that have made me more appreciative of film as artistic expression and it’s helped me understand how impactful stories told through film can be.

The 2010s were huge for several book series turned movies. The final chapters of massive film franchises such as Harry Potter and Twilight saga came to an end in 2011 and 2012 with their respective two-part finales. These franchises changed the movie-watching experience for many book lovers. The Twilight Saga spawned a worldwide debate over who was Team Jacob and Team Edward, which really allowed fans to engage with the actors in ways we hadn’t seen before. Harry Potter led to the creation of an entire theme park and its own website Pottermore, where you can take a quiz and choose which house you belong to. This interactive experience has bred new generations of fans and given people more of a behind the scenes look at the Hogwarts world. Both franchises affected pop culture in a really profound way and allowed fans to see the worlds they adored on paper come to life.

Disney also reinvented itself during the past decade, proving its enormous global reach. Recreating classic animated films into live-action versions was a genius move on Disney’s part. This trend allows children who grew up with these originals to see these stories in a more realistic way. “The Lion King” live-action movie that came out earlier this year made $543.5 million worldwide and “Beauty and the Beast” made $504 million just two years ago. Their timelessness and obvious connection to older generations helped its grossing but the relatable characters of Simba and Belle definitely appealed to today’s kids. When I was a kid, both boys and girls alike loved these movies and could relate in some way. Disney also put out critically acclaimed and culturally inclusive animations during this decade such as “Moana” and “Coco,” showing a much-needed strive towards diversity. Disney maintains its relevance by being able to try to adapt to an evolving world. Its push for representing various cultures and identities allows it to touch more people’s lives and remain a central part of people’s childhood.

The 2010s also saw many compelling stories as well as more representation of different identities. “12 years a Slave” was released in 2013 and became a huge success, winning three Oscars including Best Picture and Best Adapted Screenplay. 2018’s “Crazy Rich Asians” broke ground for its inclusion of an all Asian cast and 2017 Best Picture winner “Moonlight” was applauded for representing the LGBTQ+ and African American community through authentic on-screen stories. Superhero films such as “Black Panther” and “Wonder Woman” gained critical acclaim with their inclusive casting and female directing.

One of my favorite cinematic developments of the last decade has been the resurgence of the horror genre. As a huge fan of movies like “Scream” and “Halloween,” I felt like there was a big gap in this market for years. Then “Insidious” came out in 2010, changing everyone’s perception of what modern horror films could accomplish. Films that came later such as “The Conjuring” and “Sinister” were so popular they both got sequels, and “Get Out” in 2017 and “A Quiet Place” in 2018 took the genre to a whole new level psychologically and creatively. I also think the move to remake or continue old classics such as “IT” and “Halloween” has been extremely successful and proves that when all else fails, the classics will never let you down.

This decade was really pivotal in terms of storytelling and representation, but there’s always room for improvement. As a writer, I think a good film is all about the story being told. I hope this next decade provides a whole new range of stories for us to enjoy, helping us explore uncharted territory.

Nicole Macias is a senior majoring in English. 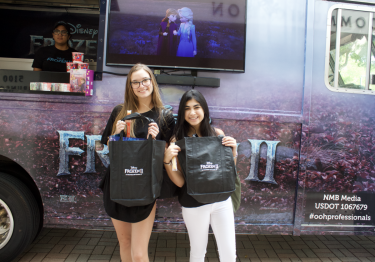