The Miami Hurricanes couldn’t overcome a poor shooting night or the Indiana Hoosiers Wednesday evening at the Watsco Center, dropping a 58-45 decision in the Big Ten/ACC Challenge.

The No. 21 ranked Hurricanes (5-3) recorded season lows in points, field goal percentage (21.7%) and assists, with just four in the loss to the No. 14 ranked Hoosiers. Miami also lost the turnover battle 18-13 and were outscored in the paint 22-14. IU allowed just five Miami steals, despite the face that Miami came into the evening averaging 9.71 steals per game, which ranks second-best in the ACC. 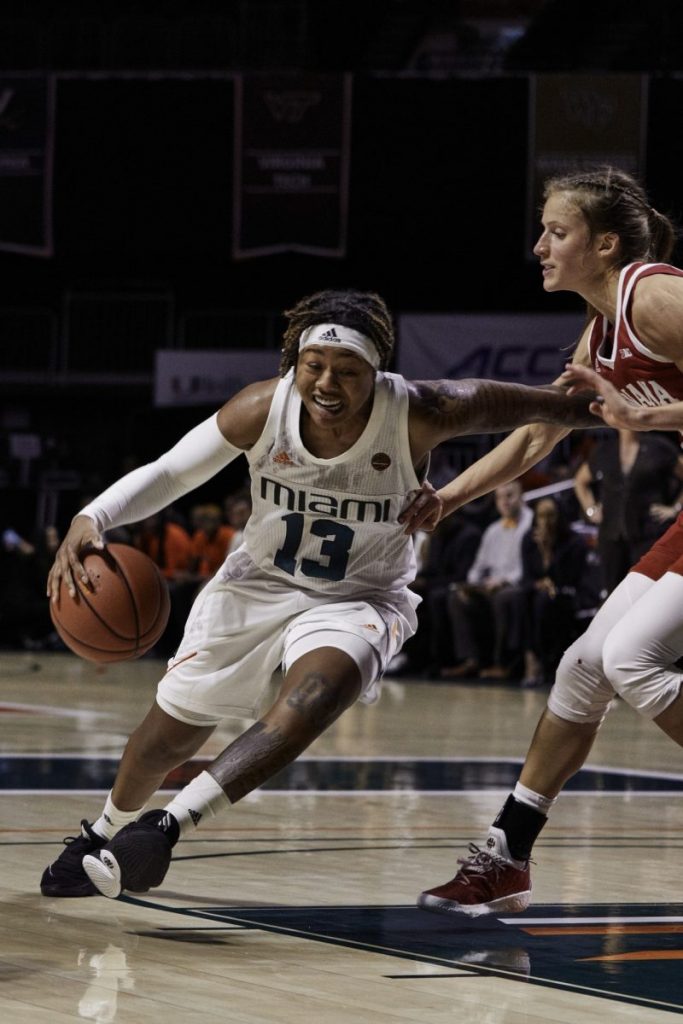 The Hoosiers entered Wednesday with four players averaging at least 10 point per game, including leading scorer Grace Berger, who did not play in the game. Junior guard Jaelynn Penn logged a game-high 17 points, Ali Patberg recorded 12 points and sophomore forward Aleksa Gulbe added 10 points along with a team-high eight rebounds.

On the other end of the floor, the visitors held Miami forward and ACC Preseason Player of the Year, Beatrice Mompremier, to just 11 points, well below the conference-high 18.1 points she came into the game averaging. Endia Banks’ 13 points was a team high for Miami, while Mykea Gray registered seven points and Taylor Mason added six. Jamir Huston’s eight rebounds led Miami and equaled a game-high.

The Hurricanes did hold Indiana to just a 37.5 shooting percentage and out-rebounded them 46-39, which included out-rebounding them 19-8 on the offensive glass. Miami also held Indiana to just 58 points, well below the 73 points per game allowed in the Hurricanes’ three prior games. However, those numbers were overshadowed by Miami’s shaky offensive outing and a 23-4 extended run by IU that bookended halftime.

Indiana jumped out in front 14-11 after one quarter, mostly because of the nine turnovers Miami committed in the opening period.

The Hurricanes went ahead 25-20 with less than four minutes remaining in the first half, but allowed Indiana to go on a 11-0 run as the Hoosiers surged back in front and took a 31-25 lead into the locker room. The Hurricanes shot just 30 percent from the field before halftime, and 26.7 percent in the second quarter. 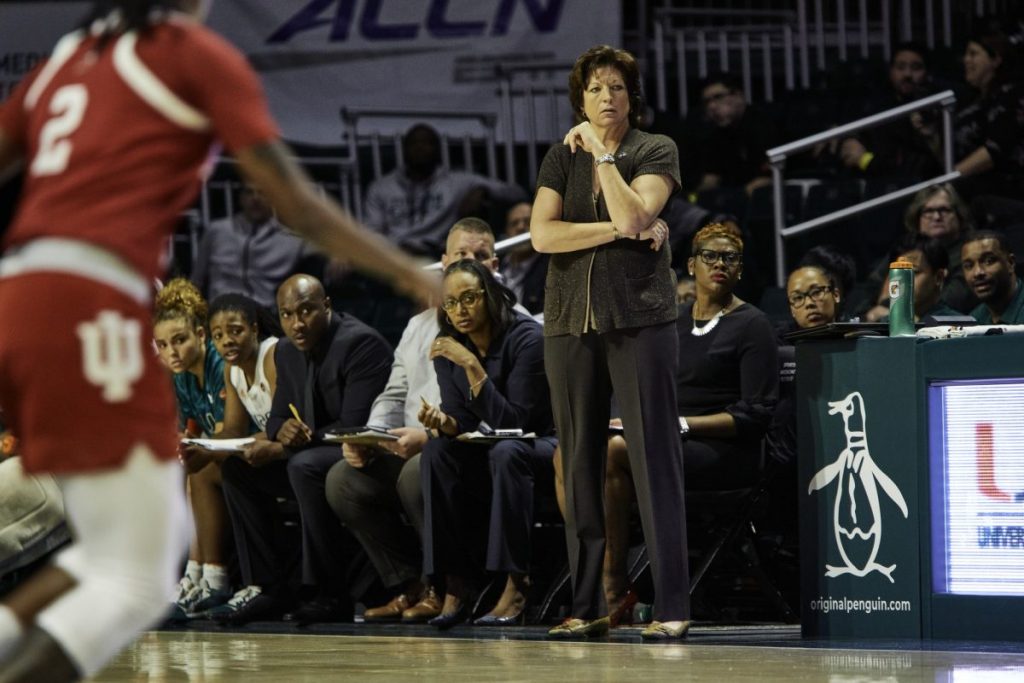 Head coach Katie Meier looks on as Miami has the ball. The Hurricanes had 18 turnovers and shot 22.7 percent from the field. Photo credit: Josh Halper

IU padded their lead with a 12-4 start to the third quarter to extend their lead to 14, their largest lead of the night. The Canes cut the deficit to as little as six points with just under four minutes to play, but saw any momentum slashed when Indiana’s Brenna Wise drained a three-pointer from the wing.

With the loss, Miami falls to 0-3 against ranked opponents this season. The Canes were defeated by No. 19 DePaul on Nov. 23 and No. 5 Oregon State on November 29. UM has now lost three of their last four games dating back to Nov. 23 after starting the season 4-0.

With the loss to Indiana, Miami has now been defeated in two consecutive Big Ten/ACC Challenge games. Miami lost 74-63 at Purdue a season ago in the challenge. Before the 2018-19 season, UM had won four straight games in the event.

The Hurricanes are off for 12 days before they return to the Watsco Center on Dec. 17 to face Binghamton.