There are few things more stressful during the holiday season than meeting your partner’s family for the first time. That stress only intensifies for interracial couples.

There is a good amount of reading available on the internet detailing how white people can support their partners of color at family gatherings (and rightfully so, since the concerns range from simply remembering names to dealing with micro-aggressions to wondering if your future in-laws are full-blown bigots). But what about the other way around? While being white is in no way a hindrance in life, being white in a room full of your black partner’s family members (who are more than likely side-eyeing you) for the first time can be, at the very least, uncomfortable. So, what is the best way to go about making your first impression, your best impression?

The first step is always an honest and open conversation with your guy, gal or non-binary pal. Ask about the things outside of your control. What is their family like? What are their expectations of a significant other, and do they have a history of giving said significant other the third degree? Do they know that you are…of the fairer-skinned kind? This applies to all relationships, not just interracial. Your partner should be your number one fan, your biggest supporter, meaning they should always be in the business of preparing you for whatever life may throw at you (within reason, of course).

Now, onto the things you can control. You have exactly five minutes after walking in to get over the initial discomfort of being the only white person in the room. Why, you may ask? This may be a first for you, but this phenomenon (being in a room where no one else looks like you) is guaranteed to be something your partner has experienced before. It is okay to feel nervous, scared and a bit shy, but leave it at that. Put your big girl/big guy panties on and power through because the weirder you make it, the weirder it will be for everyone. And take this as a minuscule introduction to the things your partner of color deals with every day.

Even before fully processing the initial shock, this next step is very important. While this is probably advice no one has ever had to give you, especially in the case of white men in particular (because they tend to do it naturally, unapologetically and a bit annoyingly), now is the time: walk in as if you have every right to be there. Exude confidence because black families can be brutal. Once they sense a hint of fear of discomfort, you will never hear the end of it. This is usually not done in a mean or aggressive way, but black families are the kings and queens of roasting. And if you do not have the skillset to give it back 10 times harder, save yourself the trouble.

Senior Mikayla Telasco said she compares it to the 2005 movie “Guess Who” starring Ashton Kutcher and Bernie Mac. If you have not seen it, she recommends doing so, but either way, Telasco said, “Don’t come off too soft. Be assertive because they will tease.” 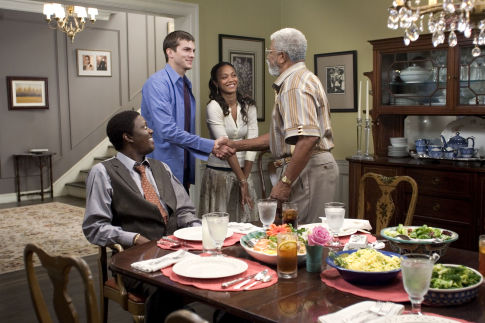 In the 2005 movie "Guess Who," Percy (played by the late Bernie Mac) is excited to meet his daughter Theresa's (played by Zoe Saldana) finance. That is, until he finds out Simon (played by Ashton Kutcher) is white. Percy's skepticism coupled with Simon's clueless behavior makes for a hilarious uphill battle to win over his future in-laws. Photo credit: Columbia Pictures Industries

This next tidbit is usually common courtesy for the first time meeting anyone, but just in case: steer clear of politics. Bringing things like religion and who you voted for in the last election up early on in the relationship is a sure-fire way to cause chaos and arguments in which no one ever wins. And in this case in particular, you already have all eyes on you. So, do not make it any harder. This includes adding in comments you think make you sound “woke” because there is nothing more cringe-worthy than a white person trying too hard to prove they are not a “regular” white person. Even worse, in your quest to sound more culturally aware than you actually are, you are bound to slip up and say something at least the slightest bit problematic. So, tread lightly and realize that, probably for the first time, your opinion is not going to be the default nor will it always be the one that is needed at the time.

Lastly– and this is said with complete and utter respect and kindness– do not bring food if you cannot cook. That means that someone other than you has confirmed that you are indeed the next Paula Dean (minus the n-word scandal and casual racism). This may seem like a low blow or a play on the ever so popular “white people don’t season their food” joke, but in this case, it is truly in your best interest. Food is integral to the black culture and experience. It is often an opportunity to show love and fellowship, and well, bringing in a casserole made of all the random food left in your pantry is bound to upset the natural order of things. You do not want to become a viral Twitter meme. See Niall Horan’s 2017 unseasoned turkey debacle to clear up any confusion.

If you absolutely know your food is good, go for it. That is the perfect way to get your foot in the door. Otherwise, there is no shame in picking up some flowers or a store bought dessert. It will save you the embarrassment and the family the pain of having to pretend it tastes good…or worse, hurting your feelings.

Lastly lastly, be yourself. Black people are just people, and you should never have to change who you are in order to be with the person you love.

Disclaimer: I am not a racial theorist nor a relationship expert (hence, why I am a long term member of the single women’s club)– just a black woman doing some holiday charity by helping white people not embarrass themselves. Furthermore, keep in mind that all families are not the same. There will never be any one-size-fits-all, sure-fire way to impress your partner’s family, no matter the color. All of that is to say– take this advice with a grain of salt.