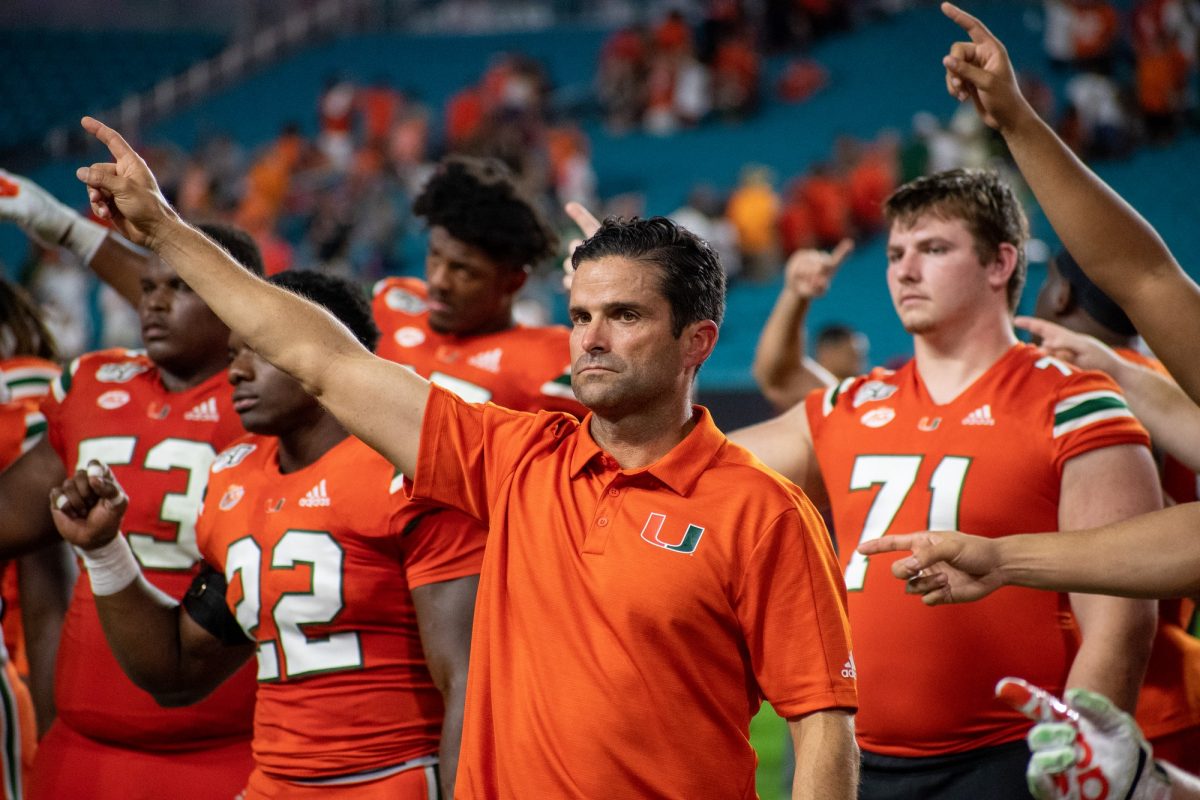 This was a historic football season for the Miami Hurricanes.

They suffered one of the worst losses in program history to FIU.

For the first time ever, they lost to Duke for the second consecutive season.

Miami did not make any progress this season. They regressed.

Manny Diaz finished his first regular season as head coach with a 6-6 record, the first since 2014, and the third six-loss season Miami has had in the past six years.

Losing to FIU and Duke in the same season should not be acceptable for a program that has won five national championships and was once sitting at the top of the college football kingdom.

Someone has to be held accountable for the countless mistakes the program has made this season and Manny Diaz should be at the top of the list.

One of Diaz’s biggest faults even before the season began was the hiring of offensive coordinator Dan Enos and defensive coordinator Blake Baker. Enos has done an insufficient job at calling an offense that has so much talent and potential. Baker inherited some of the most dominant defensive players in the country, and he coached the defense to a 30-point loss to FIU.

“That is not something that at this moment I am prepared to think about,” Diaz said about changes being made to his coaching staff after the Duke game. “We have to change the way that we are playing. Now there is a lot of things that go into how that happens. As you get through the year and you step back and you look at the entirety of the year, you evaluate your staff and you evaluate anything in your program.”

Talent is either something you have or you don’t, and quarterback Jarren Williams showed how talented he is when he threw six touchdowns against Louisville. So then why can’t Miami maintain consistent quarterback play for more than two games? Is it the offensive line, play-calling, poor practice or just an overall mentality problem throughout the whole program?

Diaz has reiterated throughout the season that the culture of the team needs to be changed.

“It is about building a culture of sustained excellence, and I can’t sit here today and act like we’re any closer to that than we were nine months ago,” Diaz said in a press conference two days after Miami’s loss to FIU. “But in terms of establishing and laying the groundwork and foundation of that, those things are going on right now, and we’ve seen that.”

After the loss to Duke Saturday night, Diaz emphasized that the effort is there from his players, but the lack of execution was the fatal flaw.

“I’m proud of the way that we competed and I’m proud of our effort. However, our issues are obvious,” Diaz said. “It is simply our ability to execute that gave us no chance to win this football game. When you look at 13 completions out of 35 pass attempts and you throw in nine sacks on top of that, our passing game—we had no chance.”

The inconsistency and lack of preparedness that the Miami football team exhibited all season is something that is so below the standard of the program. It’s embarrassing and has to be changed.