As we grace Art Basel coming up in Miami, it’s important that we reassess certain conversations surrounding art. The New York Times recently questioned if French post-impressionist artist Paul Gauguin should be “canceled.” Gauguin, who passed away in 1903 but whose work is still popular among curators, rose to fame in the late 19th and early 20th century after the paintings of his life in Tahiti exploded in the art world. His works depicted himself, his friends and family, living in various locations he traveled to, as well as the young Polynesian girls he had sex with, and the children he fathered. It is a widely known and accepted fact that Gauguin slept with young 13 and 14-year-old Tahitian girls. While many museums are candid about this predatory tendency of Gauguin, more can be done to shift the conversation about how women of color, and in this case Polynesian girls, are characterized through art.

Gauguin’s “Contes Barbare, or “Barbarian Tales,” illustrates two young girls, topless and sitting timidly in a garden while Gauguin creepily peers at them from behind. While the use of bright colors and wondrous imagery is eye catching, ultimately, the message is unsettling, especially after knowing Gauguin used his sexual freedoms to exploit young Polynesian women. 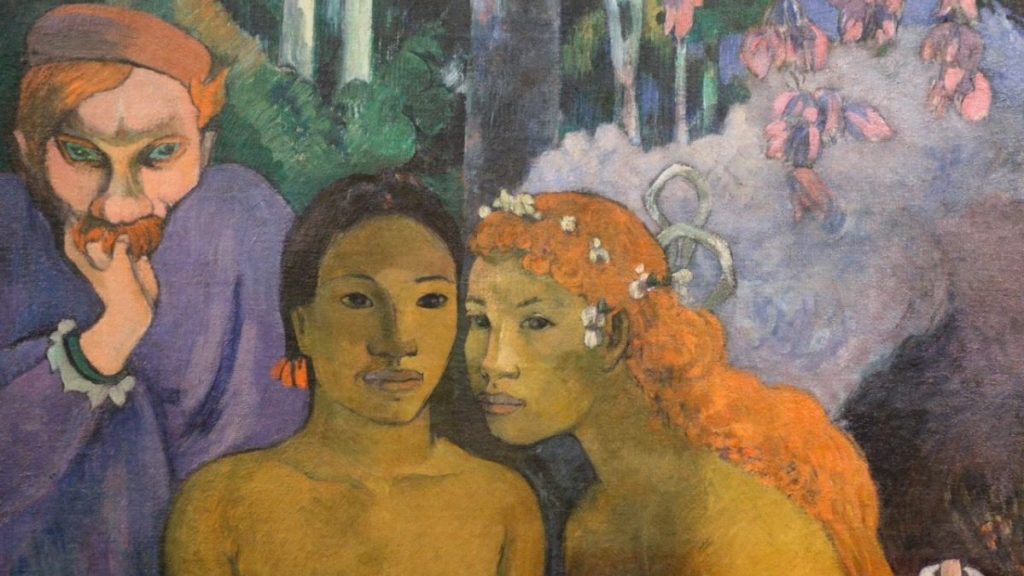 Gauguin continues to be revered to this day. People praise him for having no formal training and for journeying from France to Perú, Martinique and Tahiti, but in our modern context, it is time to reassess his legacy as a whole. Gauguin considered the Polynesian people he painted “savages” and “barbarians,” but with greater historical understanding, such language and depictions have become unacceptable. As time, history and language evolve, it is empirical that art exhibits change as well.

Calling for art to be more mindful of the hyper-sexualization of black and brown bodies may be a “21st-century ideal,” but it isn’t unreasonable or impossible. The Pacific Islands were brutally conquered, and the historical trauma dehumanizing Polynesian women continues to shape the islands to this day. According to the Asian/Pacific Island Domestic Violence Resource Project’s 2017 report, “studies have shown that gender-based violence is very high in the Pacific Islands.” According to UN Women, 68 percent of Samoan women have been abused by their husband, parents or other women. In Papua New Guinea, it’s 67 percent. In the Highlands region, the number is close to 100 percent.

Albeit the work is beautiful and captures a moment in time, transparency surrounding Gauguin’s impermissible relations with his subjects should not be overlooked because individuals in the art community aim to preserve “history” and “art.”

You change it by highlighting Polynesian artists who seek to change the antiquated narrative Gauguin displayed. Pacific Islander communities are well and alive, and rather than display another predatory body of work, renowned and respected art museums should include the work of Polynesian artists such as Tyla Vaeau, the New-Zealand-Samoan who revamped Gauguin’s work by replacing his face in paintings with that of her sister and friend. But if Gauguin’s work is on display, it should be accompanied by more thorough explanations of how the dehumanization of Polynesian women was a colonial tactic in conquering the Pacific Islands as a whole.

Quite frankly, Gauguin’s work captures the journey of yet another European traveler in indigenous land, and it’s not as revolutionary as some would consider it. Worries of Gauguin’s art becoming a political fail to understand that his work was political from the beginning. The early, sexual portrayals of Polynesian girls give into a culture of hyper-sexualization that harms them to this day. I doubt Gauguin’s work will cease to exist. The conversation of reassessing legacies should not end here. Further reevaluation should ensure that artists, art enthusiasts, curators, institutions and museums stop protecting art at the expense of the communities it miss-portrays.