University of Miami students will hold ‘Giving Tuesday’ on December 3rd to raise money for Camp Kesem, a summer program for children whose families are affected by cancer. 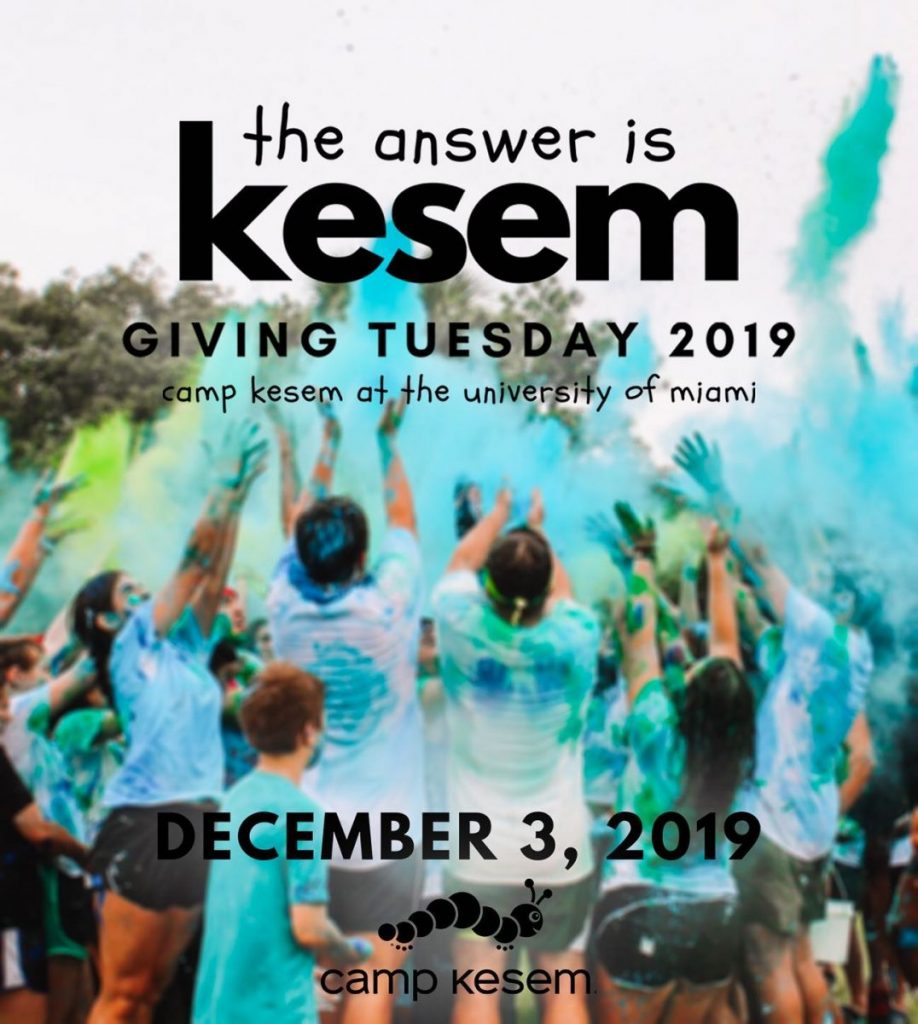 Giving Tuesday is a global day of fundraising, providing organizations such as Camp Kesem with the funds they need. Photo credit: Facebook

Camp Kesem is a national organization made up of 125 college chapters across 44 states. Student leaders on each campus spend the year raising money and working with program coordinators to plan a free camp in their area for children of cancer patients and survivors. The University of Miami’s chapter was founded in 2007.

‘Giving Tuesday’ is the organization’s largest fundraiser held on the Tuesday following Thanksgiving each year. A play on consumer-driven traditions of ‘Black Friday’ and ‘Cyber Monday,’ ‘Giving Tuesday’ for Camp Kesem, is dedicated to making sure the camp comes at no cost to participating families.

“It’s a day where we just try to raise as much money as possible,” said Cody Kline, a development coordinator in charge of fundraising for the UM Camp Kesem chapter. They aim to raise money for more than 170 campers expected next summer. Last year the organization raised more than double their ‘Giving Tuesday’ goal, encouraging them to increase the goal to $50,000 this year. The money goes toward lodging, meals, transportation and daily activities for the campers.

Members have individual goals ranging from $500 to $2,000. On December 3rd from 12- 4 p.m. in front of The Rock, students will do pie-in-the-face challenges, hold ‘coin wars’ against other universities, sell care packages for finals and post special guests on social media to encourage donations. Gabriela Aklepi, a co-director of Camp Kesem at UM, vowed to die her hair blue (one of the camp spirit colors) if she reaches her goal.

Chill-N, an ice cream store near campus, will donate a portion of their proceeds if customers mention Camp Kesem from 2- 10 p.m. that day.

The UM chapter has about 150 members who serve as camp counselors and coordinators each summer. These students aim to give campers a week of community and fun through themed activities in sports, music, art and adventure.

Camp Kesem doesn’t end in the summer– students maintain relationships with campers throughout the year by emailing, sending birthday cards and bringing the kids and their families to campus for ‘reunions.’

“It’s not just summer camp. It’s a year-round partnership between us and the families we serve,” said Gabriela Aklepi. “One time one of our campers got a music scholarship, so we sent a video message congratulating him.”

Gabriela Aklepi, one of the co-directors of Camp Kesem, has been a counselor since her freshman year at UM. She believes a big reason many campers return year after year is the Camp Kesem’s spirit.

The word ‘Kesem’ is Hebrew for ‘magic,’ an important idea counselors try to keep alive during camp. One example is the tradition of campers and counselors calling each other by ‘camp names.’

“One of the goals of camp is to remove the kids from their regular lives and from their regular struggles they have,” Aklepi said. “By using silly camp names, it’s an opportunity to have this alter ego where they’re really able to let loose and just be themselves.”

The names stick outside of camp–Aklepi couldn’t recall the last time she called her co-director by her real name. Aklepi’s camp name is Cher, inspired by the protagonist of her favorite movie, Clueless.

Aklepi was inspired to get involved after experiencing cancer through her own friendships.

“Three kids I know all lost their mothers to cancer in the same summer,” said Aklepi. “A child seeing a caregiver in that state, especially at a young age when they depend on their parent so much, is really scary.”

One of Aklei’s most rewarding moments at camp was when a shy young camper volunteered to sing at the talent show.

“She brought a book and read all day. She hadn’t really opened up a lot,” said Aklepi. “We were all shocked. This young girl who had been so scared and unsure felt so loved and safe that she performed in front of the entire camp.” 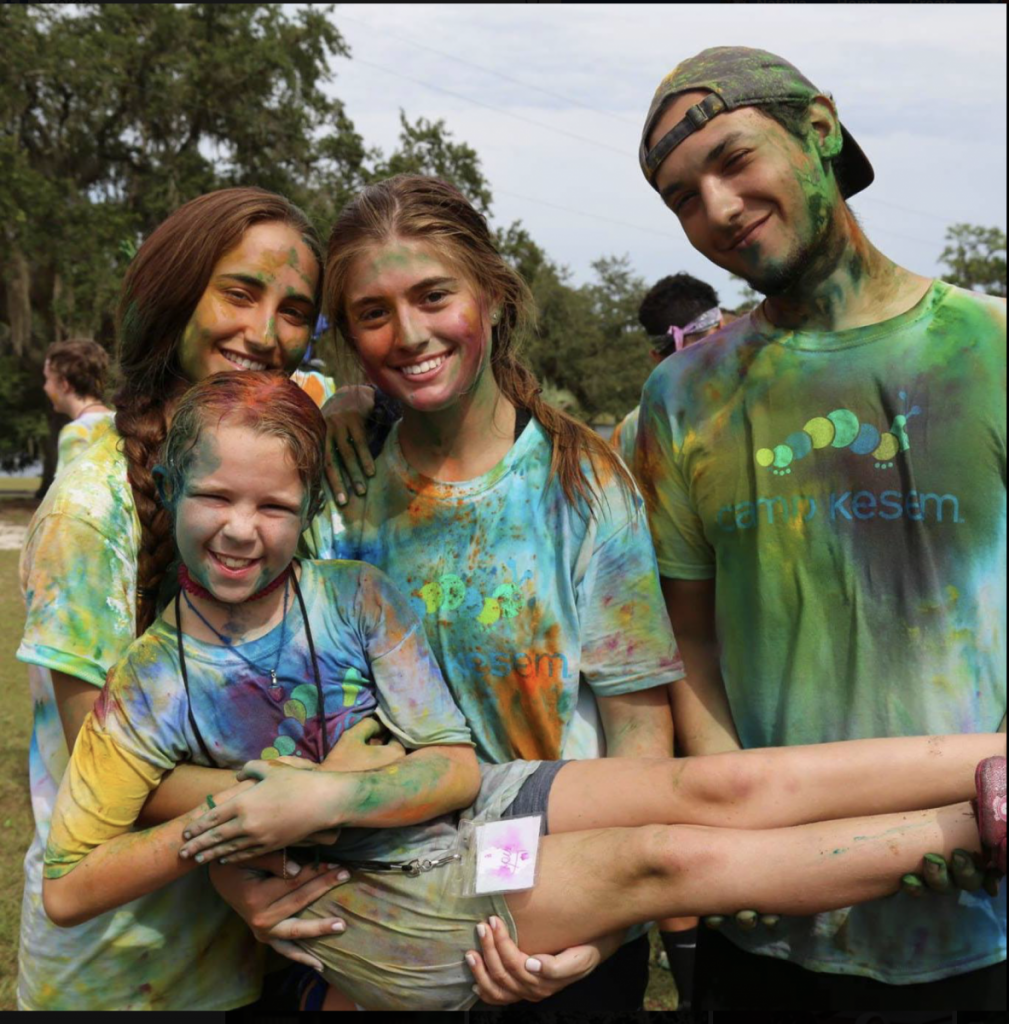 For the campers, Camp Kesem is more than a regular summer sleepaway camp. Matthew Calle, a former camper and current counselor, didn’t want to go to Camp Kesem at first.

“I imagined it would be a pity camp where counselors would hang out with kids feeling sorry for them,” said Calle. “But I ended up finding a family more amazing than any group of people I’ve ever met.”

He attended camp for three years and this summer will be his second year as a counselor.

“The camp isn’t about cancer,” said Calle. “It’s about giving back the childhood these kids have been robbed of. Now as a counselor I’m able to help do that.”

The camp hosts kids ages 6 to 18, allowing many kids to do as Calle did and come back each summer. Samantha Waddell, a counselor for the past two summers, estimated that 60-70 percent are returning campers.

“It’s amazing to see how much the kids grow each year,” Waddell said. “It becomes like a family. It’s taught me that you never know what’s going on in someone’s personal life, so you should treat everyone the same.”

Preparation for Camp Kesem 2020 began the day after camp ended in 2019. Counselor evaluations, leadership board applications and fundraising plans start immediately to ensure things run smoothly the following summer. ‘Giving Tuesday’ is one of many fundraising efforts put on by the organization to reach its total goal of $165,000.

People can help by donating at donate.kesem.org/team/251214 and then scrolling down and picking the University of Miami.