L Brands, the owner of Victoria’s Secret, officially announced last Thursday that its annual fashion show is canceled. The televised event was an integral part of the holiday season for the past 24 years, featuring A-list models such as Kendall Jenner and Gigi Hadid as well as popular musicians such as Selena Gomez and Ariana Grande.

In a statement released Nov. 21, Stuart Burgdoerfer, the chief financial officer and executive vice president of the brand, said the show “was a very important part of the brand building of this business,” but like all good things, it must come to an end.

Burgdoerfer explained that this is definitely not the end of the brand as a whole, but simply a way for the company to evolve and change the way that consumers interact with the brand.

“We think it’s important to evolve the marketing of Victoria’s Secret,” he said. “We recognize and appreciate that the communication of the brand, the offerings— the emotional content of Victoria Secret is obviously an important thing. We’re figuring out how to advance the positioning of the brand and best communicate that to customers.”

This news did not come as a shock to many. The show— which once attracted over 10 million viewers and was undeniably their largest marketing method— had its lowest ratings and viewership ever during their last go around. This is reflective of the struggling company as a whole, as sales and earnings for the label are steadily declining.

The news also came after multiple celebrities, large publications and even former models called out the brand for being anti-feminist and non-inclusive.

On “Watch What Happens Live with Andy Cohen,” former model and actress Kate Upton expressed her concern over the company’s current attitudes.

“You know what, we are sick of seeing the same body type,” she said during the television program. “You have to be body inclusive now. Every woman needs to be represented. Otherwise, it’s a snoozefest.”

“Dear Victoria’s Secret, you said trans women can’t sell the ‘fantasy’ so here I am as a TRANS WOMAN selling the FANTASY! Everyone is beautifully unique. Embrace your differences. Stand tall in who you are! Live your fantasy and don’t let anyone tell you otherwise.”

Following the announcement, Twitter went wild with reactions ranging from critiques of the brand’s lack of diversity to praise of Rihanna’s Savage X Fenty, the show’s presumed successor. 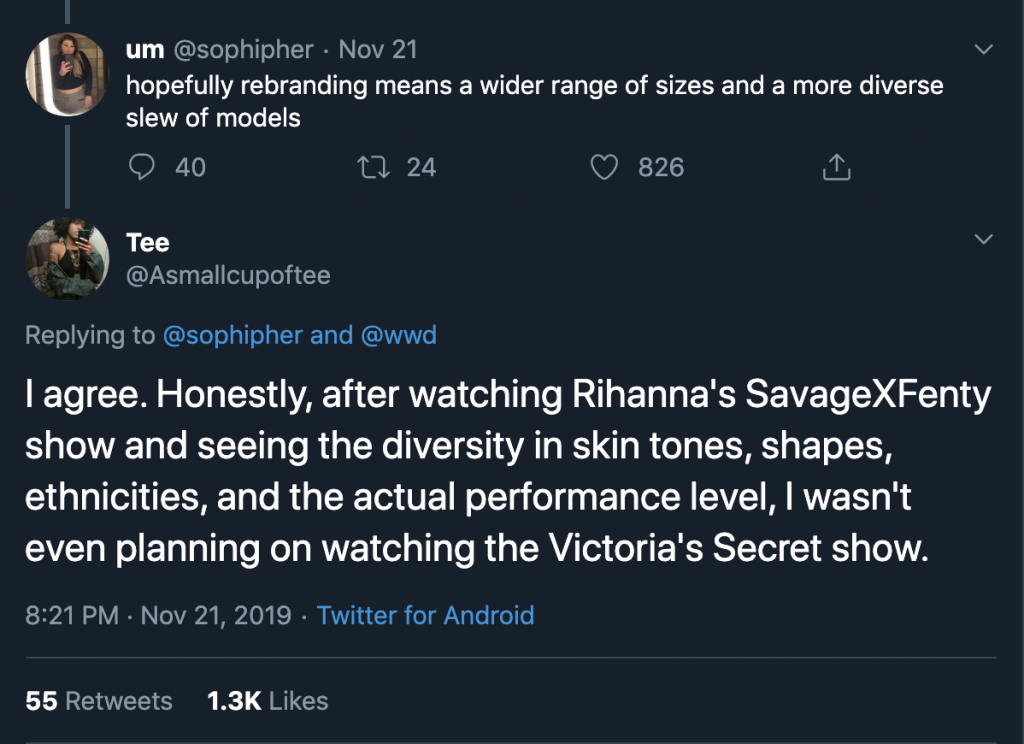 Other’s mourned the show’s cancelation, with one user proclaiming “Victoria’s Secret fashion show is cancelled and my heart is broken.”

L Brands did not explicitly state whether this cancellation is strictly temporary while they try to get back on their feet or whether this annual event is gone forever. For that, we will just have to wait and see.