Miami stunned by FIU at site of former Orange Bowl

For a team that used to dominate at the Orange Bowl, the Miami Hurricanes looked as though playing on the grounds of the former storied stadium meant nothing to them.

“Obviously a very, very dark night,” said Miami head coach Manny Diaz. “One of the lowest points ever in this proud program’s history.”

Diaz took responsibility for his team’s 30-24 loss, the first in history to FIU since the two began playing each other in 2006.

“Whether it was turning the ball over, third down, red zone, penalties, as poor a performance as we’ve had all year,” Diaz said. “I take responsibility for all of that. We just did not give ourselves a chance to win this game.”

Quarterback Jarren Williams, who was coming off a six-touchdown performance against Louisville two weeks ago, looked like a completely different player, throwing three interceptions while completing 19 of 36 passes. 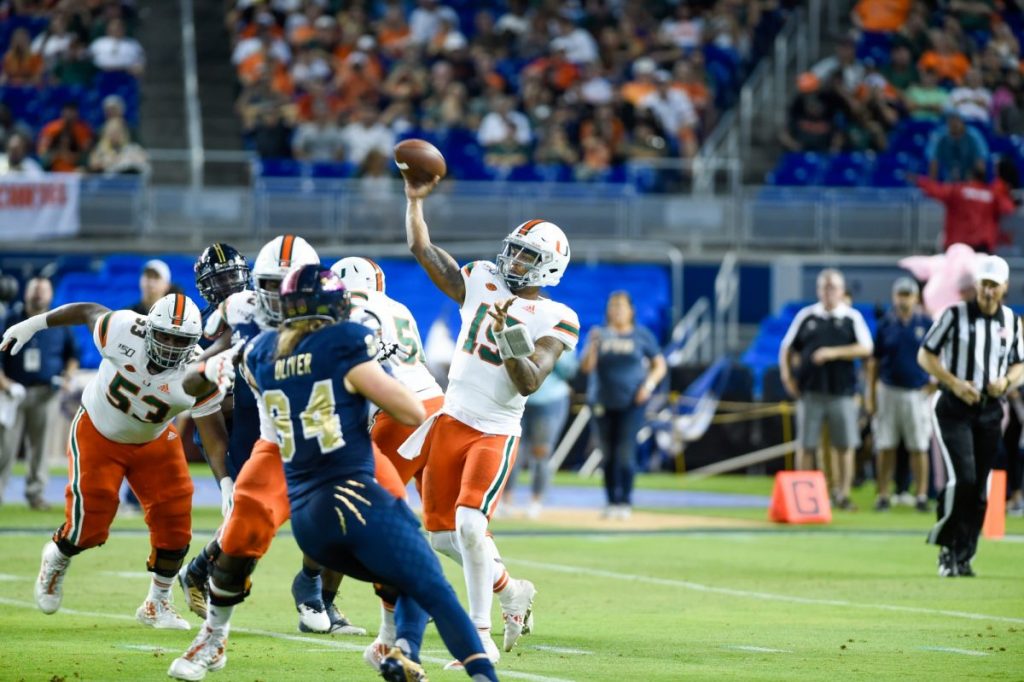 On Miami’s first offense possession of the game, Williams threw a pass directly to an FIU receiver, who returned it to Miami’s 23-yard line. The Panthers kicked a field goal a few plays later to go up 3-0.

“I would say I wasn’t as sharp as I normally am and I wan’t as decisive today,” Williams said.

Defensively, Miami struggled tremendously early on, and allowed FIU quarterback James Morgan to orchestrate an 80-yard drive that ended in a 29-yard touchdown pass to receiver Shemar Thornton that gave FIU a 10-0 lead.

The Panthers’ 10-point lead held up until the very end of the second quarter, when Miami defender Trevon Hill was called for an unsportsmanlike penalty, which gave FIU the ball at Miami’s 33-yard line, and allowed FIU kicker Jose Borregales to make a 50-yard field goal that put the Panthers up 13-0 heading into halftime.

In the second quarter, Miami running back DeeJay Dallas went down with an apparent elbow injury and did not return to the game. 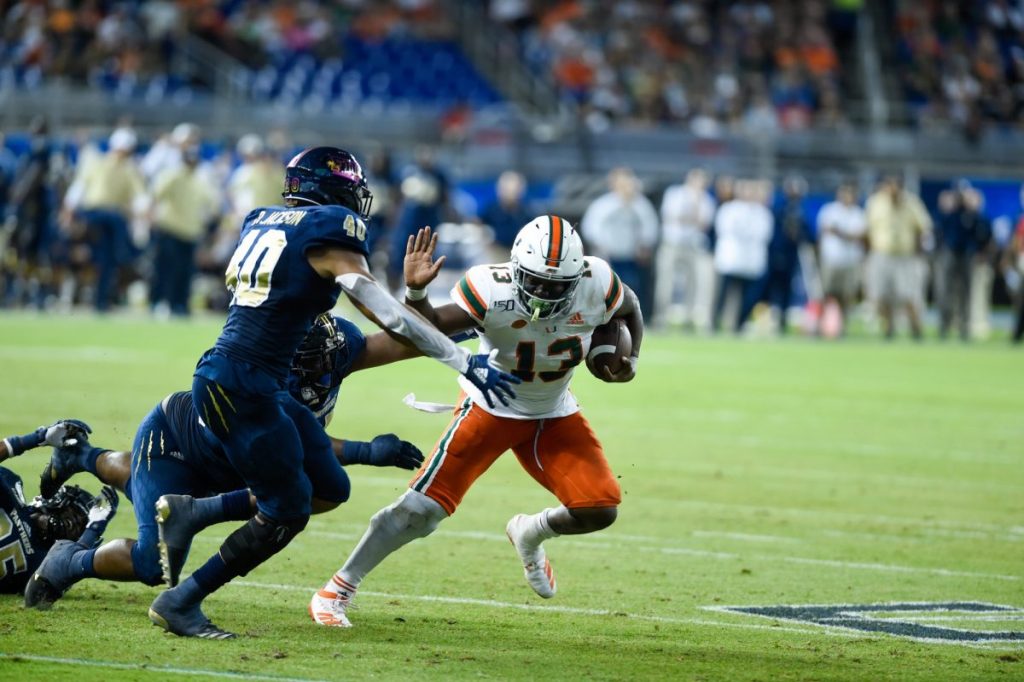 DeeJay Dallas was injured in the second quarter and did not return to the game. The running back has reportedly suffered a dislocated elbow. Photo credit: Jared Lennon

“Deejay is a huge loss,” Diaz said. “Not just what he does as a player, but he is as important from a leadership aspect of anybody we have on our offense and in our entire program.”

Before the injury, Dallas had nine carries for 50 yards.

Miami opened the second half with a second interception thrown by Williams on a deflection of a pass that went right through the hands of receiver Dee Wiggins.

A few possessions later, Williams was intercepted for the third time of the game by Jamal Gates, who returned it to Miami’s 28-yard line and FIU took a 16-0 lead after Borregales made a 54-yard field goal.

Miami finally got on the board with under two minutes to go in the third quarter when Camden Price made a 22-yard field goal on a drive that featured a 19-yard rush from Cam’ron Harris and a 21-yard rush from Robert Burns. 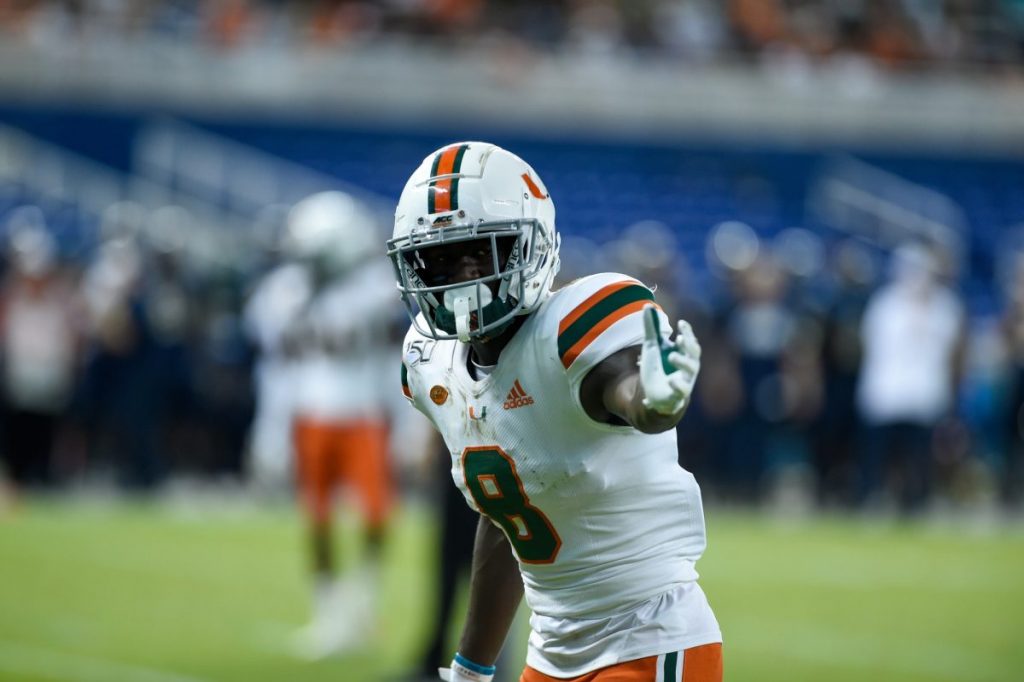 But FIU responded quickly and scored on a 13-yard touchdown pass from Morgan to receiver Tony Gaiter, who was wide open in the end zone after a miscommunication within Miami’s defense. That drive also featured two unsportsmanlike penalties assessed to Nesta Jade Silvera and Romeo Finley on one play that gave FIU 30 additional yards.

“It’s a disappointment,”said linebacker Shaq Quarterman. “It’s just a lot of history here, it definitely hurts. Something that I will own for the rest of my career.”

Early in the fourth quarter, Cam’Ron Harris scored Miami’s first touchdown on a 14-yard rush, but the Hurricanes still trailed 23-10.

A 35-yard touchdown pass from Williams to receiver Mark Pope closed the lead to 23-17, but on FIU’s next possession, running back Anthony Jones scored on a 37-yard rush, effectively putting the game out of reach at 30-17 with a little over two minutes to go.

Miami scored again on a three-yard pass to Dee Wiggins with under a minute left in the game, but the damage had already been done.

Miami has a week to prepare before heading up to Durham, North Carolina to face Duke in its last regular season game.