Former Miami Hurricanes running back Mark Walton was waived by the Miami Dolphins after the second-year player was arrested and charged with aggravated battery early Tuesday morning in Davie, Florida.

According to police records, Walton had been in an argument with the mother of his unborn child, who is five weeks pregnant, when he allegedly shoved her into a wall and struck her in the face and head. Police were called to a residence in Davie around 4:15 a.m. Tuesday. The victim suffered a swollen left eye. 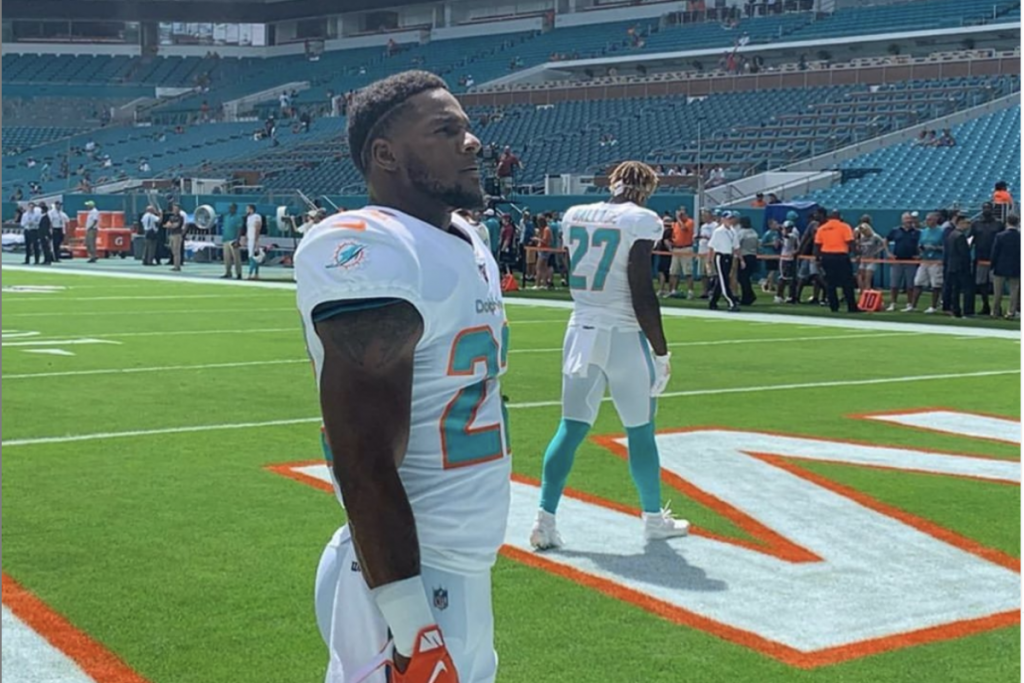 Former UM running back Mark Walton was cut from the Miami Dolphins after being arrested for aggravated battery. Image source: Instagram, @markwalton

“We were made aware of a police matter earlier this morning regarding Mark Walton,” said Dolphins general manager Chris Grier in a statement on Tuesday. “We hold our players to a high standard and take these matters very seriously. We will have no further comment at this time.”

Walton was released on a $10,000 bail Wednesday while being ordered by Broward County judge Jackie Powell to obtain substance abuse evaluation and to refrain from having contact with the pregnant woman.

Tuesday’s incident is the fourth time in 2019 that Walton has been arrested. He was arrested in January for a misdemeanor drug charge, was charged with battery Feb. 16 and was arrested on felony charges April 3 for reckless driving, marijuana possession and carrying a concealed weapon. All charges were either dropped or resulted in probation.

Walton was in the middle of serving a four-game suspension imposed by the NFL for his prior three arrests, with two games remaining before reinstatement. However, in light of Tuesday’s development, he now faces an uncertain future both on and off the field.

The Booker T. Washington graduate played for the Miami Hurricanes from 2015-2017 before he was drafted by the Cincinnati Bengals with the 112th overall selection in the 2018 NFL Draft. At Miami, Walton was the team’s starting running back his sophomore year and rushed for 1,117 yards and 14 touchdowns. In 2017, as a junior, Walton played in four games before suffering a season-ending ankle injury.

Walton had ascended to the top of the Dolphins depth chart after the team traded fellow running back Kenyan Drake to the Arizona Cardinals. Walton’s 201 yards this season are still a team-high.