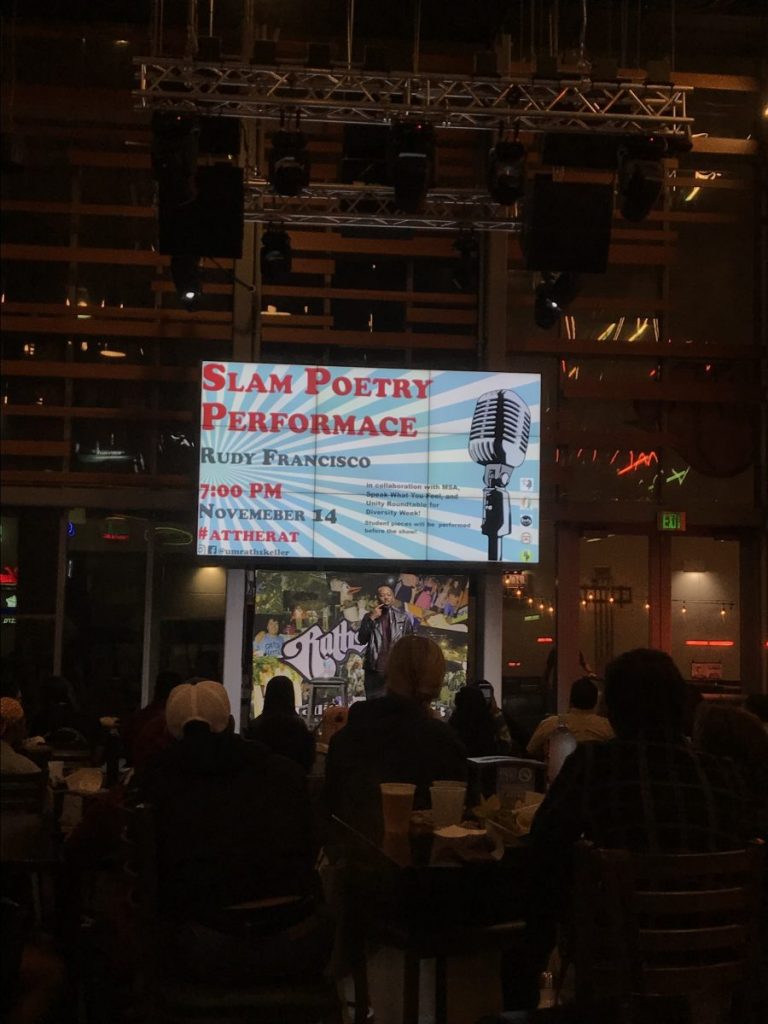 Sipping on beverages and snacking on the Rathskeller’s famous “No-Yes” fries, students and visitors at the Rat listened to celebrated slam poet Rudy Francisco, 37, pour out words describing his life experiences on Thursday, Nov 18.

Those in attendance included members of Multicultural Student Affairs, The Unity Roundtable, Speak What You Feel and the Rathskeller Advisory Board (RAB). “Spoken Word” was hosted as part of Diversity Week on campus.

“This is the first time I can remember that we are doing a professional slam poetry performance,” said senior Stephanie Perez, chair of RAB. “It’s also the first time this collaboration between all of these organizations is happening.”

The event began with four student openers who read their own work before Francisco, a San Diego native, took the stage.

Francisco engaged the audience in a call and response, during which he prompted them to shout “Say what!” back at him.

“We’re all family,” said Francisco, who has performed on “The Tonight Show Starring Jimmy Fallon” twice. “You can interact with me.”

The 2010 champion of the Individual World Poetry Slam began with the reading of a poem titled “A Few Things I Strongly Believe.” It featured several seemingly silly proclamations such as “I believe Cinnabon is made by angels,” and also made more serious declarations like “I believe masculinity is a wet fish that most men are just trying to hold onto.”

Francisco said criticism helped him become more in touch with himself when writing poetry. He shared an anecdote when he first began writing poetry and his best friend told him that he would only applaud his poems because they were over.

“He told me to write something about me that’s just really honest,” Francisco said.

That moment is what inspired Francisco’s poetry moving forward. Now, his poems cover topics, such as his struggle with depression, violence, police brutality and uncertainty in his parenting skills of his three-year-old daughter.

Despite his success, Francisco said that he still has a lot of insecurities but uses them as inspiration for his poetry.

“I am just an awkward teenager who became an awkward adult,” said Francisco, who began writing poetry his senior year of high school.

Marin said she has been a fan of Francisco’s poetry for a few years now after discovering him on Youtube.

“He really drew my attention,” Marin said. “He’s the only poet I keep up with.”

Gonzalez said Marin and himself are avid concert-goers, so a slam poetry reading was a change of scenery for them.

“It was way more quiet than what we’re used to,” Gonzalez said. “It was so interactive that it felt like he was talking to you.”

Francisco finished his performance by telling the audience that he is appreciative of people who want to hear what he has to say.

“I just want people to know what I stand for,” Francisco said.