Home » The Hurricanes could make it to the ACC Championship Game. Here’s how.

The Hurricanes could make it to the ACC Championship Game. Here’s how.

The Miami Hurricanes’ 52-27 win over the Louisville Cardinals Saturday not only continued the team’s newfound momentum after a slow start to the season, but allowed the team to clinch bowl eligibility. Ultimately, the win keeps Miami in the crowded race for a spot in the ACC Coastal Division conference championship game.

Clemson’s win over North Carolina State Saturday night allowed the Tigers to clinch the Atlantic Division’s title and earned them a spot in the title matchup.

The Canes can still mathematically join Clemson in the conference title, although the road to Charlotte got narrower this past weekend in spite of the Saturday’s win. 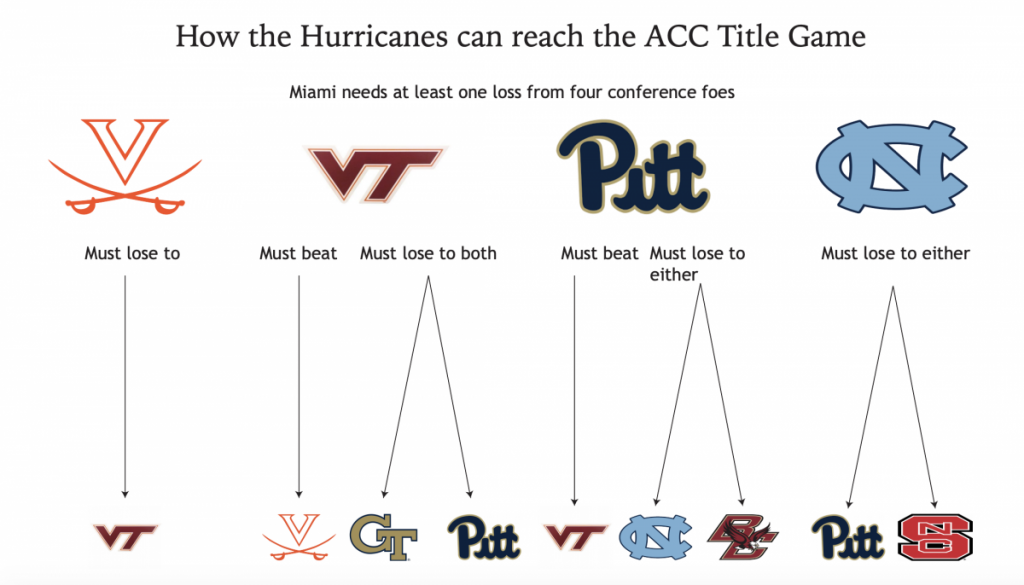 In order to climb to the top of the division standings and get the opportunity to avenge their 38-3 loss to the Tigers in 2017, UM will have to jump Pittsburgh, Virginia Tech and Virginia, while also holding off North Carolina.

All scenarios here assume that Miami will defeat Duke in the regular season finale on November 30, which is the Canes’ lone remaining conference game in 2019. But beyond that, Miami will need some help to move up the standings.

First, the Canes must hope for at least one Pitt loss. The Panthers’ 3-2 league record sees them sit a spot above UM via win percentage, but Miami’s 12-10 win at Pitt on October 26 gives the Hurricanes the tiebreaker between the two teams and requires Pittsburgh to lose just one remaining conference game. Pitt has UNC, Virginia Tech and Boston College remaining on their schedule, but it would be advantageous for the Panthers to lose just to BC— an Atlantic Division foe— to avoid giving another Coastal rival an extra win.

Virginia Tech has the same 3-2 record as Pitt, but holds the tiebreaker over Miami due to their 42-35 win in Miami Gardens on Oct. 5. Therefore, the Hokies need to lose twice for the Canes to jump them. VT has Georgia Tech, Pitt and Virginia remaining on their schedule, and though they need to lose two out of three of those matchups, they must beat in-state rival UVA for Miami to have a shot at winning the division.

That is because the Cavaliers, who sport a 5-2 ACC record, would fall to 5-3 by losing to their lone remaining league contest, which could equal UM’s final conference mark and give the Canes the nod based on a head-to-head tiebreaker, decided on October 11 after Miami beat Virginia 17-9.

And finally, North Carolina, who sits behind the Hurricanes in the standings but has an extra conference game and holds the head-to-head tiebreaker over the Canes, must lose one of its remaining ACC games. That loss may come against either Pitt or NC State.

Assuming UM beats Duke in Week 14, six external matchups will seal the program’s fate in the Coastal Division. Miami will need four of those games to finish with a decisive result, and hope that one of the two remaining games also goes their way. The path to Charlotte isn’t wide by any stretch, but still exists for the most hopeful Hurricane fans looking for the team to reach the game for the second time in program history.