The personification of the American Dream, Anthony E. Varona went from being an immigrant child of working class bodega owners to the new dean of Miami Law School.

Varona was born in Cuba in 1967 but moved to New Jersey because his parents did not want their children to grow up indoctrinated with the communist ideology. 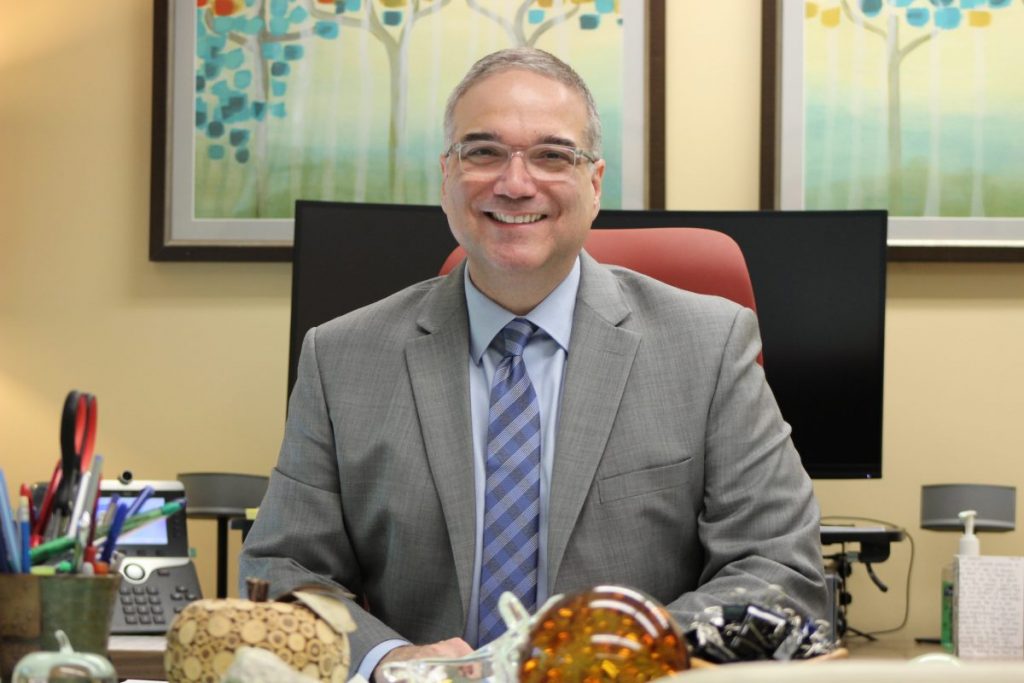 Anthony Varona assumed his position at the beginning of the fall semester as the first hispanic and openly gay dean of UM's law school. Photo credit: Noor Khaled

Throughout his childhood, Varona spent many weekends and vacation days helping his parents operate their small business that sold groceries mostly to fellow migrants in the Newark area. His parents managed to gather enough money to send their two sons to college. Varona attended Boston College earning majors in French and political science.

After his undergraduate career, he naturally gravitated toward the legal field, prompted by his experiences growing up as the only English-speaking person in the family for many years. He was frequently assigned the role of translating for family members at government offices as they arrived from Cuba. Varona said that his family’s migration to America greatly influenced his decision to go to law school.

“I was exposed to the plight of immigrants, of struggling new Americans, and the necessity for very good advocacy and services,” said Varona.

“The other thing that I started to see very early on in my life is that law is limited in what it could do for individuals. [It is] the lawyers, often through very effective and intelligent lawyering, [who] can sort of fill the gaps in law and make sure to do that what is possible so that what is achieved is really justice.”

Varona went on to obtain a Juris Doctorate from Boston College, his second degree from the same institution. Afterwards, he practiced at the Federal Communications Commission at the honors program as an enforcement attorney while also pursuing a Master of Laws at Georgetown University.

After a few years at the FCC, Varona went into the private sector, working at law firms doing communications and media law. While there, he did pro bono work for the Human Rights Campaign, the nation’s largest LGBTQ+ civil rights organization.

“Ultimately they recruited me to come in-house to HRC and start their legal department,” he said. Varona was the first general counsel and legal director for the Human Rights Campaign.

During his time at HRC, he was an adjunct professor at Georgetown University Law Center.

“That’s when I really thought that I needed to go into teaching full time,” he said.

Varona taught for three years at Pace Law School and was then recruited away by American University Washington College of Law where he worked for 14 years, receiving tenure. He was promoted to vice dean during this time but wrapped up his work at American University when he took a sabbatical.

This year, he was approached with a special opportunity.

“I was contacted by the search firm that was leading the effort to hire the next team for Miami Law, and the rest is history,” Varona said.

Varona has made history in his newest position at the University of Miami; he is the first Hispanic and openly gay dean of the Law School. He said although he’s received many invitations to apply to various deanships at other academic institutions, UM was the first school that he seriously considered.

“This was the very first nomination that I received where I felt viscerally that I had to pursue the opportunity, one that taps all of my experience and skills,” Varona said.

During his first 90 days of his deanship, Varona has been getting to know as many students and professors as possible and conducting what he calls a “listening and learning tour.”

Despite the endless lunches, dinners, coffees, town halls and receptions, Varona said he is most motivated by the potential for making the school even better.

As Varona outlines his plan and vision for the future of the law school, he is determined that they coalesce around three overarching principles– excellence, prominence and community.

He has promised to the law school community, via a circulated email early on in his tenure, the elements of his specific vision. These include promoting faculty work, elevating the law school, ensuring student legal employment after graduation and helping students pass the bar on their first try.

Outside of a day’s work on the university campus, the dean enjoys spending time with his husband, John, traveling and going to Broadway shows.