Home » Williams proves he is ‘our guy’

Williams proves he is ‘our guy’

Despite being pulled after throwing three interceptions against Virginia Tech and then not starting against Pittsburgh three weeks ago, head coach Manny Diaz remained adamant that “Jarren is our guy.”

And Saturday night against Louisville, quarterback Jarren Williams showed that he should have been the guy for Miami all along. 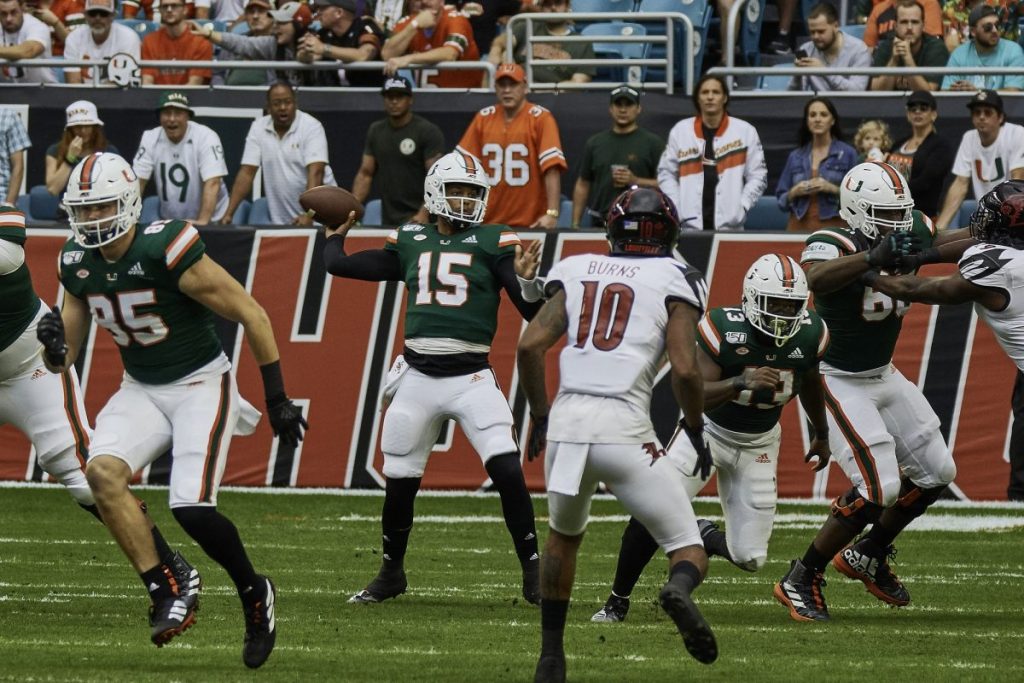 Not only did Williams lead Miami to a historic win, but he made history himself, throwing six passing touchdowns, breaking the record for number of passing touchdowns thrown in a single game by a Miami quarterback. Williams surpassed the likes of former Miami greats Bernie Kosar, Steve Walsh, Ken Dorsey, Brock Berlin, Kyle Wright and Stephen Morris, who all threw five touchdown passes in a single game.

If you take away the three interceptions that Williams threw against Virginia Tech back in early October, the redshirt freshman quarterback would have 16 touchdowns and zero interceptions. Completing 67 percent of his passes, Williams has undoubtedly proved that he can and will continue to lead the Canes to success. And that is something that has Diaz very excited for the last few games.

“It’s starting to look the way we want it to look,” Diaz said after the game,

Throughout the season, Diaz has consistently spoken about changing the culture of the program and up until this game, most people remained doubtful that the culture would be shifted, let alone changed.

It has become evident based on a dramatic improvement on both sides of the ball that the players are starting to understand what it means to play for the Miami Hurricanes. The players are holding each other accountable and that has translated into on-field success.

“I knew the foundation that we were building a program on. It wasn’t a hope or a whim that these are values that will win. It wasn’t my decision,” Diaz said. “This is how they have won at the University of Miami for a long, long time, which is practicing at an extraordinary high and competitive level. The missing element was the little bit of accountability for the little extra that, to me, makes a difference in a performance that you saw today than what you saw a month ago. The best part is that the players get it.”

In addition to the historic night, Miami also became bowl eligible with the win.

“Let’s go bowling, I’m ready,” said running back DeeJay Dallas the moment he stepped onto the podium during the post-game press conference.

The Hurricanes still have two regular season games left. The team has a bye this weekend, but will face FIU at Marlins Park on Nov. 23 and Duke on Nov. 30 in Durham, North Carolina.

If Miami is able to win out the rest of their season and finish at 8-4, they should make a higher-tier bowl than previously thought. There is also still a small chance that Miami could win the ACC Coastal Division and play in the ACC Championship.