Founded in 1926 by Bowman Foster Ashe with the opening of the University of Miami, the Iron Arrow Honor Society remains the highest an individual can attain at the school. Iron Arrow is a sanctioned clan of the Miccosukee tribe which uses some of its traditions.

Each spring and fall, members of Iron Arrow tap a new class of UM students, faculty, faculty or alumni who exhibit the values of the society. 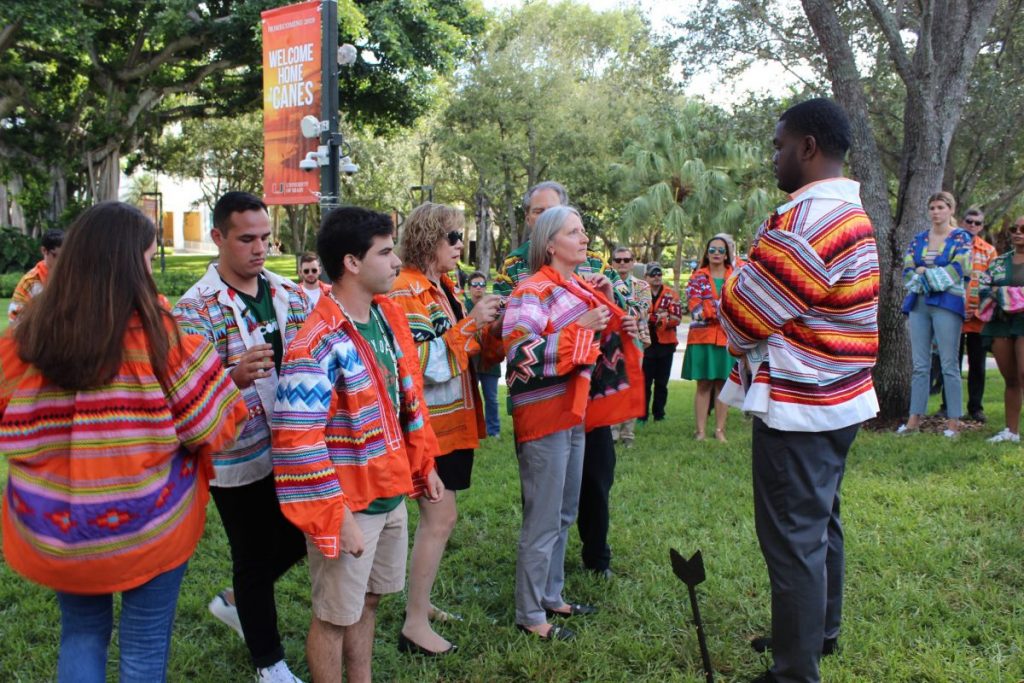 On Wednesday Nov. 6 at the Medical Campus and Thursday Nov. 7 at the Coral Gables campus, 15 new members were tapped into Iron Arrow. Among them was Mavel Morales, a senior majoring in music education, who said she was overjoyed to be given the same recognition as so many others who she respects and admires.

“I’m not someone who enjoys attention or recognition in any way and having it at this level was overwhelming, but made me feel nothing but love and appreciation for the university community,” she said.

Being tapped into Iron Arrow led senior Shruti Karnani, a neuroscience major, to feel grateful for her mentors who were with her throughout all of college, she said.

“It’s such an honor to be tapped in but also an opportunity for me to really appreciate the people who helped shape me into who I am today,” Karnani said.

Alumna Annette Gallagher, an adjunct lecturer at UM, was also tapped. She described the moment as a dream of hers for 25 years.

In the time leading up to her tapping, she heard the distinguished beat of the Iron Arrow drum, a tradition gifted to Iron Arrow by the Miccosukee tribe.

“When you’ve been around as long as I have, you know the sound,” she said. Gallagher, who graduated in 1994 with majors in broadcast journalism and political science, described hearing the drum as it got closer and closer to her and then suddenly stopped. She turned around in disbelief, and was grabbed by her boyfriend and close friends, all members, and led to the Iron Arrow mound for the official tapping.

At the mound, the new members were gathered together, addressed by Iron Arrow Chief Dewayne Washington, and gifted their new jackets and beaded necklaces.

“Being tapped into Iron Arrow means that one truly goes about their daily life to make the University of Miami better,” said Washington, a senior majoring in finance. “This group comes from different corners of this campus and we know they will learn from each other and current Tribe members to assure they continue to properly promote and elevate what they do on campus.”

“Iron Arrow has never been a goal for me, nor should it be a goal for anyone,” Gallagher said. “But I think that anybody who genuinely loves UM, should have that desire to be part of what is essentially the heartbeat of UM.”