“I think the game just came down to us making too many errors, but I think we played a pretty good game,”said freshman Kennedy Prince after the loss. “I think we have a lot we can learn from this match.”

Miami found themselves down two sets to one after dropping the first and third set to the Cardinals. The Canes responded by taking four of the final five points of the fourth set and also holding Louisville to a .154 hitting percentage. The fifth set was the closest of them all, with 13 ties. After being tied at 15, Louisville ended the set scoring two straight points including a game-winning block. The match had 29 ties and 12 lead changes altogether.

Although Miami wasn’t able to come away with the win, head coach Jose “Keno” Gandara said he likes the way the team responded after not playing their best at the start of the match.

“I felt like game three we were way down and we battled back, not playing our best and it was a close game at the end, so we used that as motivation” Gandara said “We don’t have to play our best game, we just have to manage the edge and flow a little better. I thought we did that.”

Lukianova led Miami with 21 kills and Vach had 52 assists. Miami was most dominant in the third set, recording a .407 hitting percentage.

The Canes will next face NC State on Nov. 15 at the Knight Complex.

Mompremier’s double-double helps Miami win season opener
What does Homecoming mean to U? 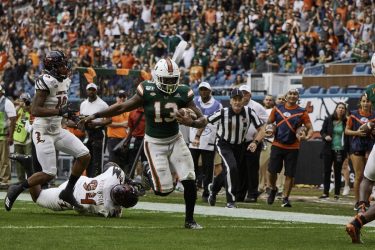 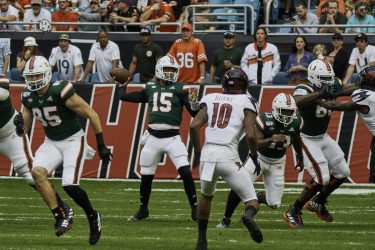