Before tonight, no quarterback in Miami history had thrown for more than five touchdowns in a single game.

Jarren Williams’ six touchdowns broke that record and led the way for Miami as they defeated the Louisville Cardinals 52-27 Saturday night at Hard Rock Stadium.

“We felt like a performance like this was coming,” said head coach Manny Diaz. “The way we set the tone, the way we came out early in the game was fantastic.”

“You come to this place to do something that no one else has done. I really just keep my head down and keep grinding and good things happen,” Williams said. 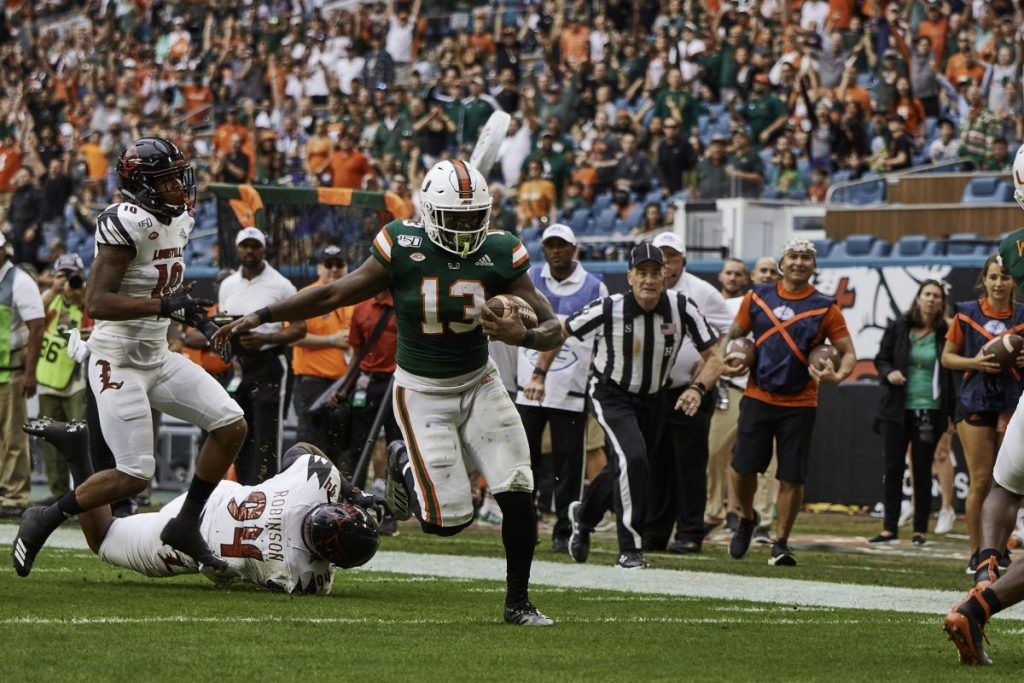 Despite the record-setting performance, Williams said he was focused on getting the win for his team.

“I honestly like didn’t know, I was so into the game, I wasn’t even thinking about the record,” Williams said. “I was just worried about getting the win.”

Running back DeeJay Dallas got Miami on the board first, scoring on a five-yard touchdown run. Dallas finished with two touchdowns on 96 rushing yards and 14 receiving yards.

A quick 80-yard touchdown pass from Louisville evened the score at 7-7, but on the next drive, Miami needed only one play to score as Jarren Williams threw a 67-yard pass to Dee Wiggins for Miami’s second touchdown of the game.

After forcing Louisville into a quick three-and-out, KJ Osborn returned the punt 38-yards and Dallas scored a touchdown on a 14-yard pass from Williams to put the Canes up 21-7.

After Louisville opened the second quarter with a touchdown thrown to tight end Earn Pfiefer, Dee Wiggins made a leaping grab in the end zone for Miami’s fourth touchdown of the game, extending the lead to 28-14. 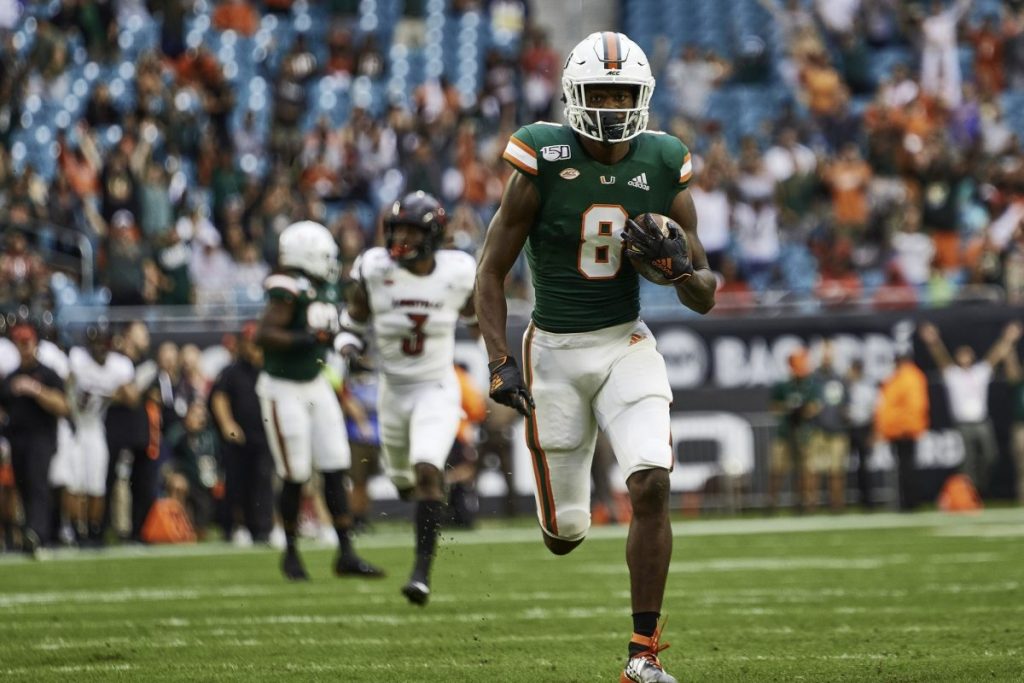 Dee Wiggins (8) breaks away from the defense on one of his two touchdowns. Photo credit: Josh Halper

Williams found tight end Will Mallory wide open in the end zone on a 17-yard touchdown pass, giving Miami a 35-14 lead that held into halftime.

Miami continued dominating on the offensive, starting off the third quarter with a 31-yard touchdown pass from Williams to Mike Harley.

Three minutes later and Louisville scored a touchdown of their own on a one-yard rush from Louisville quarterback Micale Cunningham. Cunningham went 12-18 with 219 yards, a touchdown and an interception.

Miami was forced to punt on their next drive, but Louisville’s punt returner fumbled the ball and it was recovered by Jimmy Murphy at Louisville’s 23-yard line, giving Williams the opportunity to throw a 28-yard touchdown pass to Harley, his second touchdown of the game.

“It was just perfect timing, all the hard work paying off,” Harley said on his two touchdown performance. “It’s my brothers that are behind my back, my coaches that believe in me and trust in me.” 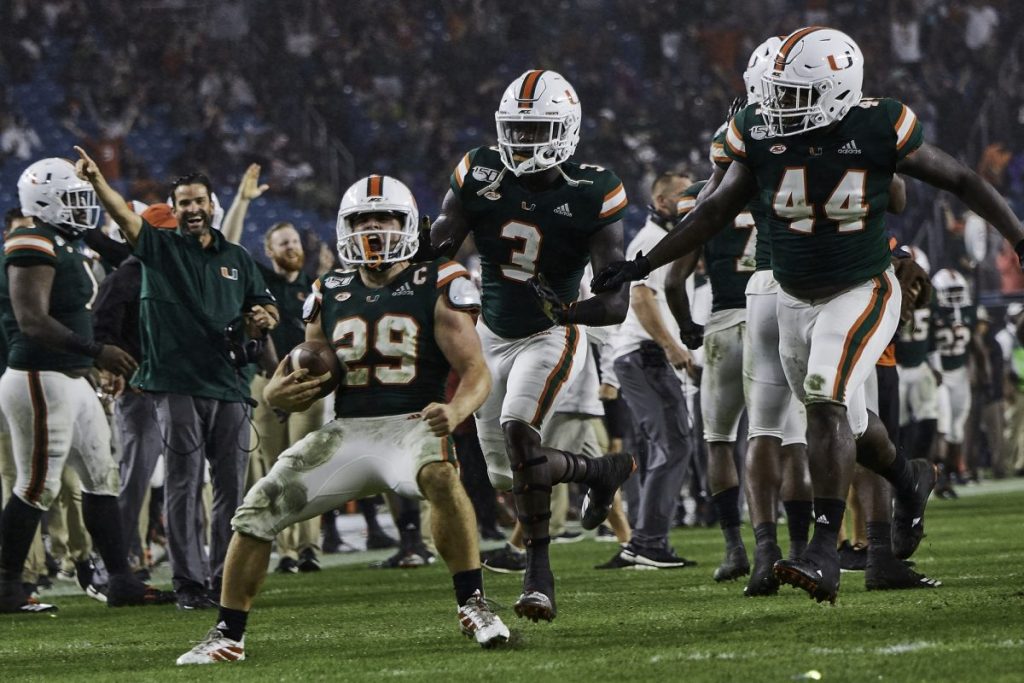 A 24-yard field goal by Camden Price on the Hurricanes’ next possession before Louisville’s last touchdown gave Miami a 52-27 lead, which remained that way for the rest of the game.

Despite the offensive showing, Miami gave up 496 total yards of offense, but DJ Ivey and Al Blades Jr. each had one interception.

“Defensively, obviously we gave up a couple of big plays and that was discouraging, but as the first half wore on, we got enough stops to create separation on the scoreboard,” Diaz said

With the win, Miami officially became bowl eligible, and Diaz is hopeful that the team can continue to play at a high level.

“It’s starting to look the way that we want it to look. We are hoping that this is now what we can be going forward,” Diaz said. 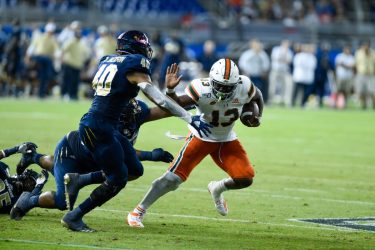