Resurrection Drums is a percussionist’s dream.

Located in Hollywood, Florida, the business has become “the largest drums-only store in the United States,” even forging an informal partnership with the Frost School of Music that has lasted 25 years.

In the words of Steve Rucker, head of jazz drums at the Frost School of Music and former drummer for the Bee Gees: “In order to really experience the place, you have to set aside the day. You know, hang out with the dog, check out some gear, talk to Jeff.” 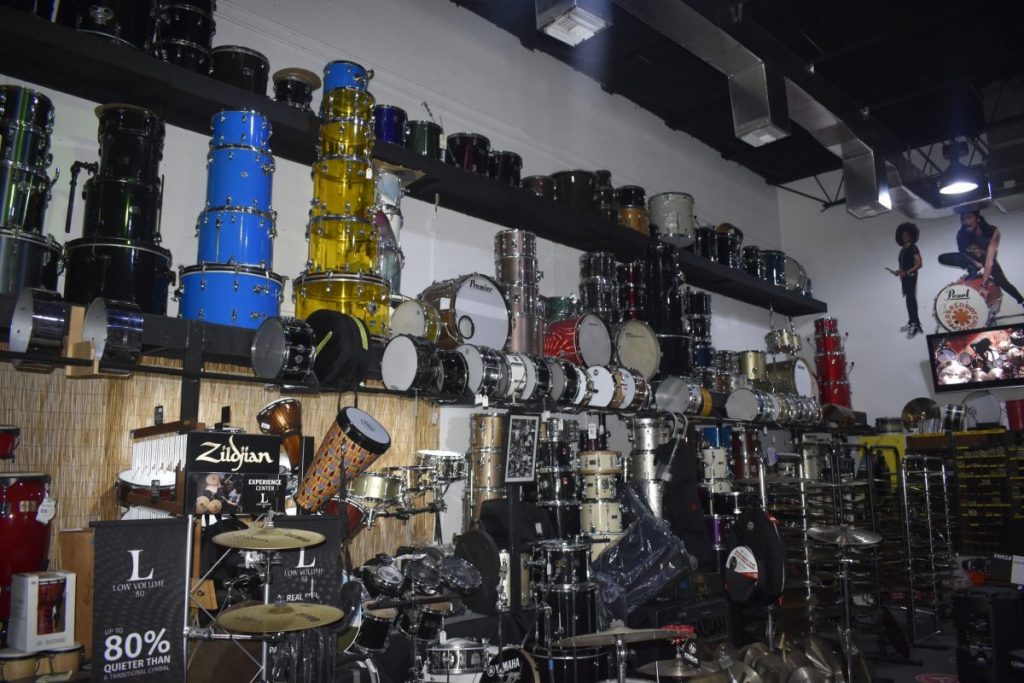 From the first step inside, Resurrection Drums, greets customers with wall-to-wall drums of every imaginable shape, size and sound. Anything a percussionist could ever dream of playing is available, from auxiliary woodblocks and cowbells to high end cymbals and cutting edge full kits. Photo credit: Elina Katrin

Rez Drums, as many call it, is the product of three decades of craftsmanship and perseverance.

“Rez Drums started at a warehouse in 1983. It was a drummer and his carpenter brother-in-law resurrecting drums,” said owner Jeff Lee.

Now very successful, the business undeniably came from humble beginnings. The original owners were evicted from their warehouse by the state of Florida and later opened up locations across South Florida before finally settling in Hollywood.

At the time, Lee was not yet involved. But over 10 years before he took over Rez Drums, his zeal for all things drum related led him to Steve Rucker.

“I knew about the U, so I just went down there and knocked down doors until I met Steve and said, ‘Dude, let me just pay you to study privately because I wanna get better.’” Lee said.

Lee also recalled how he originally got started working in the store, saying, “I started teaching here in 1989. I started working the floor after a while because I knew everybody that came in the door.”

“Jeff and I obviously go way back,” Rucker added. “Because he’s this enormous Canes fan, Jeff told me ‘Anybody who comes into town and wants drums or equipment, come on in, and I’ll give them the big discount.'”

He even remembered his disbelief when Lee once turned away a Gator Cases sales representative because of UM’s rivalry with the Florida Gators.

As the store develops, Lee said he believes that there is a fundamental difference between Rez Drums and the Guitar Centers of the world: the employees.

“The kids there don’t have the knowledge we have,” he said. “I’ve been playing since I was six, and I just turned 60.” Lee added that while many of his employees have been working with drums for years, chain stores have a high turnover rate and employees who are less committed and experienced. 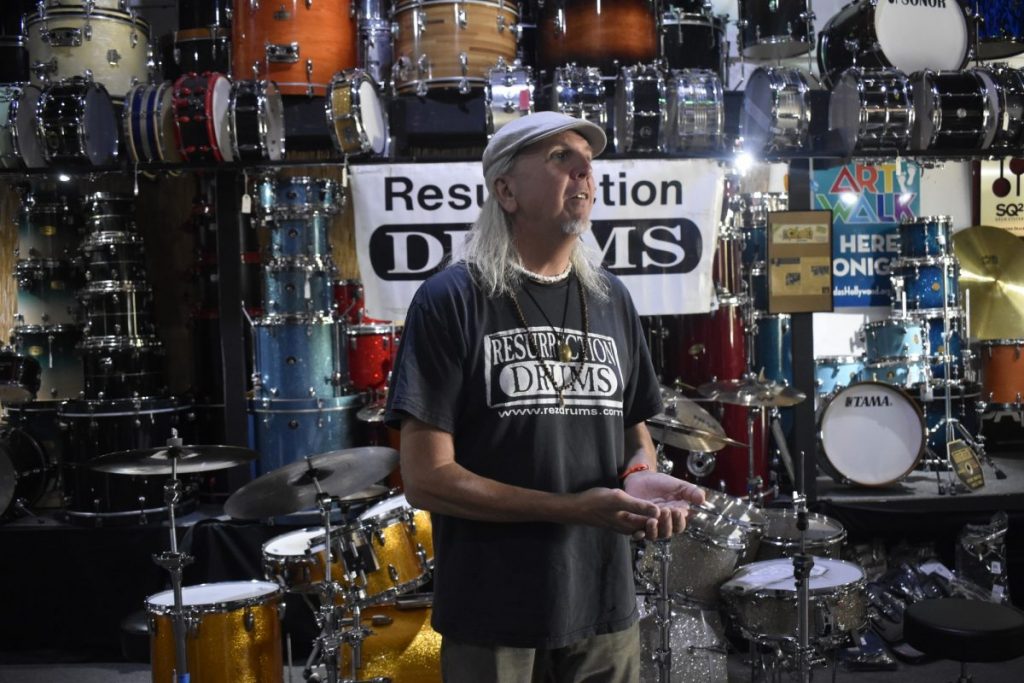 Jeff Lee started working at the Resurrection Drums roughly thirty years ago. Now the owner, he is sure to maintain the principles that the company was built on: individual relationships. Photo credit: Elina Katrin

One of Rez Drum’s biggest distinctions is “the shop” they have on site, where Lee and the crew regularly hand make drums available for purchase. Now, after owning the store for more than 20 years, the level of craftsmanship is higher than ever. Rez Drums is authorized by multiple international manufacturers to hand-build drum sets for them, including one kit which Shannon Leto took on tour with rock group Thirty Seconds to Mars.

“They know their reputation is at stake and that we do exceptional work,” Lee said of Sonor, the company that asked Rez Drums to build the kit. “That kit was gonna be heard by a million people, so Sonor wants that drum set to sound amazing.”

Unfortunately, though Rez Drums has serviced many high profile clients and hosted guest clinicians like Styx drummer Todd Sucherman– as is the case with many small businesses– the store has not always prospered.

“This is not a wealth making job,” Kline said.

Together, he and Lee have observed drastic shifts in the industry, many of which have been a result of technology.

“It’s destroyed the business model,” Kline said. “Instead of encouraging and motivating and exciting people to go out to music stores and check stuff, it’s like, ‘Oh, I’ll just sit on my iPad and check it out online.'” 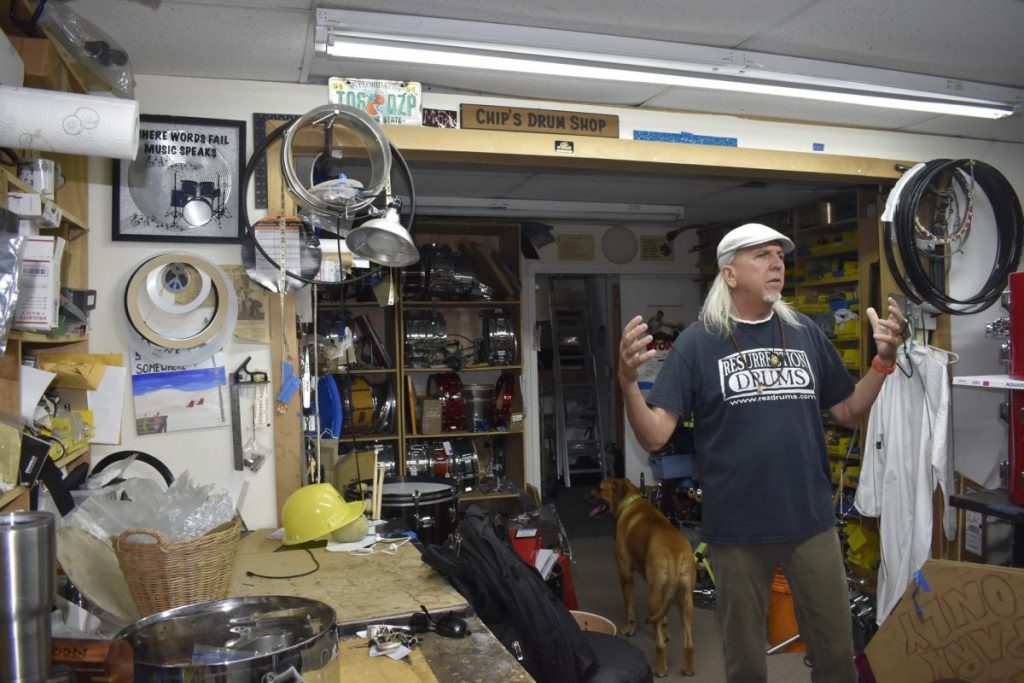 But in the face of that adversity, the tight-knit drumming community has allowed Rez Drums to survive for so long.

“There’s a culture here,” Kline said. “It doesn’t matter who you are, where you’re from, what you love, what you look like, everyone can be themselves here.”

In that way, the store continues to offer each and every drummer who comes through Frost a sense of purpose and community.

“We give you the right tools, so your art can get across the way you want it to get across,” Lee said, adding that those tools are often what separates the elite drummers from the average ones.

He explained how this dynamic plays out in real world auditions: “Two drummers, we can come in, we can both play just as good. You can have a drum set that’s dialed in that has just the sounds you want, and mine, I could not really know what I’m doing, and you’re gonna get hired.”

At the end of the day, their business model remains dependent on individual relationships.

“It’s so important to create a community and make people aware,” Lee said.

That personal connection is exactly what’s kept Kline coming back to the store for 25 years.

“Jeff is like my older brother, and he’s a beast of a player,” he said. “I’ve got mad respect for him, working with him for 25 years.”

Women’s basketball to capitalize on experience, depth this season
You should care about Canadian politics