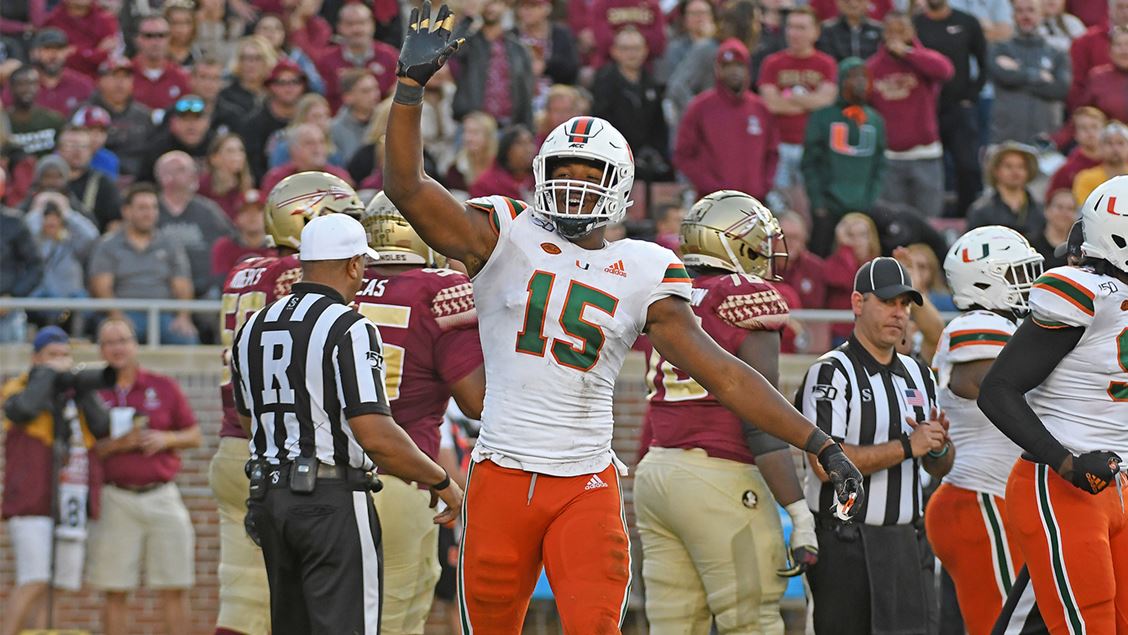 In a season full of defensive inconsistencies, offensive struggles and field goal mishaps, Miami put the first eight games of the season behind them and won the biggest matchup to date. In their third consecutive win in the rivalry series, the Miami Hurricanes never trailed in a 27-10 win at Florida State’s Doak Campbell Stadium.

“We’re becoming what we thought we could become as a team,” head coach Manny Diaz said after the win. “And to do it at Doak Campbell Stadium, like I said, I couldn’t be more proud.”

While fans may wish that the team turned in a performance like the one seen Saturday a few weeks earlier, Miami is now 5-4 and are now on the bubble of the race in the ACC Coastal Division.

UM fired on all cylinders when it mattered most. Quarterback Jarren Williams proved he can sling the ball deep downfield, hitting receiver Jeff Thomas in the end zone for 39 yards in the first quarter for the game’s opening score. Williams followed with a 56-yard connection to Dee Wiggins in the final quarter to effectively put the game out of reach. The redshirt freshman finished 21-37 with 313 yards and two touchdowns.

The long, downfield throws were something that Williams has taken some heat for not being able to consistently hit, but Saturday brought some of the quarterback’s best plays this year.

The Lawrenceville, Georgia native also applauded the improvement of the offensive line protection, which gave him more time to stay in the pocket and throw the ball.

“Up front we’re young, but you know it’s week nine, they got a lot of games under their belt,” Williams said. “They got a great feeling for the game and kind of understand different situations and different things the defense does to try to throw us off. I feel like each game they are getting better and better and better.”

Fans have been wondering why aspects of last year’s Hurricane defense had disappeared for most of 2019. After finishing first in the country in tackles for loss a season ago with 10.5 per game, that number has slipped to a modest 7.5 per game this year, tied for 17th best in the country.

But Miami’s defense came out of the gates with an attitude on Saturday and didn’t slow down until the fourth quarter clock hit zero. The defense allowed just 203 yards while forcing two turnovers and recording nine sacks and 16 tackles for loss.

Defensive end Gregory Rousseau had a historic outing, with eight tackles, including four of the team’s sacks and five tackles for loss. The redshirt freshman from Hialeah is now tied for the most sacks in the country at 12 and was named ACC Defensive Lineman of the Week.

“You can see he has some really god given talents that he does a great job utilizing,” defensive coordinator Blake Baker said. “There’s not a lot of guys in college football that can do the things that he can do.”

Growing increasingly irritable with the lack of apparent progress that the Seminole program had been making, Saturday’s game was the final straw for Florida State, as they officially fired head coach Willie Taggart on Sunday. Taggart is now owed an $18 million buyout, which FSU officials say has been raised by boosters. Defensive line coach Odell Haggins Jr. will serve as the interim coach. The next Florida State head coach will be the third in four years.

“It’s unfortunate,” Diaz said on the Joe Rose Show on 560-AM Monday morning.

Winning on the road is one thing, but to defeat a rival in their house is simply everything that Canes fans could’ve asked for going into the weekend. Miami’s program took a big step forward. With three games left in the season, Miami will most likely have to win at least one of them to be guaranteed a bowl game.

This week, the Hurricanes face Louisville at Hard Rock Stadium, then FIU at Marlins Park and finally Duke in Durham, NC. Louisville and Duke present a tough test, but after this weekend’s performance, its safe to say that all three games are winnable. Ending the season on a five game winning streak would give Miami a chance to play in a better bowl than many would have expected a few weeks ago.