Arguably the biggest test for the Miami Hurricanes in the 2019 season came in the final match, a Halloween showdown against the No. 3 North Carolina Tar Heels. A pair of UM goals that bookended halftime gave the home team the lead in the second half, but a UNC equalizer and game winner in the waning minutes of the game would give the Tar Heels a 3-2 win.

It was a goal from the Heels’ Brianna Pinto that got passed a crowd near the net in the 84th minute that sealed the final result.

Miami goalkeeper Tyler Speaks made seven saves, each of those keeping the Canes in the match until the last whistle. UM was outshot 21-3 Thursday, with the Tar Heels firing the first eight shots on the night until Miami broke through. 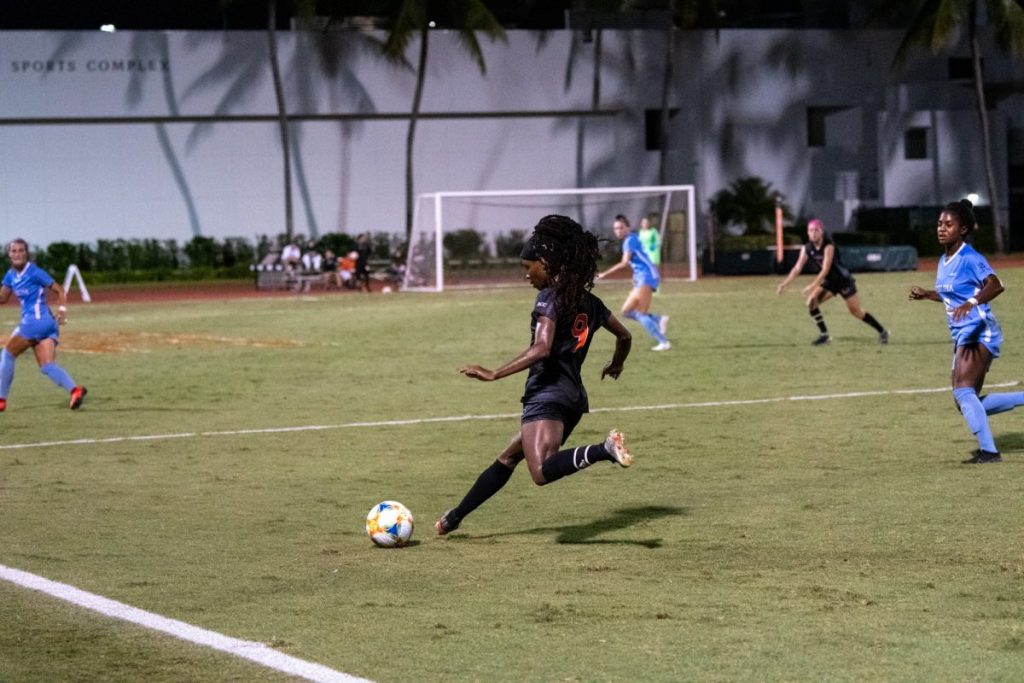 Dejah Cason (7) kicks the ball towards goal. The senior played in her last game on Thursday. Photo credit: Jared Lennon

Momentum shifted in the Canes’ favor after Tia Dupont leveled the match at one in the 42nd minute, followed by Michelle Giamportone’s header in the 47th that gave UM a 2-1 lead. Sierra Frey and Bayleigh Chaviers recorded the assists on the goals.

“We knew they [UNC] were going to have the ball a lot,” head coach Sarah Barnes said. “Our thought process was to make sure we had our defensive set correct, and then step out and get pressure on the ball. I think that was the difference in the second half of the first half. The first goal came off a defensive stop right around midfield…a counterattack off of that.”

Barnes applauded her team’s continued aggression after the break.

“When you are playing a quality opponent and you score at the end of the half, you do have the momentum, it does give you a little confidence. I though the team started really well [in the second half]. It’s something we work on every practice almost. It was just a perfectly executed play,” Barnes said.

The lead stood until the 62nd minute, when UNC’s Zoe Redei goal off a corner kick delivery gave the Tar Heels an equalizer that cut off UM’s mid-game push.

“I think what makes [UNC] so difficult to play against is that they bring in seven subs, seven of their 10 field players come off and get some relief for 15-20 minutes, and they bring their starters back on,” Barnes said. “Eventually, they start to wear you down.”

Speaks stopped the first major chance for either side in the corner of the 18-yard box after dispossessing North Carolina’s Maycee Bell in the 15th minute. But it wasn’t even five minutes later when North Carolina opened the scoring in the 19th minute with a goal from sophomore Rachael Jones.

Sliding stops by the Dunwoody, Georgia native in the 30th, 35th, and 37th minutes kept UM within one and set up DuPont’s goal in the 42nd minute.

“They are wonderful kids,” Barnes said, who has finished her second year at the helm of Hurricanes program. “They’ve been completely bought in since we arrived. It’s always a difficult process to go through a coaching change mid-career. They’ve worked hard and given back to the team. I think the legacy that they’ve left is really powerful. Their work ethic and their passion are going to carry over to these younger players.”

Chaviers’ three goals of the season were second-most among UM players in 2019, and best of all seniors. Fisher and Markwith closely followed with two goals each. Most notably, Fisher never missed a start in her four years with Miami.