Home » ‘I’m Not Lovin It’: Students protest to end animal abuse at McDonald’s

‘I’m Not Lovin It’: Students protest to end animal abuse at McDonald’s

It all started at 8 a.m. Cars honked. People stopped to see the red and black signs proclaiming, “Animals Deserve Better” and “Stop This Abuse.”

On Oct. 25, sophomore Tuana Yazici organized a protest titled, “I’m Not Lovin’ It” to spread public awareness about the practices of fast-food giant McDonald’s. 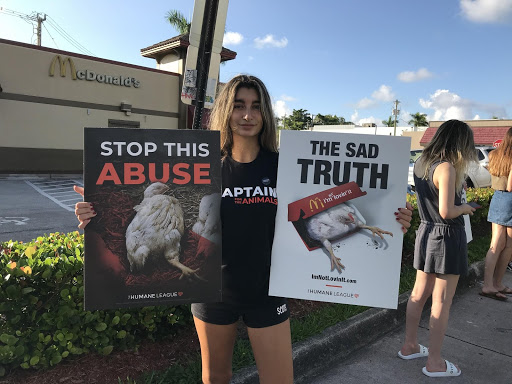 The silent protest was created in partnership with the Humane League, an international nonprofit organization that advocates to end the abuse of animals raised for consumption.

Founded in 2005, the Humane League works alongside large fast food companies including Burger King and Subway to advocate for cage-free and humane treatment of chickens.

As a result of their efforts and policies, 20 million hens in the United States are now cage free.

Yazici, a politics, philosophy and economics triple major, said that McDonald’s has been abusing animals for years and has failed to change their practices, unlike the 150 companies that the Human League monitors for fair animal treatment.

“Our purpose is to spread awareness about what McDonald’s is doing,” said Yazici, a captain of the Human League. “We are protesting because of the inhumane policies that they have while raising chickens.”

Princeton professor and mentor to the activist, Peter Singer encouraged Yazici to become involved in the organization because of her passion for farm animal welfare. After applying to work with the organization in the summer, Yazici was offered the position as a captain in August.

In her current role, Yazici is responsible for recruiting, identifying, and leading individuals in Miami to grow the community of activists and organize protests such as “I’m Not Lovin’ It.”

According to the Humane League website, McDonald’s chickens are bred to grow larger at a faster rate which often leaves the chickens to become paralyzed, as they are unable to hold all of the weight. The chickens are usually kept in overcrowded and dark barns where they are deprived of a natural cage-free life.

“If humans grew at a rate similar to McDonald’s chickens, they would weigh 660 pounds at just two months old,” says the organization’s website. 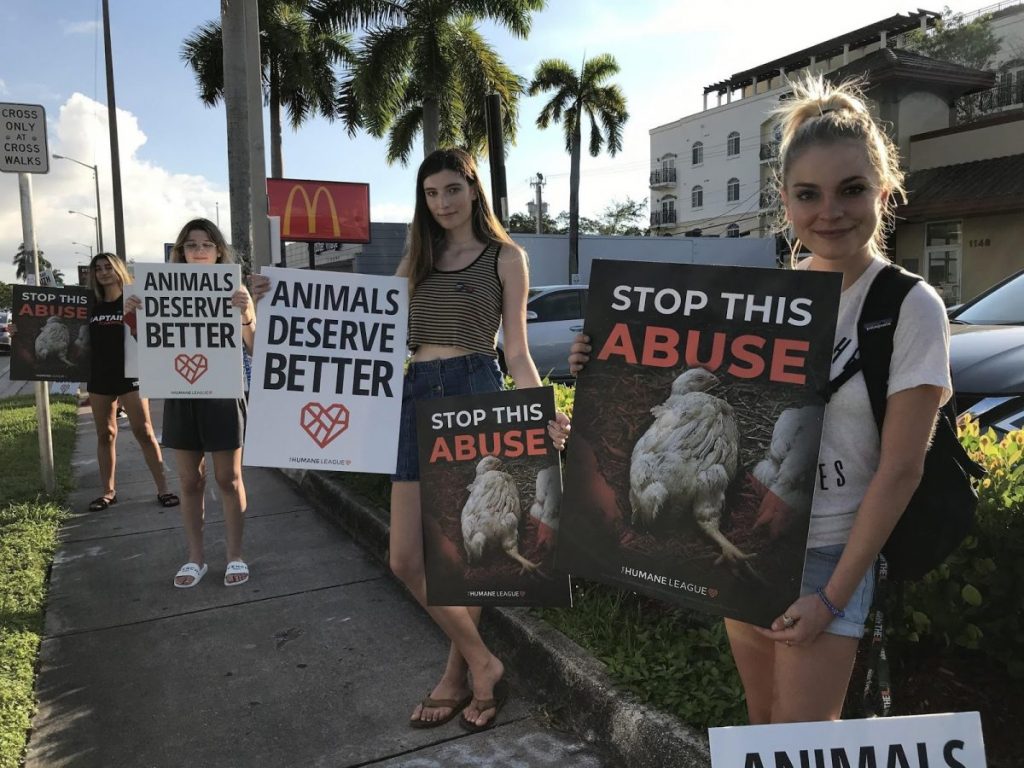 Students from the University of Miami, including senior Talula Thibault (far right) protest outside of the McDonald's across from campus. Photo credit: Tuana Yazici

Senior Talula Thibault attended the protest to bring awareness about the maltreatment of animals and to address the environmental implications of animal agriculture.

“Our message is simple and straightforward: animals deserve better,” the ecosystem science and policy and geography major said. “I’m sick of protesting this. I want people to wake up already.”

Sophomore Emma Schillerstrom also attended the protest and is advocating for people to research the effects of meat consumption on farmers.

“The whole meat industry is having a lot of problems that is destroying the lives of farmers because they are forced to enforce these horrible practices in their own establishments,” said the marine science major. “It’s not just an animal rights thing; its a human rights thing.”

For information about The Human League and future protests, visit their website here.