After spending the last two weeks on the sidelines, Jarren Williams entered the game as quarterback with a little over seven minutes remaining in the game and led the Canes on a game winning drive that gave them a 16-12 lead.

The 32-yard touchdown pass from Williams to KJ Osborn secured Miami’s fourth win of the season, who are now 4-4. The late game call to put Williams in for starter N’Kosi Perry paid off for head coach Manny Diaz. 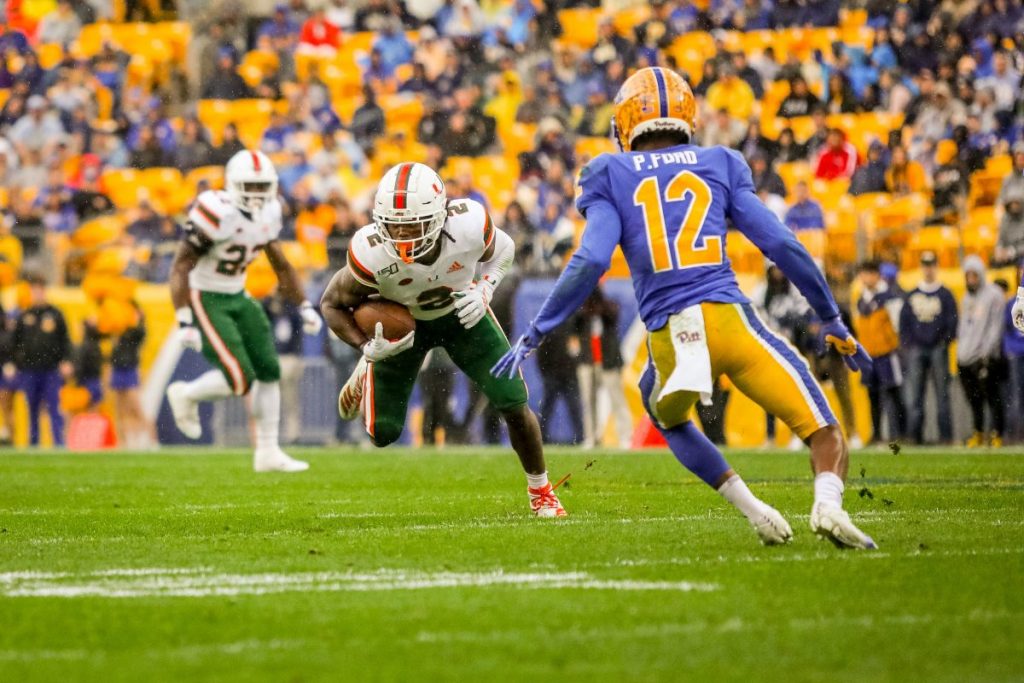 “We really felt like we needed a spark,” Diaz said. “We knew we were going to have to throw the football to have a chance to win the game. We were just stuck in the mud throughout the entire third quarter so it was just time to give Jarren a shot and see if he could get something sparked and get something going.”

An eight yard rush from Williams on third and two set up the winning touchdown. Williams finished the game with 50 passing yards, completing four of eight attempts with one touchdown while playing in just two offensive series.

With Jeff Thomas not playing due to suspension, Osborn became the go-to receiver. The senior led Miami with six receptions for 94 yards and one touchdown.

“It feels so good to win,” Osborn said. “I was just trying to make a play for my team.”

Aside from the late game offensive showing, the Hurricanes defense was the star of the game, seemingly overcoming last game’s meltdown and putting on a strong performance in the win Saturday afternoon.

The defense held Pitt to only field goals throughout all four quarters. Miami forced three turnovers, all in the first half. DJ Ivey led the way with two interceptions and Gurvan Hall recovered a fumble that was forced by Bubba Bolden, who got his first start, in the first quarter.

“We felt like we had obviously been in a little bit of a barren patch with turnovers, but we also know that those things tend to come if you stay after it and stay resilient,” Diaz said. “Credit to our guys that they down down the field, including getting it to the one yard line, but we still refused to let them into our end zone and gave us a chance to win.”

Pittsburgh quarterback Kenny Picketts did not make it easy for Miami’s defense. Pickett, who showed his ability to run with the ball, had 146 passing yards and 44 rushing yards, but threw two interceptions and no touchdowns. Defensive end Greg Rousseau led Miami with three sacks and seven total tackles, while linebacker Shaq Quarterman had 12 total tackles.

“I think we just did a great job of corralling him and getting after him,” Rousseau said in reference to Picketts.

The Panthers got on the board first after kicker Alex Kessman making a 54-yard field goal on Pitt’s opening drive. Miami kicked a field goal on their second drive of the game, evening the score at 3-3. Miami’s Camden Price took over at kicker for the game after both Bubba Baxa and Turner Davidson have struggled to make extra points and field goals in previous games.

Miami scored their first touchdown early in the second quarter on a one-yard rush from Cam’Ron Harris, who took the majority of the snaps at running back because DeeJay Dallas was sidelined with a knee injury. Harris finished the game with 60 yards on 16 carries.

But Miami’s game winning drive would seal the win for the Canes, who got their first road win in 50 days.

“It’s a league of very fine margins and today we were the team that made the plays in the critical situations,” Diaz said. “I couldn’t be more proud.”

Miami has a week to prepare before they travel to Tallahassee to face Florida State University in a highly anticipated matchup between two rivals.