Home » Miami falls to 3-4 after loss to Georgia Tech

Miami falls to 3-4 after loss to Georgia Tech

Blame the injuries, special teams, or a 12 p.m. kickoff against a struggling Georgia Tech team that limped into Hard Rock Stadium with just one win, but the Miami Hurricanes committed miscue after miscue as they fell to the Yellow Jackets in overtime.

After Jackets’ running back Jamious Griffin’s one-yard rush into the end zone to start the extra period, Brevin Jordan was ruled short of the four-yard line on Miami’s attempt to score, and the Hurricanes’ fate was sealed.

“Very disappointed in the result today,” said head coach Manny Diaz after the game. “We had more than enough chances to win this football game, some mistakes early on gave [Georgia Tech] hope, gave them life. To their credit they did a good job possessing the football in the second half wearing us down.” 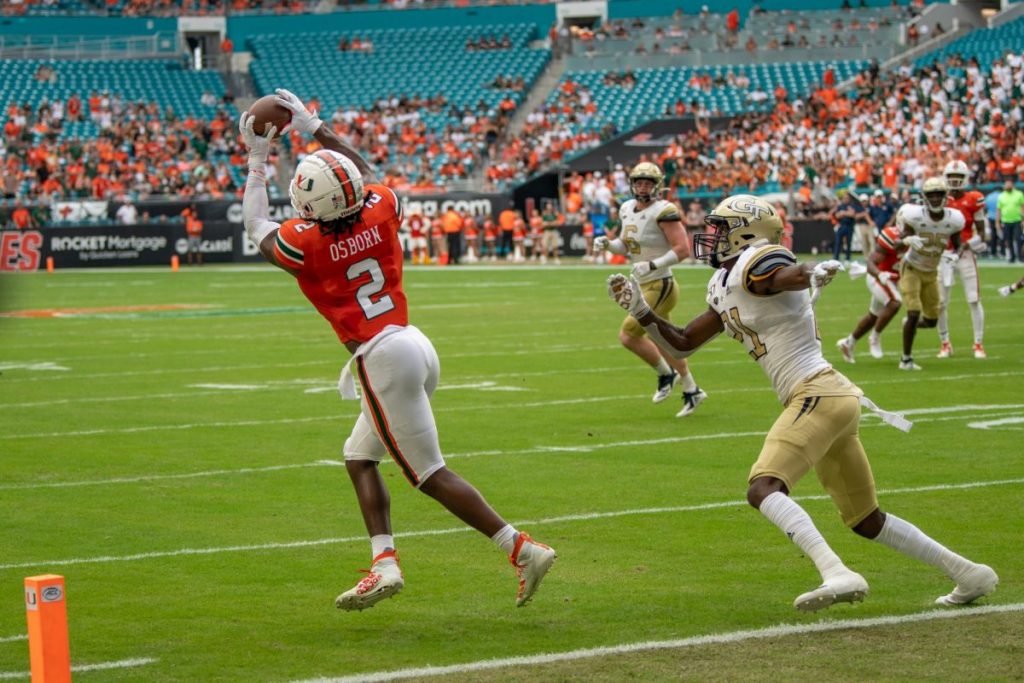 “It is what it is. In the ACC Coastal, games are going to be tight and competitive,” Diaz said. “When you get into close games, not being able to finish drives, it lifts up their sideline, and it’s demoralizing for our sideline.”

The Canes defense got third-down stops on each of their first five opportunities. However, the Jackets connected on six of their next seven plays on third down, from late in the second quarter all the way into the fourth.

Shaq Quarterman led Miami with 13 tackles and two tackles for loss. Romeo Finley had six tackles, while Gurvan Hall had five. Trevon Hill also had two tackles behind the line of scrimmage. 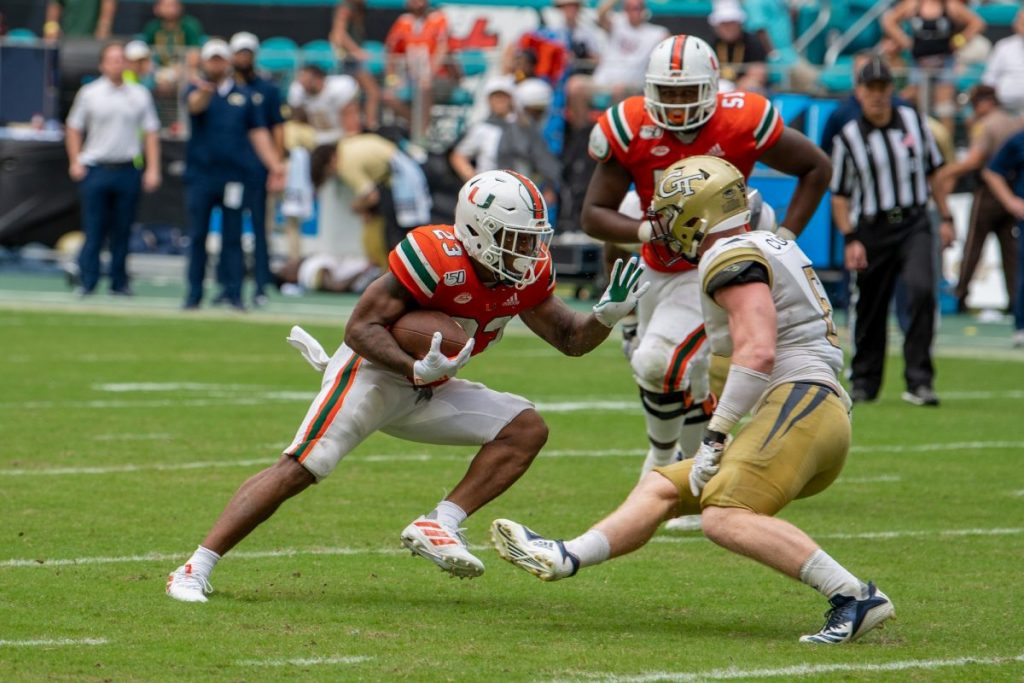 On the offensive side, running back DeeJay Dallas suffered a knee injury in the second offensive drive of the game. The junior was sidelined for the remainder of the game after being taken to the locker for further evaluation. Cam’Ron Harris took over at the running back position.

Another key injury came after the second scrimmage play of the second half when N’Kosi Perry was shaken up after a nine-yard scramble. Jarren Williams stepped in relief for the remainder of the drive, completing a pass over three attempts for 12 yards, but Perry would return for the following position. Perry completed 16 of his 28 passes for 188 yards and two touchdowns.

To make matters worse for Miami, senior linebacker Michael Pinckney also went to the locker room with an injury. With Zach McCloud redshirting, walk-on Ryan Ragone was relied upon. Cornerback Trajan Bandy was also injured in the third quarter.

Diaz says nothing will be known about the severity of the injuries until Sunday. On top of everything else, receiver Jeff Thomas missed the game due to a violation of team rules.

Miami’s biggest play of the game came with 8:46 left in the final quarter when Quarterman stripped a Georgia Tech running back at the Canes’ 23- yard line. Harris broke free for 42 yards on the ensuing play, and Perry hit Mike Harley for 17 yards a play later. However, the drive stalled and kicker Bubba Baxa missed his only field goal opportunity he had. 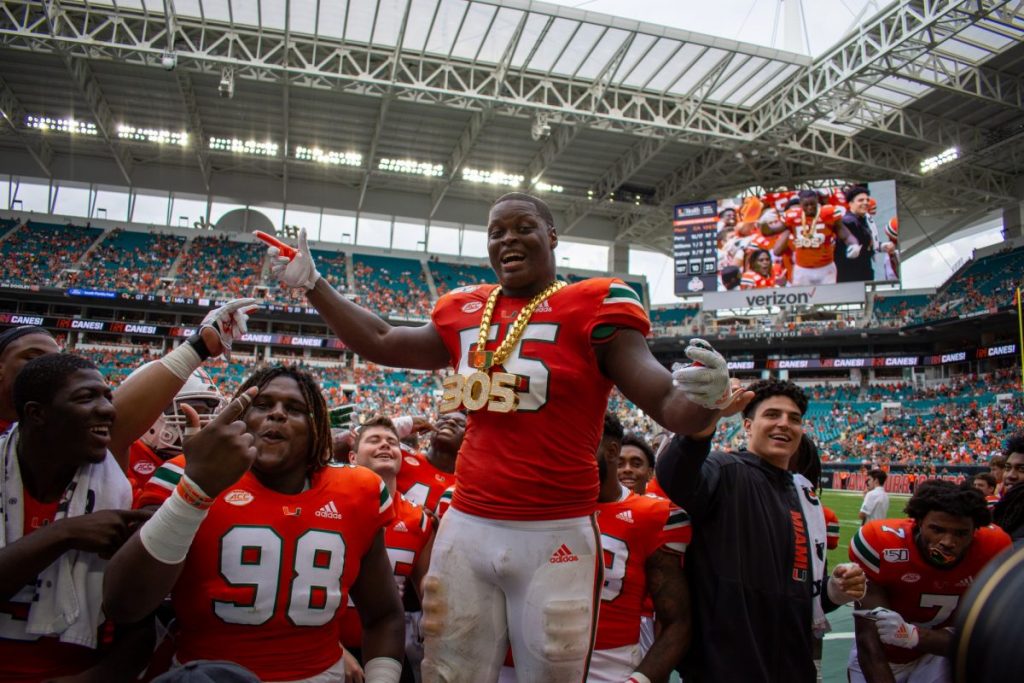 Baxa was once again limited to kickoffs for most of the game, as Turner Davison handled extra points and field goals until the fourth quarter. But Davidson missed two kicks from 34 yards and 25 yards and kept the door open for a Jacket upset.

“We are playing with very little margin for error in close games,” said Diaz. “I think that’s what obvious tonight…We drove the ball inside their 30-yard line four times and came away with no points. That is the margin for error.”

If the kickers are the margin for error, Diaz was dismissive.

“They [the kickers] are who we have, we do not have free agency,” Diaz said. We’ll just continue to press on.”

It was just one domino to fall on a frustrating afternoon for Miami.

The Jackets’ JaQuon Griffin forced Perry to fumble on the Canes’ opening drive and recovered the ball in the end zone for a Georgia Tech touchdown. Miami responded with an 11-play, 64-yard drive capped with a one-yard sneak by Perry.

A pair of big plays by Osborn would put the Hurricanes in the lead just over two minutes later, returning Georgia Tech’s punt 52 yards to the 13-yard line, and catching a pass in the corner of the end zone one snap later.

The Yellow Jackets tied the game at 14 on the fake as punter Pressley Harvin hit Nathan Cottrell for a 41-yard touchdown.

Miami would find the end zone again early in the second quarter off a 19-yard screen pass from Perry to Harris. But Georgia Tech tied the game 21-21 again before the half behind a six-play, 80-yard drive capped off by a touchdown pass from Graham to Brown. The tied score held until overtime

Postgame, Diaz stressed the importance of sticking together.

“You’ve got to band together,” Diaz said. “If you aren’t getting the results you want you can’t bang your head on the same wall. There are only two options, they are to either press on or surrender.”

Miami returns to action Oct. 26 at 12 p.m. when they travel to Heinz Field to face the Pittsburgh Panthers.