After a dominating first set that saw the Eagles record a .500 hitting percentage while also holding Miami to a 0.83 percentage, the momentum seemed to have flipped in favor of the Canes. 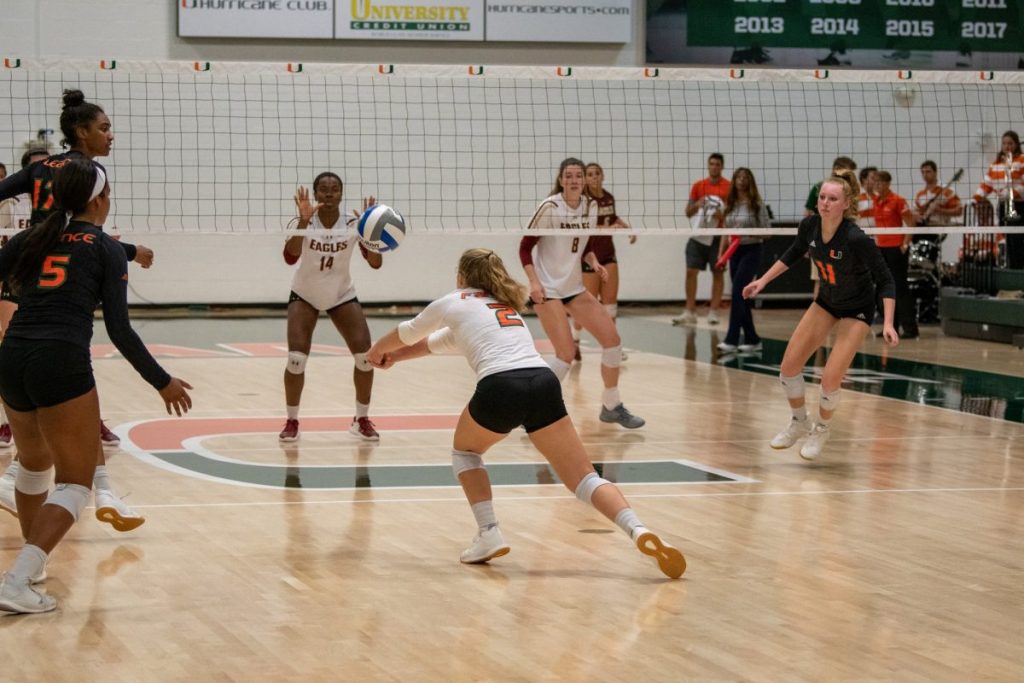 Amanda Flack (2) dives for the ball during a match against the Boston College Eagles Oct. 20. Photo credit: Jared Lennon

Miami won the next two sets (25-19, 25-23), increasing their hitting percentage in each set. Miami also held a 23-19 lead in the fourth set and was two points away from sealing their second consecutive win at home over an ACC opponent, but the Eagles showed experience and maturity, using a four point run to come back and steal the set. The Eagles used that momentum to jump to an early 6-2 lead in the fifth set. Miami would cut the lead to two, but Boston College expertise showed again as they scored six of the next seven points to win the fifth and final set.

“If you look at their roster, they’re old players, more experienced players, and more mature players, they came in fired up and ready to play,” head coach Jose “Keno” Gandara said after the loss. “They got us on our heels a little bit. We had to gather up and we were able to do that for most of the game, but ultimately it came down to a couple of plays but that momentum, that aggressiveness and maturely took over the fifth set.”

Miami finished the match with 56 kills, 56 assists, 57 digs and a .183 hitting percentage. Miami freshman Savannah Vach led the team with 51 assists. Redshirt junior Elizaveta Lukianova led Miami with a career-high 24 kills and a .333 hitting percentage. Lukianova believes the team followed the game plan, but a lack of focus might have cost them the game.

“I just feel like it’s all us. I think it happens with the team a lot when we think that we got this but we still need a couple more points,” Lukianova said. “We start to think that we already won, so I think that didn’t help us a lot, so we kind of just slowed down and lost focus.”

The Canes only have 10 games left in the regular season before the postseason starts, but head coach Gandara said he isn’t looking that far ahead yet, especially with such a young team.

“For us it’s one game at a time. We have to just try to get a little better this week for next week and we can’t get too far ahead,” Gandara said. “There is a lot of work ahead with such a young team that we have to just keep growing from here, from Friday to Sunday and now for the next Friday game, so we just have to take it one day at a time, one practice at a time.”

Miami will have five days off before they travel to South Carolina to take on the Clemson Tigers Oct. 25.

Miami falls to 3-4 after loss to Georgia Tech
Why is there so much hate surrounding Kanye West’s Sunday services?