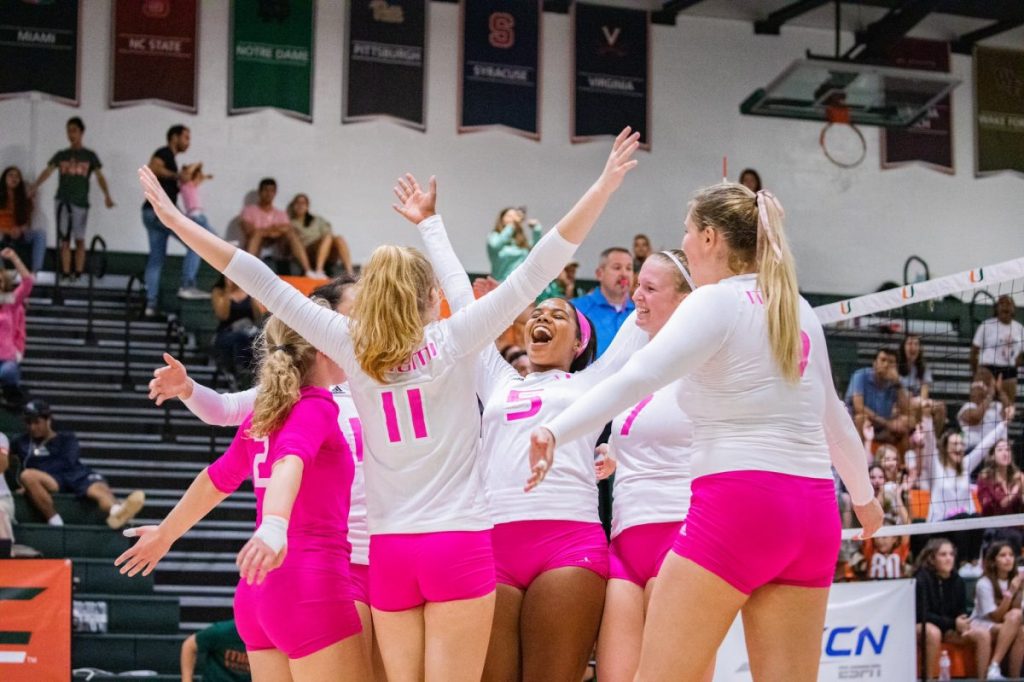 The Canes were aggressive on all fronts, scoring 59 total points off kills and recording a season-best .328 attack percentage. After a rocky opening set, UM fired on all cylinders to get back in the win column after two straight losses with the help of a combined effort from five new players.

“They’re all huge,” said coach Jose ‘Keno’ Gandara after the victory. “For us, every opponent is a difficult one.”

Junior Janet Kalaniuvalu led Miami with 17 kills, her ninth match this season with at least 10 kills. Equally important were the outside hitter’s three aces, often coming in big moments. Her .405 attack percentage was also a season-high for the Southern Utah transfer.

Freshman Kennedy Prince was also heavily involved, recording 16 kills. The Sugar Land, Texas native has registered double-digit kills in all but two matches this season, and like Kalaniuvalu, had her best hit percentage of the season, at .314.

Defensively, freshman Amanda Falck continued her impressive season, quietly recording a team-high 10 digs in her sixth match in a row with 10 or more.

Fellow freshman Savannah Vach had a game high 47 assists, accounting for over 80% of Miami’s overall assists. The Winter Springs, Florida native has led the Canes in the statistic each match in 2019. And first-year middle blocker Janice Leao also had a breakout match Friday, with a career-high 12 kills.

Gandara lauded the efforts of his freshman class.

“We knew them well from the recruiting process, they’ve bought in and they have had opportunities to contribute,” Gandara said. “They are all stepping up. It’s been a work in progress. They’ve been out there most of the season, [but] they keep growing really fast in competition, which is a lot to ask from freshmen.”

“The freshmen have played a huge part in what we’ve gotten to do this season,” said Kalaniuvalu. “They have all matured a lot and made a lot of changes. It’s hard as a freshman to do what your coaches want you to do, but they have all done really well with that.”

The first set wasn’t the smoothest for the Hurricanes, who commited nine total errors, including three on serve and six white attacking. Madison Dill recorded four kills in the opening set, and a service run of four consecutive points off the arm of Kalaniuvalu’s powerful jump serve would shift momentum as Miami took a 15-13 lead. The Orange answered with a 6-0 run to take a 19-15 lead that they wouldn’t relinquish, and Syracuse’s .345 attack percentage overshadowed UM’s .171 in the opening set.

“We were mature enough to come back [after the first set] and put it aside,” Kalaniuvalu said. “Coach [Gandara] said that we just needed to clean up on the little things. By cleaning those up, we were able to do better.”

The Orange would take the first three points of the second set and jumped out to an 8-5 lead. But Prince spearheaded a response with three kills over a 5-0 run as Miami took their first lead of the second set, part of an 20-4 extended run for the Canes that leveled the match going into the break, finished in style with a pair of Kalaniuvalu aces. A more aggressive Miami team helped turn the tide, attempting 27 attacks and recording 14 kills with just two errors, good for a second set hit percentage of .333.

There were two key moments that were decisive in the third set. First, Prince’s behind-the-back spike from halfway back to the baseline tied the third set at 21 and got the home crowd involved. Then a Syracuse point was overturned, ruled by instant replay to have gone long. The Orange did fight off six set points, but not a seventh, and Miami went up 2 sets to 1. The Hurricanes rode their third set triumph into the fourth and closed out the match with little extra drama, winning 10 of the set’s 14 first points.

With the win, Miami will take Saturday off to prepare for Sunday’s game against Boston College. UM, currently tied for sixth in the ACC, hopes to move farther up the league standings before the weekend is finished.