Due to a crowded field of 19 candidates vying for the 2020 Democratic presidential nomination, many UM students reported feeling unsure of which candidate they support and that more time and information is necessary in order to make a decision before the Florida Democratic primary in March.

Student Government Vice President Millie Chokshi stated that she is “still trying to get a general feel of who [she] would like to support by watching the debates and reading articles.” Since many of the candidates’ viewpoints overlap, Choskhi, a senior majoring in public health and Spanish, said that she is “hoping to get more clarity as the timeline and debates move forward.”

Likewise, John Corde, a junior majoring in sports administration, said he still isn’t sure which candidate he prefers over others.

“None of them stand out enough for me to choose any specific candidate at the moment,” Corde said. He believes his opinion “will change as we get closer to the Iowa Caucus.”

Carina Landgraf, a freshman studying political science, history, and international studies, agreed that it is difficult to differentiate between the candidates.

“At the moment, I do not support any one candidate more than the other. It seems as if many have overlapping policies, and others have yet to either expand upon, or specify their stance on certain issues,” Landgraf said.

The latest Democratic Debate, hosted in Westerville Ohio on Tuesday, Oct. 15, was marked by attacks against Elizabeth Warren, Pete Buttigieg sparring with other candidates, and, overall, fighting amongst the top 12 candidates on stage. After seeing this, students responded with feelings of dissatisfaction and division within the party. 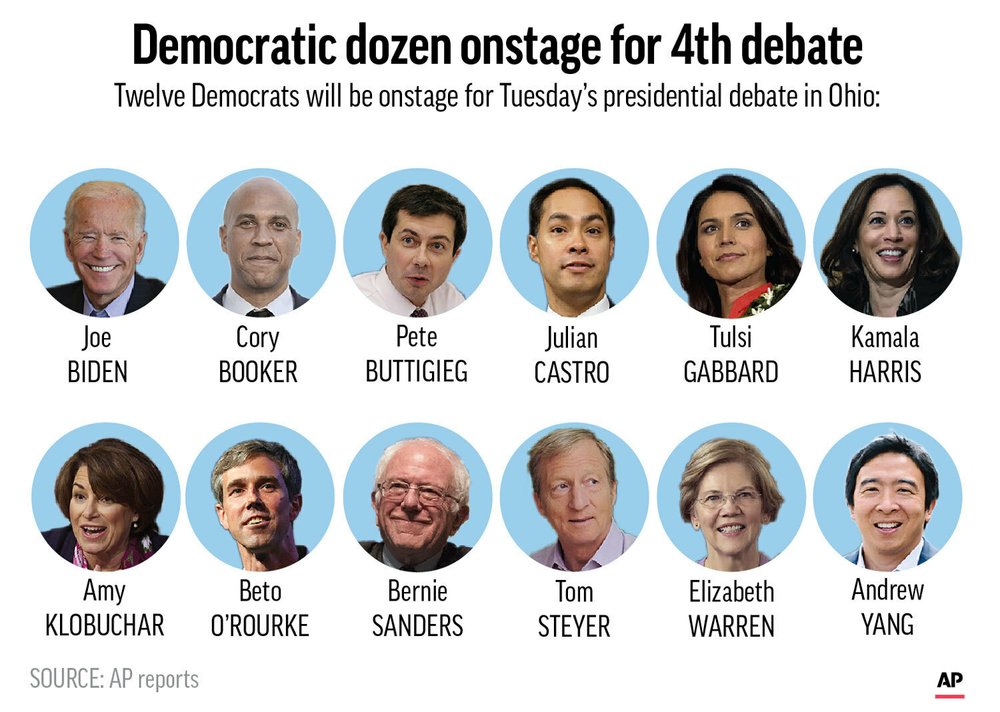 Out of the 19 Democratic candidates still in the race, only 12 met the qualifications for Tuesday's debate this past week: 130,000 unique donors and 2 percent in four national polls. Photo credit: Associated Press

“There are far too many candidates on stage, and each are only given enough time to give a memorized spiel about President Trump, or to take a whack at one of the other candidates,” Corde said. “When I watch the debates, I’m expecting to be able to understand what all of their positions are, but I feel like that just hasn’t happened yet.”