Starting in the Fall of 2020, the University of Miami will meet 100 percent of demonstrated financial need for all undergraduate admitted Florida residents, the Office of Undergraduate Admission announced Oct. 4.

Jay Jacobs, director of enrollment and admission operations, and Christopher Magnan, senior advisor in the Office of Student Financial Assistance and Employment, answered questions via Facebook Livestream last Wednesday regarding the new policy.

The new policy will not benefit currently enrolled UM students. Aid will begin with next fall’s incoming class, including freshman and transfer students.

“There are a lot of students that we are meeting either 100 percent of their need or a lot of their need already,” Magnan said after an audible sigh from the student interviewer. “We are pretty generous as it relates to need-based aid.”

This is disappointing for some current Florida resident students, including Lauren Locke.

Locke, a sophomore majoring in psychology and political science, said she believes it is unfair that current UM students are not included in the new policy. She is from Miami and commutes to classes from home. Locke chose not to live on campus because she knew she would miss her family, wanted her own bedroom and felt the price of living on campus wasn’t worth it.

“Having need doesn’t change just because I already go here,” Locke said. “I think my financial needs should be met by the university I already attend and am loyal to.”

Locke said she knows many students who did not consider UM an option because of its cost.

“When I say I go to UM people reply, ‘Oh I thought about applying there, but I didn’t even bother because of how expensive it is,’” Locke said. “I have friends that go to FIU because they didn’t want to move away [from Miami] but UM was too expensive.”

Locke said she wonders where those friends would have gone to school if this policy was in place when they applied to colleges in 2018.

According to the university staff, the new financial policy won’t affect an applicant’s chances of acceptance.

“It does not increase the competitiveness whatsoever,” Jacobs said. All of our admission decisions for domestic students are need-blind.”

To be considered for Florida state aid, a student must have been a Florida resident at least 12 months prior to attending UM, according to Jacobs and Magnan.

The new policy means that UM will close this gap for every Florida resident, Florida aid eligible student, and early decision student.

“Whatever is left over is what we try to meet with grant money from the university,” said Magnan. 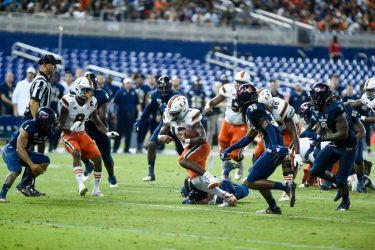