After Friday’s game, Miami receiver KJ Osborn admitted he didn’t even realize Turner Davidson had taken over Miami’s kicking duties in the team’s 17-9 win over Virginia.

“We were in the locker room, and coach Diaz says ‘special teams’ and they yelled out Turner,” Osborn said. “I looked around and said, ‘What did Turner do?’ and they were like, ‘He was kicking field goals.’ And I was like, ‘Oh, I didn’t even know.’ He did a good job.” 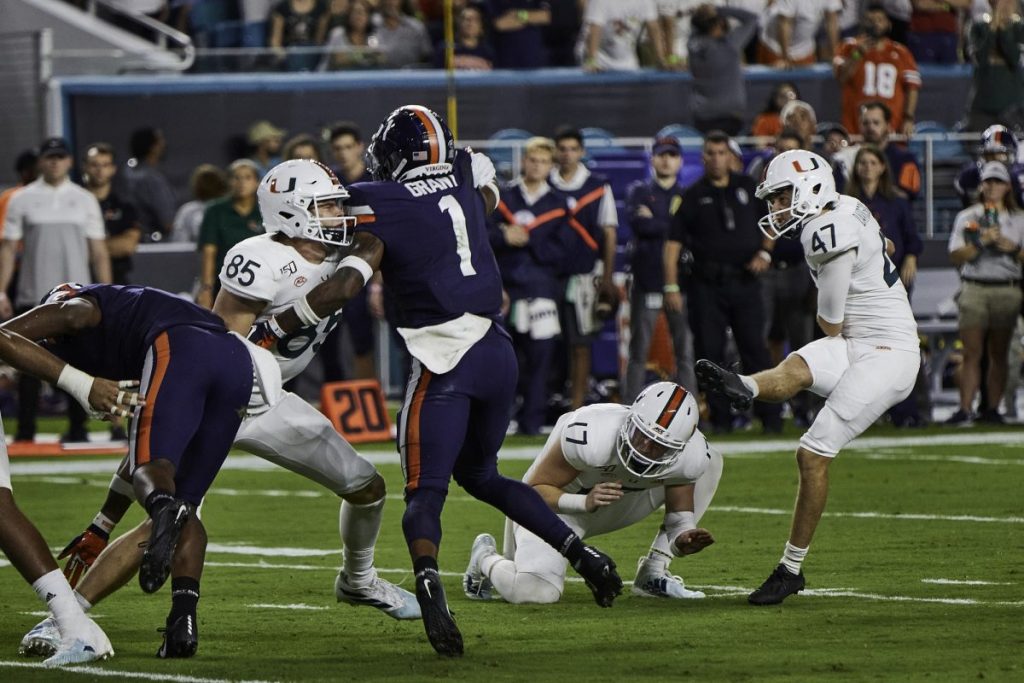 “He’s been with us for a little while now and has been getting better and better,” head coach Manny Diaz said. “He kind of caught everybody’s eyes because, when we do ones and twos on field goal, he was knocking them through.”

Davidson made both extra points and a 19-yard field goal in the fourth quarter that increased Miami’s lead to 10-6.

“I always liked to think to myself I was going to become the starter one day, but I was taking it day by day,” Davidson said after the game. “[I was] saying, ‘Alright, I’m going to kick the best I can today and move on to tomorrow.’”

Despite finding out that he would be the starting kicker so close to game time, Davidson didn’t seem to be fazed by the pressure.

“Just a normal kick, nothing different than what we always do,” Davidson said on his mindset for the first extra point. “I’ve hit a million extra points in the past, it’s just the same thing.”

The decision to have Davidson kick field goals and extra points instead of Bubba Baxa, who has kicked in all five games prior to Friday, was a choice that Diaz made during warm-ups.

“We let it kind of go down to warm-ups, and [Davidson] just had a better warm-up than Bubba,” Diaz said. “We just felt like from a pure, evaluating who was making the kicks, that he was the guy.”

Baxa has struggled tremendously this year, going five of nine on field goals and 15 of 17 on extra points in the first five games. Three of the missed field goals were from less than 30 yards. Baxa’s missed extra point last week against Virginia Tech would have given Miami the lead. Redshirt freshman Camden Price is listed as the back-up kicker behind Baxa. Price, however, was listed as “unavailable” on Monday by Diaz.