After weeks of struggling, the Miami Hurricanes (3-3, 1-2) finally look like a team that can win games.

Head coach Manny Diaz credits the fight his players showed as a key factor in the 17-9 win over Virginia (4-2, 2-1) Friday night at Hard Rock Stadium.

“We talked about being persistent,” Diaz said. “The execution is going to get better but as long as the intangibles are there, as long as the fight and the attitude of never giving up and all that type of stuff, you can win with that and that’s what we did tonight.”

“For him to do that, that just shows you don’t always get what you want, but for him to battle like that I think its a great example for everyone in the football team,” Diaz said of Perry.

Miami got on the board in the first quarter, scoring on a 17-yard touchdown pass from Perry to DeeJay Dallas, who recorded his first receiving touchdown of his career. 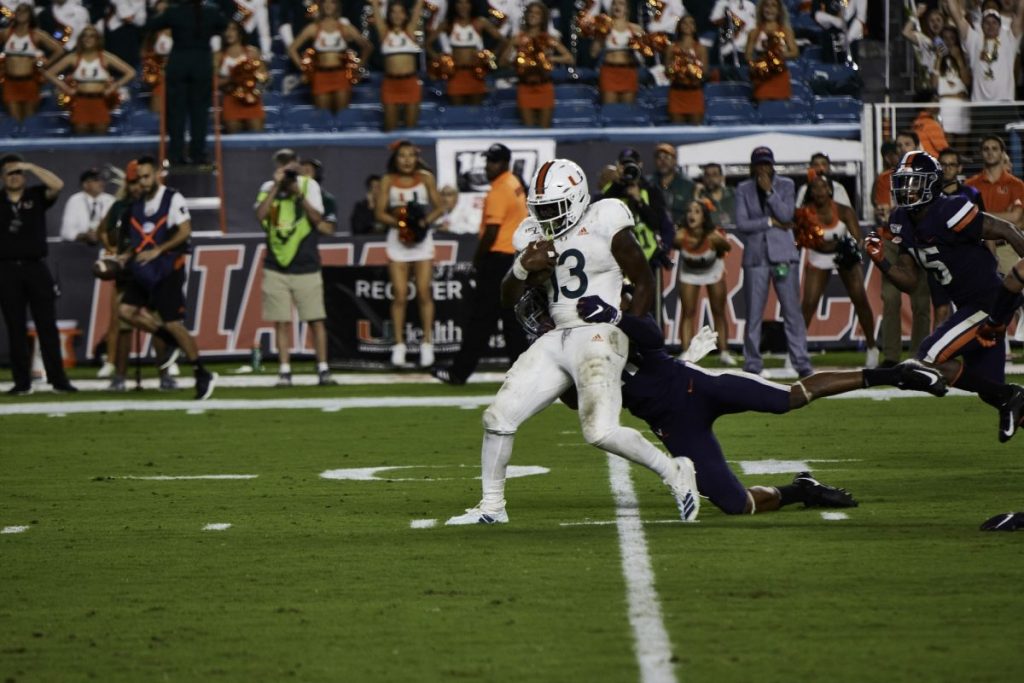 After their opening touchdown drive, Miami’s offense was forced to punt on six consecutive drives, until they got close enough to kick a field goal early in the fourth quarter.

Turner Davidson, a redshirt sophomore who had never played in a game for Miami before Friday, was called upon to take over kicking duties in the game after Bubba Baxa’s season-long struggles continue. Davidson made his first collegiate field goal of his career with ten minutes remaining in the fourth quarter to put the Canes up 10-6.

Virginia, who’s only points were off field goals, made their third field goal of the game shortly after to close the gap and make the score 10-9. 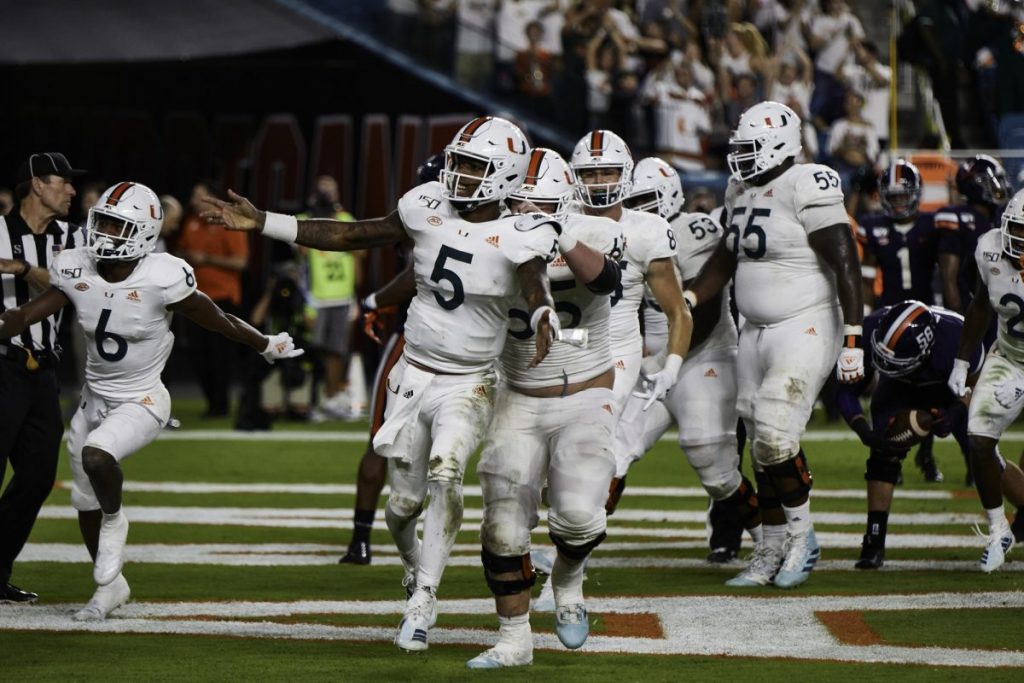 “I saw a hole after my first read wasn’t there and took advantage of it,” Perry said on the touchdown. “When we got that touchdown and went up by eight points, I knew we were going to win the game.”

Not only did Miami’s offense look better, but a vastly improved defense showed up.

“We trusted each other more and I feel like this was our best defensive game, for sure,” said defensive lineman Greg Rousseau.

Striker Romeo Finley had eight total tackles, two solo, while Rousseau, who got his first start of the season, finished with seven total tackles, one sack and two tackles for losses.

The Canes sacked Virginia quarterback Bryce Perkins five times, and while at times the coverage in the defensive secondary looked spotty, Miami made stops when it mattered most.

“Defensively, the toughness of your defense is defined by how you play in the red zone,” Diaz said. “When they got down there close, and to not let them score a touchdown with all the snaps they had inside the 14-yard line is simply a mindset. I was very, very proud of the way that they responded.”

In the third quarter, Trajan Bandy recovered a fumble forced by Johnathon Ford and brought out the turnover chain for the first time in two weeks.

In the much needed ACC win, Miami remains in contention for the ACC Coastal championship. Next week, Miami is set to face Georgia Tech on Saturday at Hard Rock Stadium.