In last week’s comeback that fell short, the Canes had to dig themselves out of a hole early, as quarterback Jarren Williams started the game with three straight interceptions. Williams was replaced by redshirt sophomore N’Kosi Perry, who put up big numbers but did not have an inspiring performance. 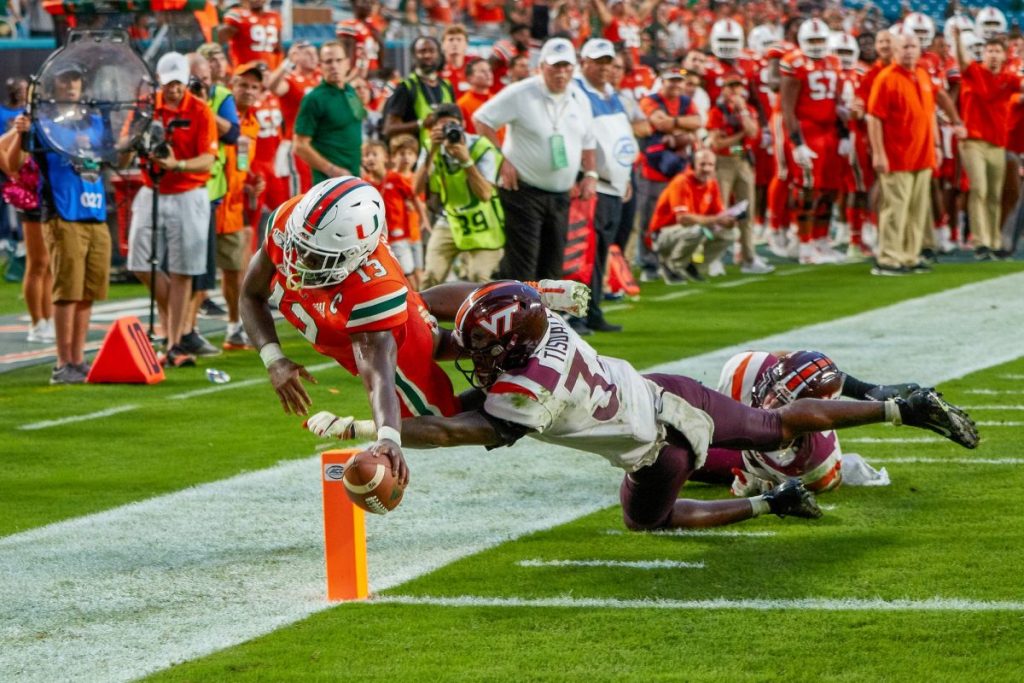 DeeJay Dallas (13) dives into the end zone in last week's 42-35 loss to Virginia Tech. Miami looks to even their record with a win against Virginia. Photo credit: Josh Halper

After a few days of speculation about who would be the starting quarterback against Virginia, head coach Manny Diaz named Perry the starter after practice on Wednesday.

“I think we all saw the improvement in N’Kosi’s game last Saturday,” Diaz said. “I actually think it’s kind of cool that N’Kosi gets to start against Virginia because that was the game last year where it kind of went backwards on him.”

Diaz is referring to last year’s matchup against Virginia, where Miami entered the game ranked 16th in the country and lost 16-13, setting off a four-game losing streak that essentially ended Miami’s season.

Perry, who started that game, was pulled and replaced by former UM quarterback Malik Rosier after completing 3 of 6 passes for 20 yards and throwing two interceptions.

This year, between Perry and Wiliams, Miami is averaging 315 passing yards per game, 11th in the country. Virginia, on the other hand, has the 20th ranked passing defense this season, holding opposing offenses to 184 yards through the air per game, so it is crucial that Perry throws accurate passes.

Virginia’s defense has effectively blitzed a lot this season and is averaging 4.8 sacks against opposing quarterbacks. This will be an interesting matchup with Miami’s young and inexperienced offensive line, who have continued to struggle, allowing an average of five sacks per game.

Diaz has remained adamant that his offensive line is improving, despite the fact that Perry was sacked five times in the three quarters he played last game.

Defensively, Miami cannot afford to give up big plays like they did against Virginia Tech. Similar to last week, Virginia’s quarterback is not the best passer, but is athletic and can use his ability to run. It will also be interesting to see if there are any changes defensively now that Diaz will be more involved with the defense.

The Canes are favored in the matchup, which is quite surprising, as Miami comes into the game with a losing record and Virginia has looked good this season, minus a loss to Notre Dame two weeks ago. Miami will need to have a strong performance if the team wants any chance of securing a much needed ACC Coastal.

The Miami Hurricanes will face the Virginia Cavaliers on Oct. 11 at 8 p.m. at Hard Rock Stadium. The game will be televised on ESPN.