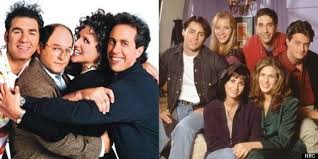 “Seinfeld,” one of America’s most iconic TV shows, is in the middle of a streaming service tug-of-war. Hulu recently lost the rights to the famous sitcom, while at the same time, Netflix lost two of the most relevant shows in its catalog– “The Office” and “Friends.” Last year, Netflix users collectively streamed more than 80 billion minutes of “Friends” and “The Office.” So, in an effort to make up for this loss, Netflix acquired “Seinfeld” as a replacement.

All three of these shows sold for around a half billion dollars each, but that is not what I am worried about. Instead, I am about talking relevance. I suspect a quick survey around campus– or a nation-wide survey for that matter– would find that almost every phone-swiping, binge-watching millennial or gen-zer has spent a little more than a whole month of life watching these shows. But, can “Seinfeld” really replace two shows that people everywhere, regardless of age, still watch?

Well, the show, apparently for people with “refined taste in comedy,” wasn’t even in Hulu’s top ten most watched shows. But I blame that on Hulu. Seinfeld was the most watched show in the 90s. A show about “nothing” in which a group of friends get themselves into the most absurd problems, set in a New York City apartment. That sounds just like “Friends.”

The “Seinfeld” verses “Friends” argument is an important one. It has torn up friendships, marriages and who knows what else. Having watched both, I can assure this is a real “apples to oranges” problem. It would be like picking one of your parents over the other or deciding between New York or Los Angeles.

Some say “Friends” has the better story acts and others say “Seinfeld” has the more intricate plotlines.

“Friends makes one feel fuzzy and warms,” said Maria Castillo, who is a sophomore in the Frost School of Music.

However, a quick browse through Twitter would lead you to some very hardcore Seinfeld fans who heavily disagree. Most likely, Bushwick-dwellers.

Either way, with a larger exposure to our generation, my bet is that in a few years, a lot of Seinfeld t-shirts will adorn the torsos of staff and student alike, on campuses across the U.S. We will all be pressured by that one friend, who– a few years ago– had asked us, “Hey, have you seen ‘The Office’ yet?”

After months of zoning out their blabber, we gave in a moment of weakness after a long night out. And none of us, regretted that day. And we won’t regret this one.