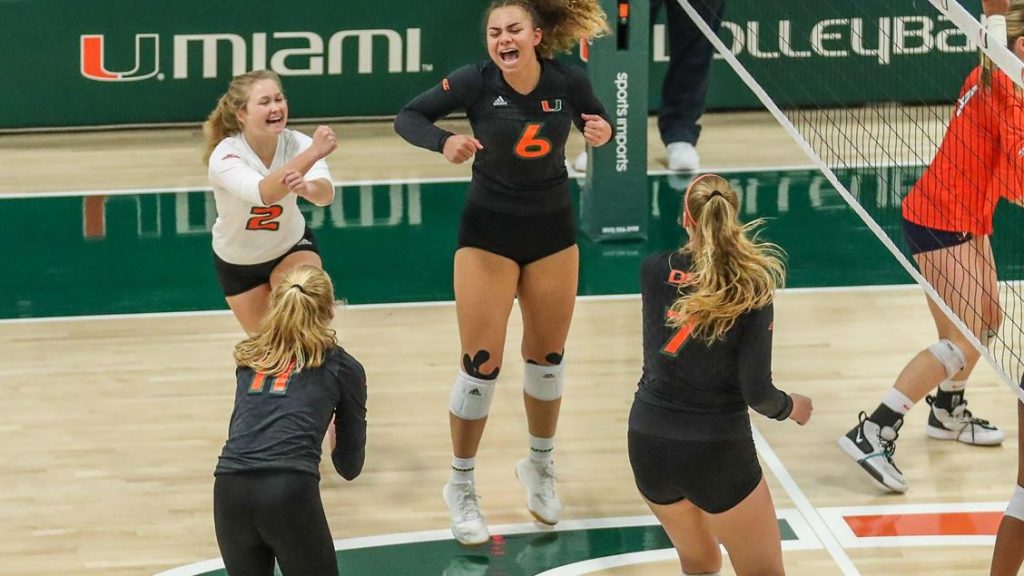 For the first time in nearly a month, the Hurricanes were at home in front of their fans at the Knight Complex, where UM hosted their conference home opener on Friday against the nationally fourth ranked Pittsburgh Panthers. While UM was able to play Pitt tough in all three sets, the Canes fell in 3-0 fashion (26-24, 25-23, 25-17). Redshirt junior Elizaveta Lukianova recorded a career-high .611 hitting percentage to supplement a game-high 13 kills. Miami saved the first three set points of the second set, but ultimately failing to win the fourth point needed to extend the set. Freshman Savannah Vach had a game-high 34 assists and fellow newcomer Amanda Falck had 11 digs, also a game-high, as Miami held the Panthers to their lowest attack percentage in ACC play, hitting just .280.

The Canes (7-5, 3-1 ACC) have now won five of their last six overall and take their momentum on the road, where they’ll play at North Carolina on Oct. 11 and at NC State on Oct. 13.

Two Hurricanes got off to a head start at the ITA All-American Championships in Tulsa, Oklahoma. Senior Yuna Ito defeated Houston’s Mimi Kendall-Woseley, 3-6, 6-4, 6-1 Saturday in the first round of the pre-qualifying draw that was interrupted by weather. Her teammate, sophomore Lucia Marzal was also victorious, winning 6-3, 6-3 over Katarina Kopcalic of Washington. The players were back Sunday for the second round, with Ito falling to Alexandra Mikhailuk of Mississippi State, 0-6, 0-6. Marzel meanwhile fell in three sets, 4-6, 3-6, 1-6.

In the main qualifying round, sophomore Daevenia Achong would fall Monday, 6-3, 6-3 to Princeton’s Daria Frayman. Achong teamed up with defending singles national champion Estela Perez-Somarriba in the first round of the doubles qualification round

Perez-Somarriba’s spot in the singles main draw is already assured, where she will play her first match of the tournament on October 9. The competition runs through October 13. After finishing in Tulsa, the team splits up again for ITF tournaments in Florence, SC, and Austin, TX.

In Monday’s first qualifying round, junior Bojan Jankulovskifell in a three-set dogfight to South Alabama’s Loic Cloes, 1-6, 6-3, 6-2. Like Jankulovski, sophomore Francisco Bastias got his match started on the right foot by winning the first set, but ran out of gas late and lost 4-6, 6-1, 6-0 to Jake Sands of USC.

Junior Adria Soriano Barrera has received automatic entry for a main draw, October 9 match. Like the Women’s tournament, the Men’s side will also be completed on October 13. After the All-American Championships, the Men’s squad splits up to go to the Bedford Cup at Florida State from October 11-13, and the Georgia Tech Invitational over the same weekend.