After years of traffic problems and public complaints, changes to Miami-Dade County’s public transportation system promised years ago have yet to materialize. With round-the-clock traffic jams that leave cars stagnant on US-1 for hours on end, residents are fed up.

In 2002, Miami-Dade County launched the People’s Transportation Plan, promising a whopping 22-mile expansion of the currently 25-mile metro train system in exchange for a half-percent sales tax dedicated to transit and road projects.

“In the early 2000s they would’ve expanded the lines, but years of mismanagement by Miami-Dade transit and the city government led to using that money to make up for deficits and pay off loans,” said Brandon Martin, a senior studying mechanical engineering. “People are waiting for expansion, and it has not come.”

After 17 years, the county has only added three miles of track to expand the Metrorail to Miami International Airport. In 2016, the city of Miami-Dade launched the Strategic Miami Area Rapid Transit Plan, or “SMART Plan,” to fund studies that could determine the best transit options for the city.

Research conducted under the SMART plan and state consultant WSP concluded that the Metrorail should be expanded with a 9.5-mile line that would expand north up to Aventura. It is estimated to cost about $1.9 billion and attract 22,000 new riders; however, according to projections by the journal “Railway Track & Structures,” a minimum of 40,000 passengers will be required to meet the costs of the project.

As per the People’s Transportation Plan, Miami-Dade County will collaborate with Transit Alliance Miami, a non-profit that advocates for walkable streets, bikeable neighborhoods and better public transit. With the help of the organization, the current bus route will be redesigned, and mayoral candidate Monique Barley said she wants to see this initiative expand to the metro.

“I want to make the commute better for those who choose to take public transportation,” said Barley, who plans on expanding the city’s bus and metro lines so residents of Miami-Dade can rely on public transit to reach even more parts of the city. “It’s necessary to meet the needs of our constituents. We need better timing and more frequent trains.”

Barley is seeking inspiration from other cities for Miami’s new transit plans.

“I’m looking towards the Vancouver, Canada model and [hope to] implement it in Miami-Dade county,” she said. When comparing public transportation offered in Miami and Vancouver, the difference in accessibility to parts of each city is stark. 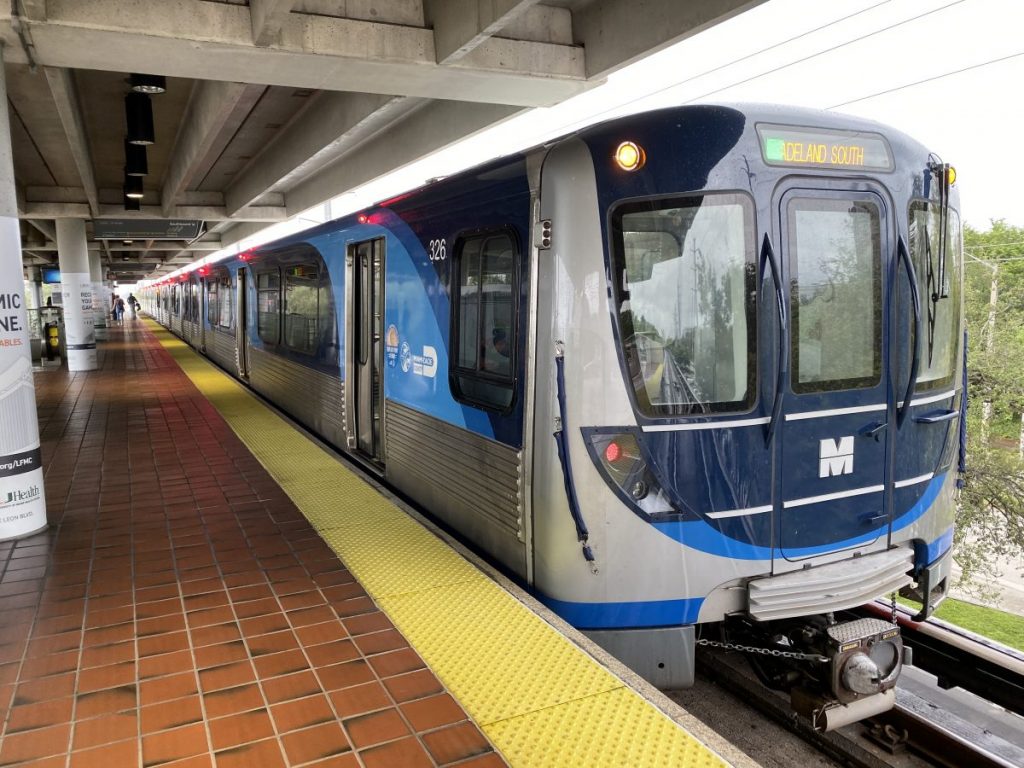 Miami-Dade's new metrorail trains, as seen above, were put into service in 2017 as part of the People’s Transportation Plan. However, much of this plan, which promises much-needed changes to the city's public transportation system, have yet to be implemented. Photo credit: Jared Lennon

If Miami implements the Vancouver model, Barley said she can “guarantee we’ll have a better system.”

For $2.25 a trip, public transport in Miami is a less expensive alternative to owning a car or using ride-share apps. For many students, it’s the primary method of transportation.

“I mainly use trains to get around,” Martin said. “I’ve seen what a good public transportation system can do for the area that surrounds it. The metro in Washington D.C. was built in the 1960s, but continues to serve the people today.”

Martin aspires to work for a transit agency, and hopefully, one day become the secretary of the U.S. Department of Transportation and improve transit across the United States. He said he’s passionate about public transportation because “it benefits individuals from all walks of life.”

In Washington D.C., the Kids Ride Free program guarantees free transportation for students, and the U-Pass offers a discounted rate of one dollar a day for college students. For UM students, MetroRail monthly passes are half-off, and readily available for purchase through the EasyPass app; however, each monthly pass costs $56–– a hefty price in comparison to other cities where students ride for free.

Patrick Farrell on photojournalism, his career, how to make it in the industry
The struggles of a low-income student at a private institution