A hub for students and faculty members alike, the Rathskeller is now one of the most eco-friendly dining options on campus.

Prompted by sophomore Sofia Mesa and senior Talula Thibault, both members of the Student Government’s Energy and Conservation Organization agency, the Rat took large steps to reduce its environmental footprint in the last year. The restaurant has moved away from single-use plastic and made its menu more vegan-friendly, adding the popular meatless Beyond Burger. 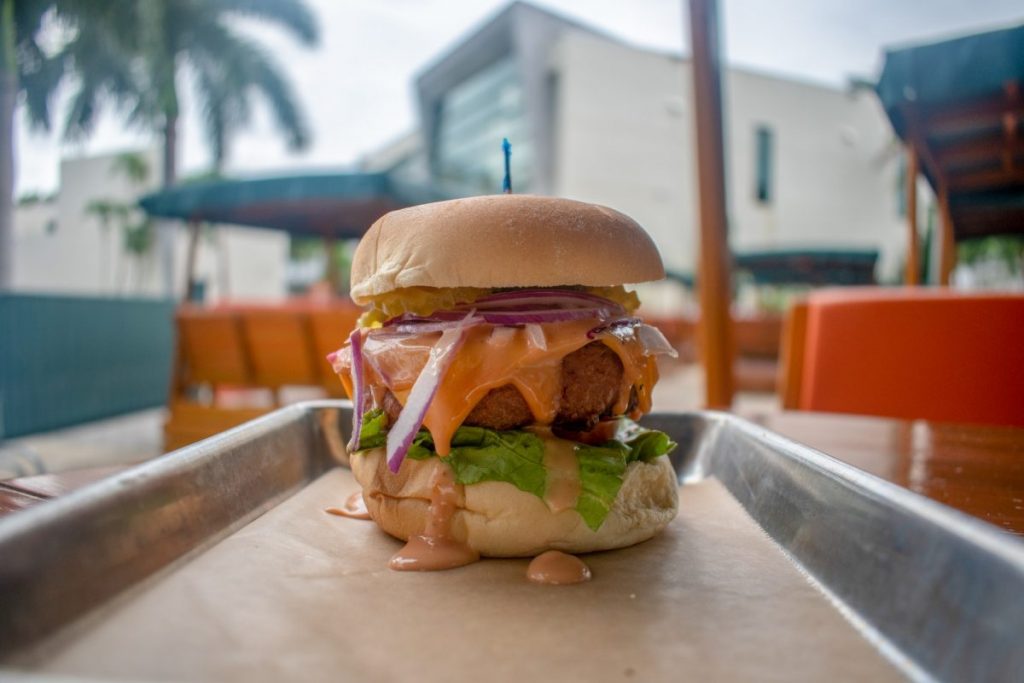 Expanding its vegan-friendly options, the Rat now serves the Beyond Burger for $9.99. Photo credit: Jared Lennon

During Mesa’s freshman year, she noticed an issue with the Rat’s single-use plastic consumption. As a member of the green committee, a strand of ECO agency, Mesa, an English and ecosystem science and policy double major, decided to take the Rat on as her project. She joined forces with Thibault, now the chair of ECO agency, to try to make the Rat as sustainable as possible.

“The Rat is always a booming, bustling place and along with this great influence it has on customers comes great responsibility,” said Thibault, a geography and ecosystem science and policy double major. Thibault said she wanted to focus on the Rat because its integral role on campus means it should “display environmental stewardship to those who go there.”

After planning and consulting with Mesa and Thibault, the Rat ditched plastic straws and traded single-use plastic utensils for reusable utensils. 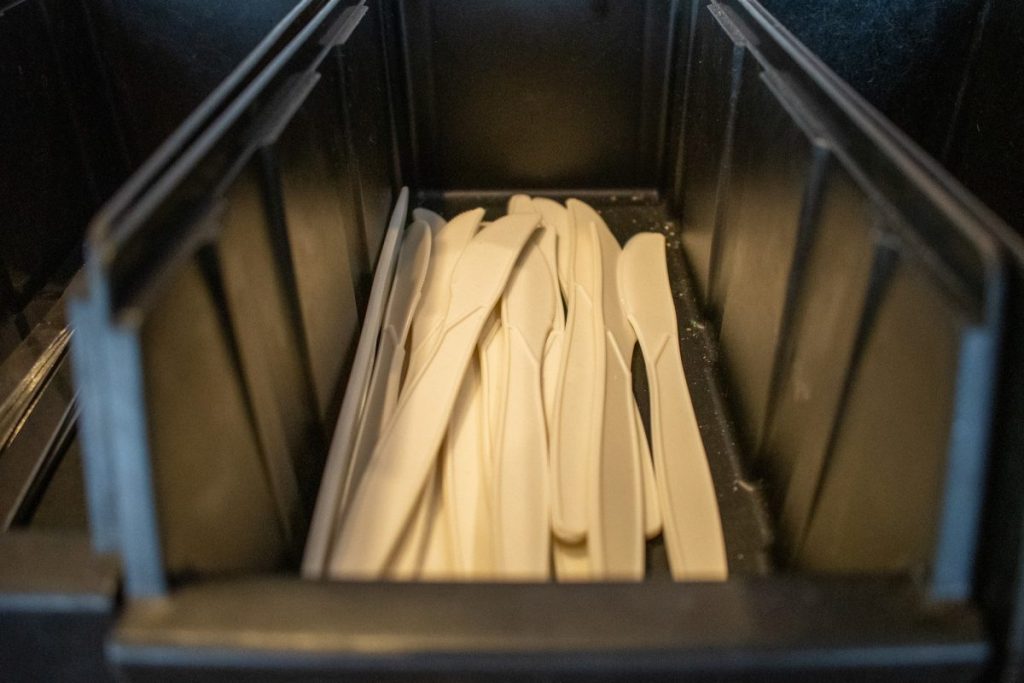 Utensils made from cornstarch are available for all dine-in guests at the Rat. Photo credit: Jared Lennon

“They were in the transition of moving away from plastic straws,” Mesa said. “They were only by request at the time I believe. But then we also got them to remove plastic straws.”

Several other local Coral Gables businesses stopped using plastic straws in the past few years as part of the city government’s “Skip the Straw” campaign.

But the Rat’s biggest recent change is the introduction of marine-degradable containers for takeout orders. Lean Orb, a local company with multiple UM alumni on its core staff, produces these eco-friendly containers out of plant-based alternatives. Rather than sitting in a landfill, the containers can be composted in a backyard composting system, and if they end up in the ocean, they will degrade much faster than plastic or styrofoam.

Since its founding in 2017, Lean Orb has helped over 70 companies transition away from single-use plastic through its disposable tableware and container alternatives.

“We project to eliminate 7 million plastic disposables from circulation this year,” said Lean Orb CEO Anastasia Mikhalochkina. She explained that these disposables are used on average for about 10 minutes yet take 500 years to break down, polluting water and soil for up to 16 generations. 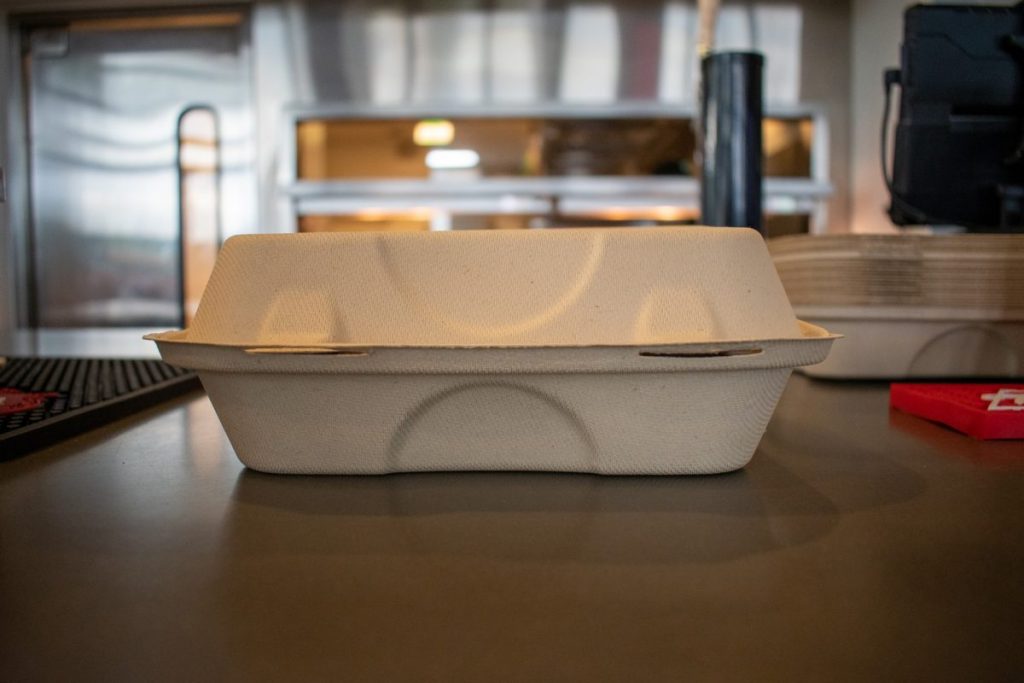 While the Rat has implemented several positive changes, cutting down its waste substantially, Thibault said that there is still far to go. She explained ECO agency’s current ideas include trading single-use plastic cups for washable, reusable cups, adding solar panels to the gliders on the patio and expanding the vegan-friendly options on the menu.

“Changes both big and small need to be made now,” Thibault said. “Our daily living practices need to be eco-friendly, and we can’t live sustainably if we keep business as usual, eating meat and drinking from single-use plastic at the Rat. For climate justice to be realized, every person and business needs to do their part.”

Students who frequent the Rat responded positively to the changes.

“It definitely solidifies my desire to go to the Rat,” said Amir Davoodi, a senior double majoring in public health and sociology. “Knowing that when I go there I am not hurting the environment as I may have been previously, I am more inclined to go.”

Amir Mahmoud contributed to the reporting of this story.

ECO Agency, Adidas bringing sustainability to football
Patrick Farrell on photojournalism, his career, how to make it in the industry