The quest for love is often a twisted play of lust and loss, and Summer Walker is over it. Following her “Last Day of Summer project” and a co-sign from Drake on her “Girls Need Love Too” remix, rising Atlanta R&B star Summer Walker released her highly-anticipated debut album “Over It” last Friday, Oct. 4.

The star-studded project features guest appearances by Bryson Tiller, PARTYNEXTDOOR, A Boogie Wit Da Hoodie and Jhené Aiko and is executively produced by beatmaker London on Da Track. Sampling Destiny’s Child and Usher while blending quintessential, contemporary R&B, the range in sound mirrors the range of emotions we feel through the stages of infatuation, love and heartbreak.

Walker successfully introduces herself as a potential R&B superstar and expresses her wide appeal over the 18 tracks. Nia Lennen, a senior studying psychology said her favorite songs are “Come Thru” and “I’ll Kill You.”

“Those are more ‘love-y’ songs, and they kinda remind me of my current relationship,” she said.

Flirtatious lyrics such as “You make me wanna come through, quarter after two,” “Caught my interest, talkin’ that sh*t, so intriguing” and “I wanna have some good fun tonight” invite the listener to experience the intoxication of infatuation. 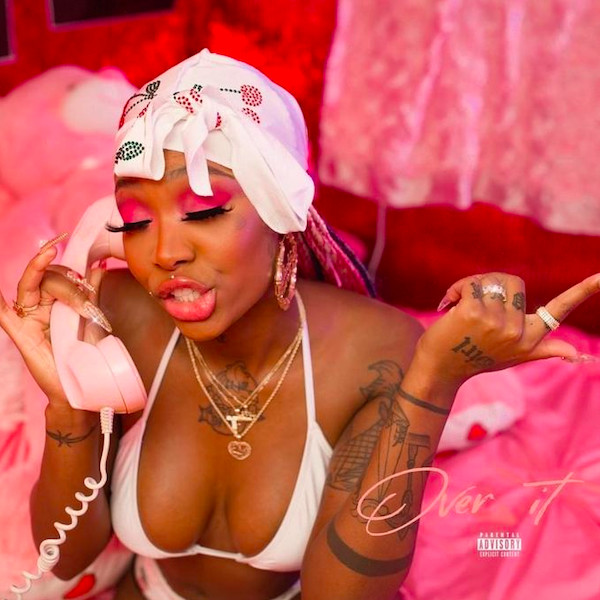 Lennan continued, “I love that ‘Come Thru’ is a remix of Usher’s ‘You Make Me Wanna’ with Usher on it. That’s iconic.”

It is worth noting that Walker features a plethora of popular R&B artists. In an overpopulated music market, endorsements from established stars are the catalyst to setting oneself apart.

Harmonious features from 6lack on “Like It” and Jhene Aiko on “I’ll Kill You” reflect the tranquility and intimacy of love with lyrics like “Fallin’ in love with every part of us, and just tune out the nonsense” and “I’ve been waiting so long for a love like this.”

However, sparks only last so long, then comes the distance. Walker interestingly echoes the disconnect of lovers-turned-strangers through technological references. On “Drunk Dialing… LODT,” the dial tone of a FaceTime call plays in the back, followed by an abrupt shwoop sound of an iMessage being sent. On her leading single “Playing Games,” she questions how partners can spend time together but never publicize it in lyrics like “Swear that you doing the most, but we take a picture, can’t post it. How that work?”

In unrequited love, there’s a breaking point, and Walker mirrors that shift through a tone that changes from grief to resentment on “Off of You,” directly criticizing the lover that took her for granted.

“You’ve been mistreating me, I wouldn’t leave it, ain’t you realize? That I ain’t got the time no more, I ain’t gotta cry no more,” she sings.

A personal favorite of mine off the album is “Fun Girl.” This track, featuring only her voice and an electric guitar, is reminiscent of her previously-released “Session 32.” “Fun Girl” strips down in the sound as well as in raw emotions, portraying the hurt that arises in deep moments of insecurity. Particularly for young women, the disinterest in submitting frequently makes us question if we’re desirable.

Walker asks “…Out of the categories of marriage, is it ’cause I know what I want just like you? ‘Cause I make my own money and my own moves?” This track particularly explores how society is unable to accept a woman who does what she wants and further criticizes how that double-standard doesn’t exist for men.

Despite anguish, hardship and the desire to be self-sufficient, at the end of the day, girls need love too. The album comes full circle with Walker concluding with the song that started the hype, “Girls Need Love Too” featuring Drake. Referencing sentiments of infatuation heard in other tracks, Walker reiterates that the search for intimacy ultimately never ceases.

While Walker has been on the radar for quite some time, “Over It” reveals the sheer potential of 23 year-old and establishes her as an up-and-coming R&B sensation. Walker rhythmically captures every aspect of this process we call love. Her ability to perfectly pack so many topics and sentiments in a 49-minute project is impressive.

Thematically, this album is as encapsulating as a juicy romance novel you can’t put down. As for the production, there is a healthy balance of late-night jams as well as upbeat percussion-heavy bops. The more upbeat tracks allow a more mainstream appeal– something that was missing off her last project. Walker has more than exceeded expectations.

In the words of Lennan: “It is a great addition to my R&B collection. And yes, it is definitely on repeat.”