Miami has a lot to improve following loss to Virginia Tech

The Hurricanes (2-3, 0-2) faced the Virginia Tech Hokies (3-2, 1-2) on Saturday in what turned out to be an exciting display of offense after a very poor first half showing.

Miami quarterback Jarren Williams started cold, throwing interceptions on three consecutive drives to start the game. The Hokies were able to capitalize and took a commanding 21-0 lead in the first quarter.

Backup quarterback N’Kosi Perry was then given the reigns and tasked with leading the Hurricanes to a seemingly impossible comeback.

“We felt like the way that Jarren started the game, that N’Kosi had a chance to come in and see if he could do something to light a spark,” said head coach Manny Diaz after the game. “It was just, as the game was going on, that N’Kosi gave us the best chance to win.” 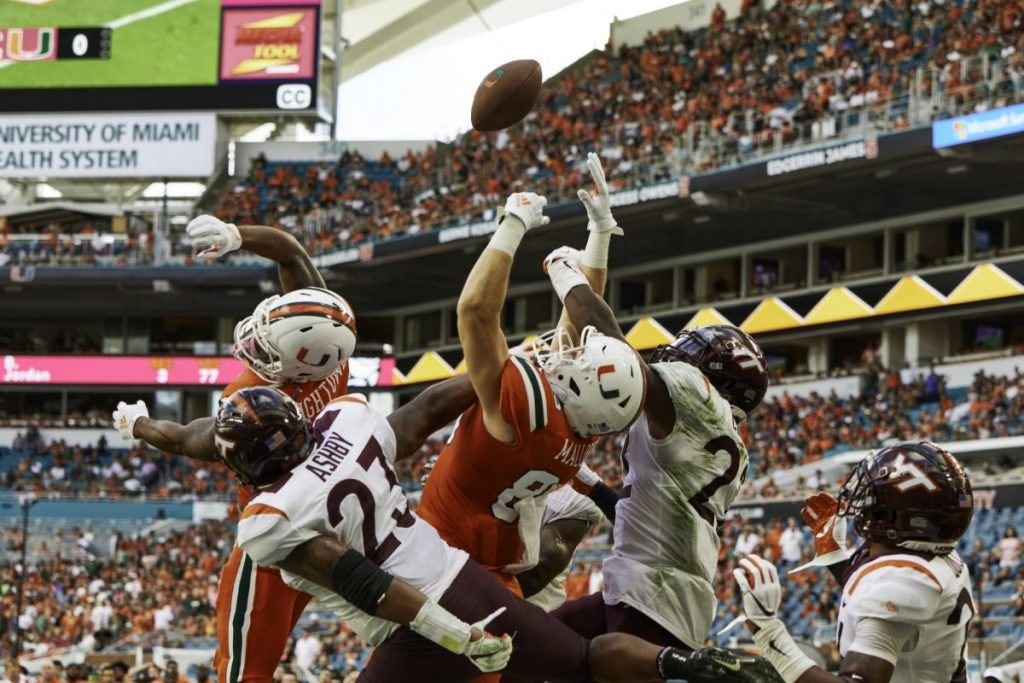 N'Kosi Perry's pass bounced off the hands of Will Mallory (85) before Mark Pope (8) was able to make the catch for a touchdown. Photo credit: Josh Halper

Perry put up more than 400 yards and four touchdowns in just over three quarters. He looked composed in the pocket all game long, completing pass after pass and leading the team to its second highest point total of the season, their highest against an FBS opponent.

Perry finished out the second quarter by completing a hail-mary pass to Mark Pope for a 38-yard touchdown. The improbable completion was quite a spectacle as the ball soared into a crowd of defenders, bouncing off teammate Will Mallory’s hands, before finding its way into the open arms of Pope.

The Canes headed into the locker room down 28-7 at the half and came out strong in the second half, starting with a quick three and out forced by the defense, followed by a masterful 88-yard drive that ended with a six-yard touchdown pass to tight end Brevin Jordan.

After Miami’s defensive breakdown in the first half, the defense played well throughout the third quarter, giving up zero points, until the Hokies had impressive four play 80-yard drive that resulted in another touchdown.

The momentum, however, quickly shifted back to Miami as Jeff Thomas made his first trip to the end zone this season, with a magnificent grab over a Virginia Tech defender. Perry continuously leaned on Jordan and Thomas throughout the game. Another Thomas touchdown brought the game within eight points, before Diaz made a risky decision to go for two. Fortunately for the Canes, the decision paid off, as running back DeeJay Dallas made a brilliant effort, extending the ball over the right corner of the end zone to close Virginia Tech’s lead to six.

“Like we talked about, it’s one of these data type deals,” Diaz said. “Basically, the notion that you are going on is that you have two shots to get two points, but if you get it the first time, you can kick a PAT and ideally win the game. We didn’t run the two-point conversion the way we wanted to and it was an insane effort by DeeJay Dallas to get it in there.”

“Obviously everybody knows we’ve got issues with place kicking,” Diaz said in a press conference Monday. “It came up at a very critical time, which is very disappointing, but that can happen.”

The Hokies responded with a touchdown of their own on the next drive, giving Miami just about two minutes to try and force an overtime scenario. The Canes were given two opportunities to score from the 10-yard line after the refs put one more second on the clock, but after a poorly run play, Miami couldn’t convert, ending the game in a loss.

When you take out Williams’s first quarter woes, the team actually performed pretty well offensively, exceeding Virginia Tech in almost every offensive category, but when any team faces an uphill battle like that, it is very hard to succeed.

After a performance like the one Perry had, it’s hard to think that he will be overlooked when the coaching staff makes a decision on who will be their quarterback against Virginia on Friday, although Diaz emphasized that Williams is still their guy going forward.

“We still believe that Jarren is our guy, so I don’t know what would change,” Diaz said.

Defensively, Miami looked unprepared and disconnected for the majority of the game, especially in regard to the running abilities of Virginia Tech quarterback Hendon Hooker, who ran for 89 yards and a touchdown, while throwing for three. For a team that is notorious for its defense, the turnover chain didn’t make a single appearance, which is a telling stat, according to Diaz.

“What can’t happen is the way we played defensively,” Diaz said. “Surrendering 42 points to Virginia Tech, that’s not the Miami standard.”

Miami now has a short week to prepare to face 23rd-ranked Virginia on Friday night. After their performance this weekend, a win against the Cavaliers is difficult to imagine. There is no doubt that changes must be made on both sides of the ball for the Canes to get a win.