Wrapping up the end of an eventful concert and festival season– the time of year marked by late sunsets, music festivals every weekend and every musician deciding to go on tour– the Miami stop of the IGOR tour proved Tyler, The Creator is anything but finished.

On the evening of Sept. 29, the white, silver and usually posh American Airlines arena became the meeting spot for Miami’s e-boys and girls, most sporting an oversized (usually graphic or vintage) tee tucked into cargo or straight-legged pants that appear to be a little too short, an Off-White belt and maybe a faux bike chain to give the outfit that extra edge. And in some some cases, far more than I’d imagined, the famous IGOR wig. You know the one. Whether bought beforehand or at the venue’s merch stands, that bleach-blond, synthetic, bowl-cut-esque wig was everywhere.

Unfortunately, a combination of worse-than-usual Miami traffic and a search to find parking that didn’t cost more than a nice dinner for two rendered me about 30 minutes late, putting me in my seat just in time to catch Goldlink’s– the first of Tyler’s two openers– last few minutes. He saved his most popular song, “Crew” ft. Brent Faiyaz and Shy Glizzy, for last. The crowd, whether in general admission or assigned seats, went crazy, jumping up and down to the beat.

The transition between the first and second acts did not last long. Suddenly, the lights dimmed, the arena walls rumbled with excitement, and everyone had their Snapchats up and ready to record. After a long intro complete with smoke and visuals from his music videos, rapper Jaden Smith began a high-energy performance that did not waver from start to finish.

“If y’all feeling good tonight, say, ‘HELL YEAH!'” he said, to which the audience responded with an enthusiastic “HELLLLL YEAH!”

Smith performed songs from both his 2017 album “SYRE” and his 2019 album “ERYS,” always adding something new to the set and never giving the audience a chance to get bored. At one point, he started shaving his head mid-song and then continued the performance as if nothing happened. At another, he put on a ski mask, brought a camera man on stage and began shooting clips for an upcoming music video.

And for what seemed like only a second, I looked away. Almost immediately after, I heard screaming from the surrounding fans as they grew closer and closer to me. It was only then that I realized that in that moment my eyes were not on the stage, Smith had left and was now standing, mic in hand and still rapping, less than five feet away from me.

The 10-year-old girl in me– whose favorite movie was the “Karate Kid” remake and had Justin Bieber’s “Never Say Never” ft. a young Jaden Smith on repeat– was definitely starstruck.

Smith remained interactive throughout the entire show, saying that this tour was the best of his life. He seemed genuinely humble and grateful, repeatedly thanking everyone involved.

“Who’s ready to see my mother f*cking boyfriend touch down?” he asked, making light of the internet joke (or possible truth?) that he and Tyler, The Creator are dating.

“This is my last show on the IGOR tour. I’m done,” he said before leaving stage. “I love you all. Until next time.”

Still partially empty when I arrived, the arena filled up. The red color of the stands quickly became replaced with people– young and old, black and white, gay and straight.

Tyler emerged from backstage wearing the same turquoise suit from the “EARFQUAKE” video, white glasses, and of course, the wig. He opened with “IGOR’S THEME,” to which he walked out, stopped in the spotlight, and literally just stood there…and stood…and stood, until going completely insane, flailing his body about.

“Mother f*cking Miami,” he said. “I’m not going to lie, I wasn’t a fan of y’alls city a couple years ago. But no lie, over the past few months, I’ve grown to love this f*cking place. Thank you for having me.”

Tyler performed various songs from his latest album, IGOR, including “A BOY IS A GUN*” and “NEW MAGIC WAND,” which he prefaced by saying he lives vicariously through those of us who get to go “buck f*cking wild” when it comes on.

The set included dance moves that resembled those of a middle-aged white dad at a family barbecue, a piano solo that transitioned into “EARFQUAKE” and older songs such as “She,” “911/Mr. Lonely” and “Yonkers.”

“That was from ‘Goblin,’ for those of you who were around for that,” he said. The crowd went insane, but Tyler was not convinced. “Half of y’all were only 13, shut the f*ck up.”

He was right. I was, but I remember that angsty time period like it was yesterday.

Staying true to his persona, Tyler let the snarky comments and curse words fly all night. 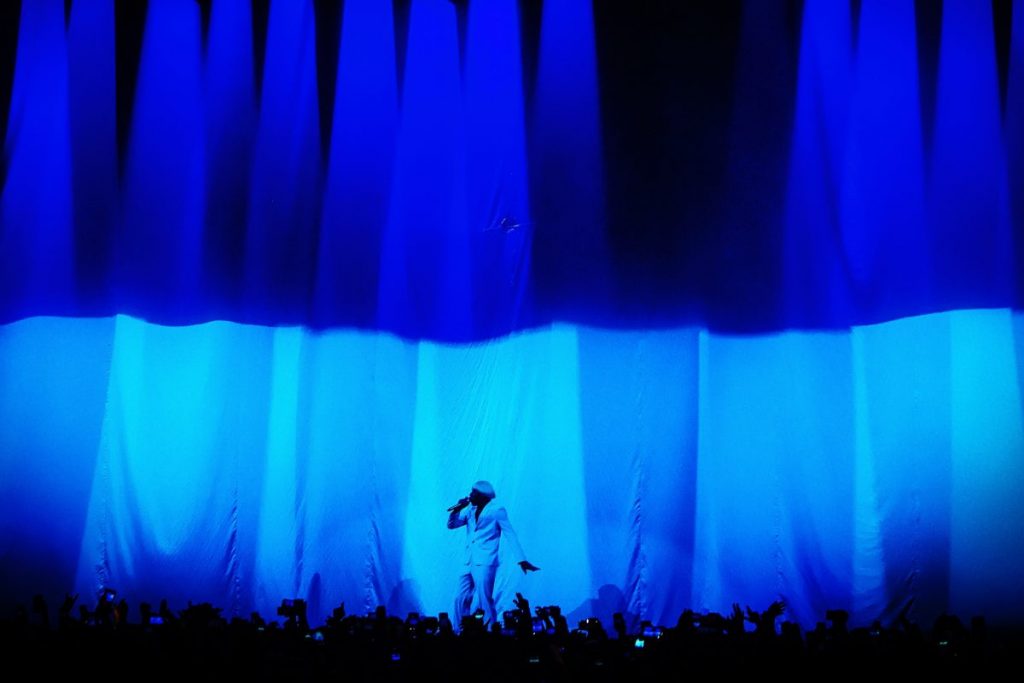 Tyler, The Creator performs at the American Airlines arena on Sept. 29, 2019 as part of his IGOR tour. Photo credit: Jake Davis

Mid-performance and completely unprovoked, he looked at the audience and said “Stupid b*tch. F*ck you.” And when reminded that there were children present, he responded with a simple “F*ck dem kids.”

This show was not for the weak.

As the show wrapped up, Tyler– in a hunched over position that seemed intensely uncomfortable– slowly crept away from the audience, leaving what was going to happen next a secret. At once, fire shot from the stage and the backdrop– which had been visuals from IGOR all night– was replaced with those from his Odd Future days.

“Who Dat Boy” began to play, and again, the crowd that never seemed to lose energy, went crazy. They loved him, and even continued to cheer through a water break.

At the end, Tyler bowed and abruptly left stage, leaving an empty spotlight and everyone wanting more.

A big fan of the intensity and anger of Odd Future, I was not the biggest fan of IGOR. I longed for the old Tyler.

This show made me realize that that Tyler never left. The weird black guy that made middle school me feel understood is still here, just happier.

The show was weird. It was uncomfortable. But it was authentic and captivating.

That’s something I can definitely get behind.