Home » Hurricanes suffer loses across board, score some wins

Hurricanes suffer loses across board, score some wins

The duo of matches began on Friday at Wake Forest, where UM swiftly took care of the Demon Deacons 3-0 (25-17, 25-21, 25-21). The Canes hit .297 as a team. Kennedy Prince, Janet Kalaniuvala and Elizaveta Lukianova each shared a game-high 10 kills. Prince led the team in blocks with six, and Savannah Vach recorded a game-best 35 assists.

Miami (6-4, 2-0 ACC) will return home for another pair of games next weekend. They will take on defending ACC champs University of Pittsburgh on Oct. 4 and University of Virginia on Oct. 6. Both games are at the Knight Complex. 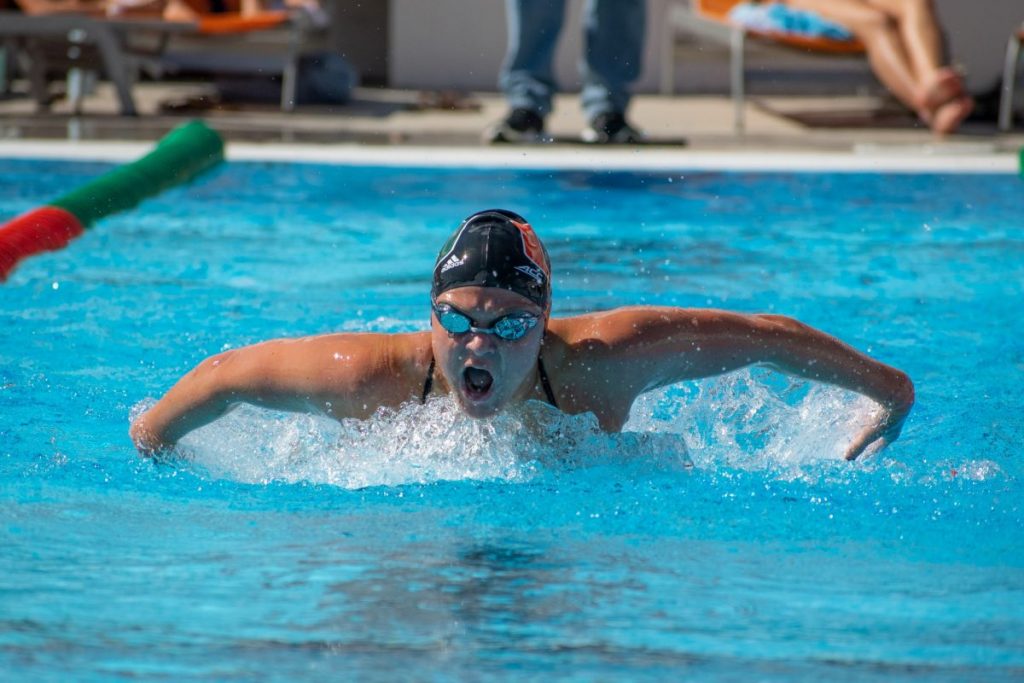 UM opened its fall season with meets against in-state rivals Florida State and FIU, falling short in both competitions. A 90-203 loss to Florida State at the Norman Whitten Pool kicked off the Hurricanes’ season. Nevertheless, freshman Andrea Todorovic represented the Canes well. She did the 100-yard breaststroke in 1:05.60 and the 200-yard breaststroke in 2:27.17. In diving, freshman Mia Vallee led UM in the 3-meter event, finishing second individually with a score of 305.63.

The team crossed town Saturday morning for 131-169 loss at FIU. Sophomore Zorry Mason won the team’s first individual event in the 100-yard breaststroke with a 1:03.60 time. Todorovic also picked up an event victory, finishing the 200-yard backstroke in 2:04.74.

The team is in action next on Oct. 11-12 at the Southern Methodist University Classic in Dallas.

The Canes finished 11th overall at the Schooner Fall Classic in Norman, Oklahoma, shooting 27-over par during the three-day event. Senior Renate Grimstad finished 10th on the individual leaderboard, a team-best, as she shot an even-par. Junior Kristyna Frydlova placed 20th while shooting two-over-par, and sophomore Anna Backman tied for 59th and shot 12-over. Freshmen Daniella Barrett and Morgan Pankow rounded out the group for Miami, shooting 13 and 33-over, respectively.

Their next tournament will be on Oct. 12 at the Betsy Rawls Invitational in Austin, Texas.

Four Canes traveled to Athens, Georgia for the Southern Intercollegiate Championships over the weekend. Doubles partners William Grattan-Smith and Stephen Madonia fell in the consolation finals 6-0 to a University of Georgia doubles pair. Sophomore Franco Aubone fell in the singles consolation 6-3, 6-3. While Aubone and partner Benjamin Hannestad were defeated by Texas in a separate doubles bracket, Hannestad won 6-1, 6-1 in his singles consolation game.

The team will head to Tulsa, Oklahoma for the ITA Men’s All-American Championships on Oct. 5.

The women’s tennis team split up at two competitions. Nada Dimovska and Lucia Marzal went a combined 4-5 across both doubles and singles at the ITA Hall of Fame Classic in Williamsburg, Virginia. Meanwhile in Orlando, four other Canes combined to go 13-10 overall at the USTA Fall Ranked Spotlight. Doubles duo Selma Cadar and Yuna Ito advanced to the final of their doubles bracket, falling 7-5 to an Oklahoma State doubles pair. Sophomore Daevenia Achong advanced to the final of the singles consolation draw before being defeated by Kolie Allen of Ohio State, 6-4, 5-7, [10-8].

The highlight for the team was defending national champion Estela Perez-Somarriba’s three-set singles championship win over Shiroi Fukuda, also of Ohio State. Perez-Somarriba would recover from dropping a first-set tiebreaker to win 6-7 (2-7), 6-2, 7-5.

The team will split up again next weekend between the Bedford Cup in Fort Myers and the ITA Women’s All-American Championships in Tulsa.