Between Einstein’s, the Billy Goat and two Starbucks locations, there is no shortage of coffee at the University of Miami. But there’s only one option that serves it from a bike: BrewBike Miami.

Students can spot the BrewBike stand parked outside the Merrick Building, where customers are served cold brew coffee and tea as they walk to class.

“BrewBike has become so handy during my busy schedule,” said Destiny Daniels, a sophomore majoring in biology.

Cory Levy, the chief people officer of BrewBike Miami, said catering to students’ hectic lives is at the heart of BrewBike’s mission. 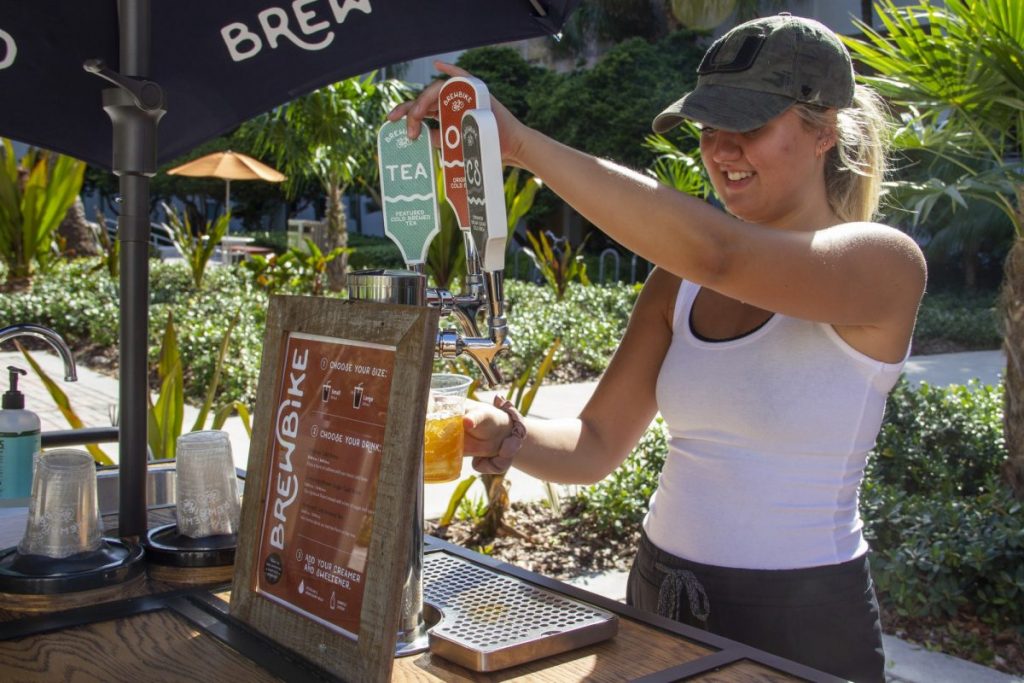 “The whole concept of serving coffee off a bike was to be a quick and convenient option for students who did not have the time to wait in long lines between their classes,” said Levy, who is a sophomore majoring in finance.

BrewBike began as a startup four years ago on the campus of Northwestern University and quickly expanded to other schools. Now, its operations span three states and including various bicycles, retail stores and wholesale customers.

And in addition serving its customers, BrewBike seeks to serve its employees. The business is completely student run, offering young adults the chance to gain hands-on experience.

Since its beginning, BrewBike Inc. has put over $100,000 in the pockets of student representatives and allowed students across the nation to experience the process of running a startup.

“Working for BrewBike Miami has already been such an amazing experience,” said Ally Bush, a junior majoring in marketing and management and the campus founder and chief executive officer at BrewBike Miami. “Over the summer, collaborating with members of the BrewBike HQ team to develop an in-depth, roll-out marketing playbook that can be implemented at any other school was an incredibly rewarding experience.”

During its first week of operation, the BrewBike division at UM broke a company record, selling more than any other campus location. BrewBike Miami aims to start selling its coffee to wholesale consumers and at special events. Eventually, the team wants to open a small “micro-retail” indoor cafe location which would allow BrewBike to sell more specialty coffee and tea drinks, as well as food items. The team also hopes to expand at UM, adding more bikes around campus.

Levy said she is looking forward to watching BrewBike Miami continue to grow.

“The response we have gotten from students and from the university has been extremely rewarding, and we already have so many plans to expand and innovate,” she said, attributing the stand’s success to the hard work of its employees and Florida’s hot climate.

“Iced coffee and tea are essentials to getting through long and hot days on campus,” Levy said.

Bush said that her team wants to establish a strong brand image on campus, develop a loyalty program and distribute other brand assets for BrewBike Miami.

The student employees are also striving to be more eco-friendly. BrewBike Miami offers compostable cups and is currently working on a finding a good alternative to plastic straws. The startup also offers almond and oat milks without charging extra for these non-dairy alternatives. 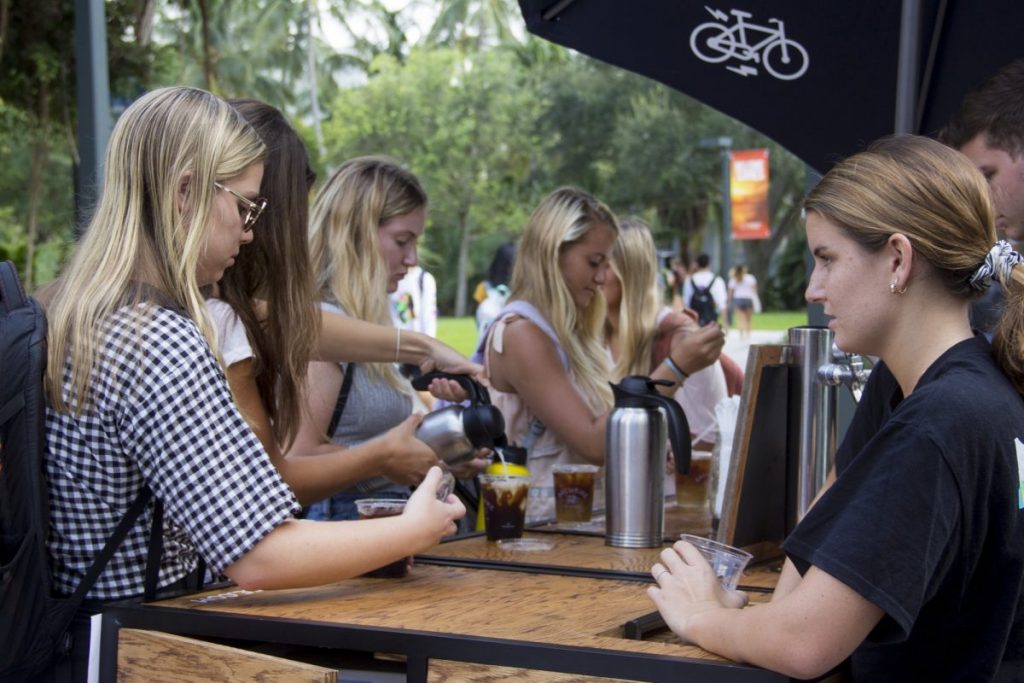 Students line up Sept. 18 at the BrewBike Miami stand, which is located outside the Merrick Building. Photo credit: Rohama Bruk

To avoid plastic waste, students can also bring their own tumblers, regardless of size, and fill them up with original cold brew, cinnamon brown sugar cold brew or iced tea for the price of a small-sized drink.

Bush said she is using what she learns in her business classes at UM and applying it to her current role as campus CEO. One strategy that Bush is pushing forward with BrewBike is called the “virtually flat hierarchy,” which emphasizes involvement of all employees in decision-making processes and features few levels of management. Through this strategy, Bush said she is able to promote inclusivity and a more unified team.

“Since all employees of BrewBike are students, we are all in this together,” Bush said. “And through the virtually flat hierarchy, everyone feels equal and welcomed. I want every person who works for BrewBike Miami to feel that their ideas and feedback are extremely valued.”

Levy said her experiences with BrewBike have been positive, teaching her lessons and skills that she’ll be able to use in the classroom and after graduation.

“Running a business as a student while balancing my extracurriculars has been challenging, but it has shown me that anything is possible,” she said.