Just four weeks into the season, college football has shown that nothing is guaranteed, and the Miami Hurricanes learned this lesson first hand Saturday when they narrowly defeated the Central Michigan Chippewas 17-12.

“Tonight was our second win and probably our fourth best performance of the four we’ve had so far,” head coach Manny Diaz said. “With all that being said, the only thing that we could accomplish today was beating Central Michigan, which, after the course of 60 minutes, when everything was added up, that’s what we got done.”

The Hurricanes offense, which was that was the star of last week’s win against Bethune-Cookman, was nowhere to be seen against Central Michigan.

Generating just 301 total yards of offense, Miami scored a touchdown in the opening drives of the first quarter and third quarter. Aside from that, the offensive production was minimal. 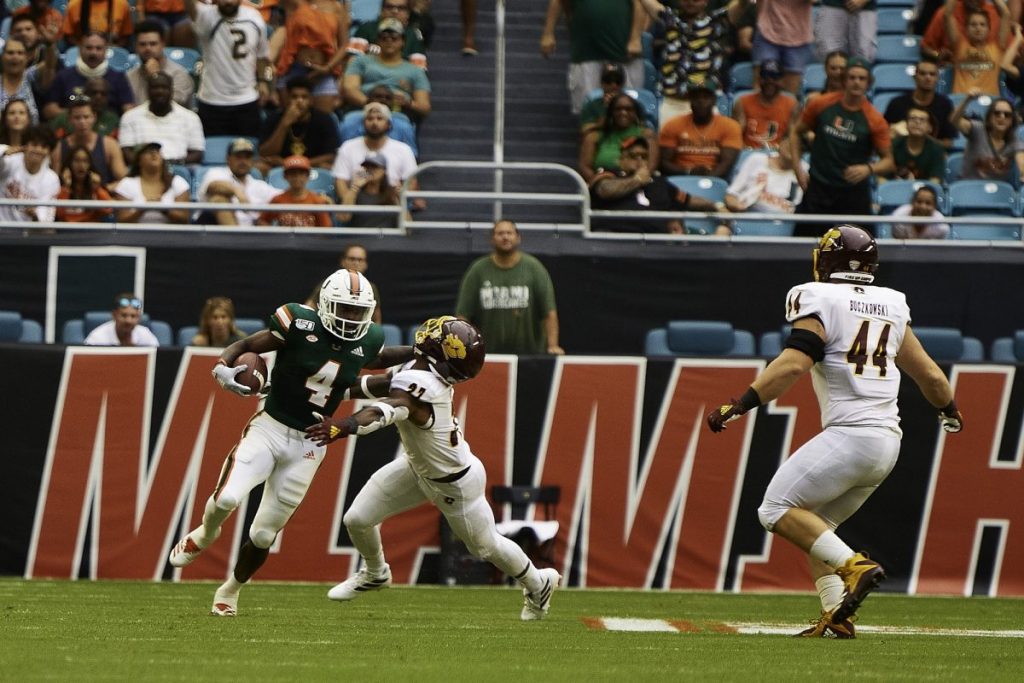 “Today I don’t think that we ran the ball very well,” head Coach Manny Diaz said. “And not just in terms of our stats, but also in terms of the way we hit things and the way we blocked things up; it was substandard.”

Running back DeeJay Dallas was held to just 34 rushing yards, despite scoring the first touchdown of the game on a one yard run. The Canes opening drive featured two passes to sophomore tight end Will Mallory, who’s 59 receiving yards on those two catches was a career high.

Central Michigan’s first two points came on a safety after quarterback Jarren Williams was sacked in the Canes end zone early in the second quarter.

The safety was the first of four sacks on Williams, as the offensive line had a hard time protecting their quarterback.

True freshman left guard Zion Nelson visibly struggled in the game. His two consecutive missed blocks caused two of Williams’s four sacks, one of which caused a fumble that was recovered by Central Michigan late in the second quarter.

Diaz partly attributed the poor play of the offensive line to the lack of preparation he saw from his players this week. 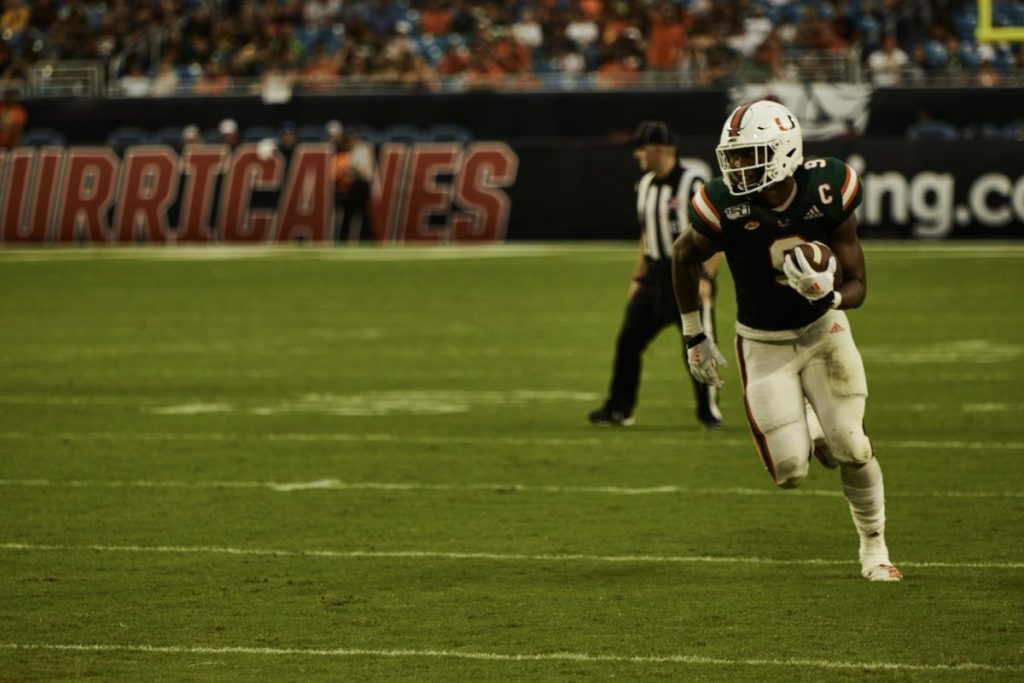 “The players know that our Wednesday practice this week was probably as poor of a Wednesday practice as we’ve had throughout the course of the year,” Diaz said. “They wonder, does that matter? Then you watch us play tonight and it matters, especially with younger players. Look, it doesn’t matter that they are young. If they are Miami Hurricanes, they have got to go play. That’s the understanding of what it means to be a big-time guy, week in and week out, and not a guy that plays good for a couple of games and then doesn’t play well. Some of those signs you could see on Wednesday and that is part of the maturation process that some guys have got to go through.”

The Canes opened up the second half with a dominant scoring drive, ending in a six yard pass from Williams to receiver K.J. Osborn.

Despite being sacked four times, Williams still managed to throw for 250 yards, completing 17 of 24 pass attempts. Williams also became the first quarterback in Hurricanes history to throw 100 pass attempts without a single interception.

Defensively, the Canes showed their ability to cause turnovers. Defensive tackle Gregory Rousseau brought out the turnover chain for the first time in his career after he sacked Central Michigan’s David Moore and recovered a fumble late in the first quarter.

“I saw that the quarterback was about to throw it, and I was like ‘man, I might not get to him,’ so let me just throw my hand out there,” Rousseau said. “I just put my hand out there and then he fumbled.” 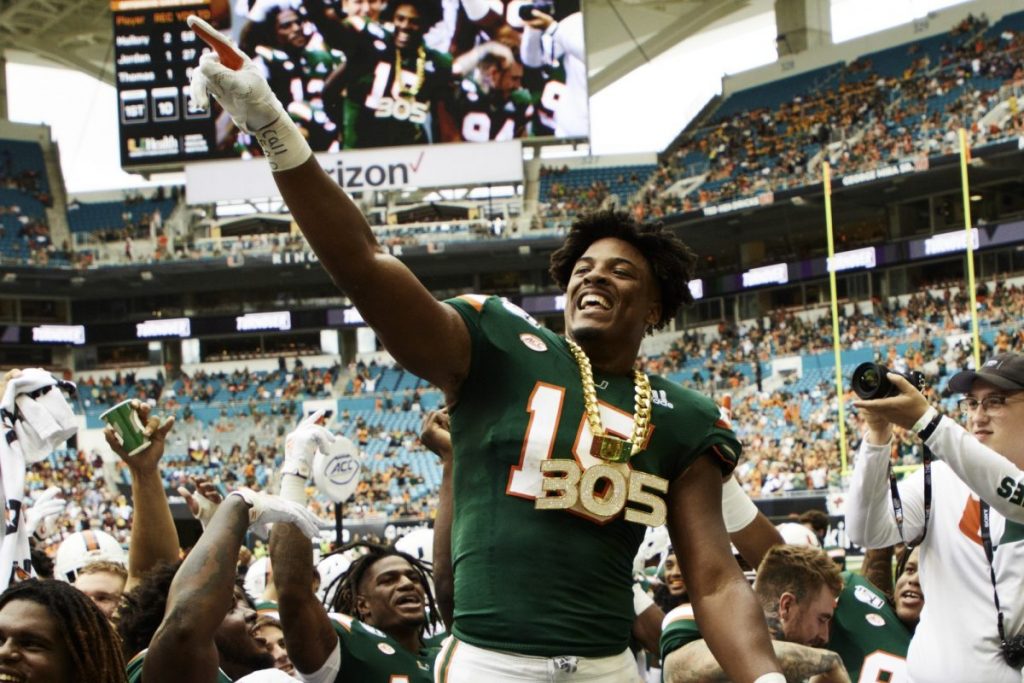 Gregory Rousseau (15) wears the turnover chain for the first time in his career after forcing and recovering a fumble. Photo credit: Josh Halper

In the second quarter, Jonathan Garvin sacked Moore and forced a fumble that was recovered by Pat Bethel. Al Blades Jr. was the last to don the chain, as his interception with six seconds left in the game sealed the win for the Canes.

However, the forced turnovers were overshadowed by the Canes’ inability to stop Central Michigan in third down situations without committing penalties.

On Central Michigan’s only touchdown drive of the game in the fourth quarter, the Canes gave up two fourth down plays to the Chippewas, before committing four penalties in the red zone that allowed CMU to continue advancing the ball. Central Michigan was able to run 17 plays in a drive that lasted eight and a half minutes.

Veteran linebacker Shaq Quarterman says the players have to learn to move on after committing a penalty.

“You have a good play, you have to forget about it,” Quarterman said. “They’re about to snap the ball. Regardless of it being aggravating and redundant, we just line it up every play that we could until we couldn’t anymore.”

The Canes will get two weeks of rest before a conference matchup with Virginia Tech. The team plans to use the two weeks to get better for the next game.

Miami vs. Central Michigan Live Blog
Why colleges should do more to support adjunct professors