Home » Sade Prithwie speaks at ‘State of the U,’ attests to influential UM experience

Sade Prithwie speaks at ‘State of the U,’ attests to influential UM experience

Sade Prithwie didn’t have a top-choice college when she was in high school. But as soon as she arrived at the University of Miami, she knew she made the right choice.

Prithwie, a senior studying human and social development and Spanish, spoke at Julio Frenk’s second annual “State of the U” address about her decision to attend UM and her experiences that followed.

“When I began my college search, I was destined to find a location that would aid in my pursuit to become fluent in Spanish,” Prithwie said. 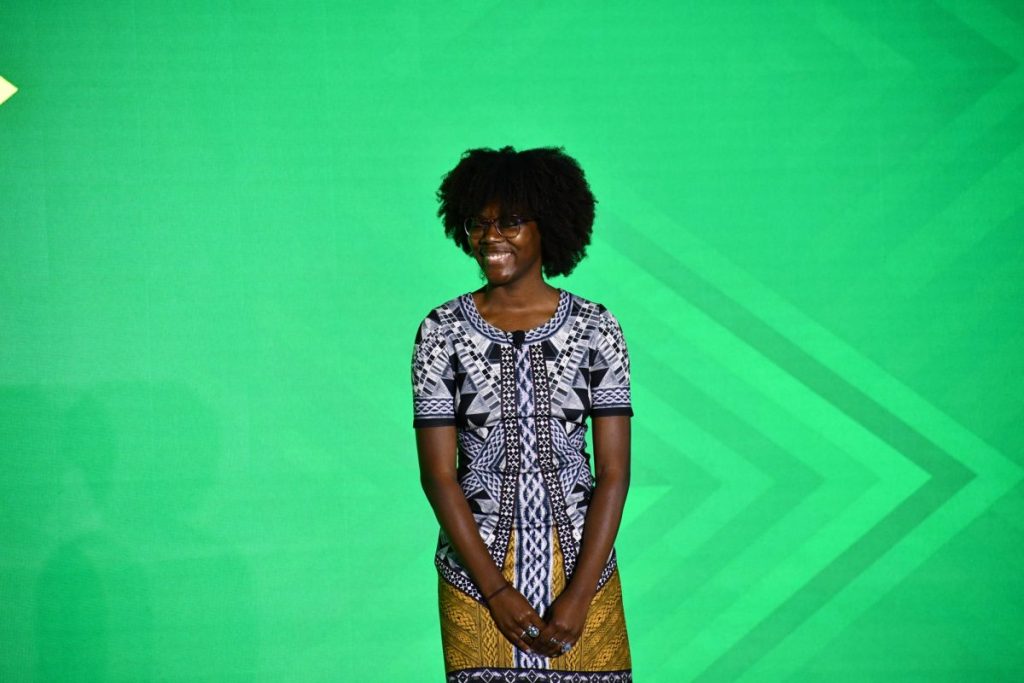 Senior Sade Prithwie, who is studying human and social development and Spanish, spoke at President Frenk's "State of the U" address Sept. 12. Photo credit: Jared Lennon

At first, she didn’t have her sights set on any place in particular. Prithwie just knew she wanted to leave her home state of New York.

But upon arriving to campus here, Prithwie said she discovered that UM felt like home.

On her first day, Prithwie met Michelle Maldonado, professor of religious studies and assistant provost of undergraduate education. At the time, Maldonado was the senior faculty member for Hecht Residential College, where Prithwie lived her freshman year.

“I connected with her immediately,” Prithwie said. “I feel it’s very important to surround yourself with positive influences, and she’s definitely been one for me.”

Maldonado’s impact led Prithwie to apply to be a residential assistant in Hecht so she could “create an environment that was just as welcoming for incoming students as the one that [she] had.”

Prithwie said the day she was chosen to become an RA was one of the most exciting days of her life. This is the third year she has worked in the role.

“Being an RA, being a part of the staff that I’m a part of, being a mother figure to these residents each and every year definitely made me feel more connected to the university,” Prithwie said.

Prithwie is also a part of the Caribbean Student Association, and a sister in Delta Sigma Theta Sorority Inc., which she said provides another sense of belonging at UM.

“Now, I have so many sisters,” Prithwie said. “They’re not friends. They’re my actual sisters that I can depend on, I can count on, I can call whenever I need them.”

But a sense of community through her job and extracurriculars wasn’t all Prithwie discovered in college. She now has a clear vision for what she wants to accomplish after she graduates.

Prithwie came into UM as an entrepreneurship major, she said, because she knew she didn’t want to work for anybody else.

After taking a few classes in the human and social development major, Prithwie decided to change her major and pursue a career in couple therapy. After she graduates, Prithwie is going to Spain for a year through the Ministry of Education to teach English at an elementary school while also practicing her Spanish. Upon her return, Prithwie said she hopes to get a Ph.D. in counseling psychology from UM.

In her time here, Prithwie has involved herself in various research teams, including assisting her former professor Samantha Lang on her dissertation study on caretakers of Alzheimer’s patients. Prithwie is also working on completing her honors thesis on Instagram attachment theory and romantic dating relationships.

Her involvement at UM ultimately led her to be nominated and chosen as the only student speaker at the “State of the U” address.

Maldonado said she thought Prithwie did a fantastic job.

“I thought her speech was inspirational and touching. I was moved to hear her describe the impact I have had on her, and I know she has had a significant impact on her residents and the broader university community,” Maldonado said.

Laura Kohn-Wood, dean of the School of Education and Human Development, said she was not surprised that Prithwie was chosen as the student speaker.

“She is an outstanding representative of the student experience at UM. She has been able to create a unique and well-rounded college career here by finding majors that develop her interests, taking courses like ‘Intergroup Dialogues’ that allow her to learn from the diversity we have within our campus community and engaging in extra-curricular opportunities that inspire her,” Kohn-Wood said.

Overall, although Prithwie said she was “shocked” to be the only student speaker, the experience was rewarding.

“I definitely believe that giving this speech has given me a whole lot more confidence in life to do amazing things. I was connected with so many great people after having had the opportunity, and I’m really appreciative of it. And in regard to my time at UM, this is the best college experience I could have asked for,” she said.