There are not many things redshirt senior running back Jimmy Murphy loves more than being a Miami Hurricane.

“I love this program,” Murphy said. “Whether it is handing out water to the players, or whether it is scoring a touchdown, there is nothing like being a Miami Hurricane. I promise you that.”

When the 5-foot-7, 195-pound Murphy ran into the end zone to score the last touchdown of the Canes 63-0 win over Bethune-Cookman Saturday afternoon, his exuberant celebration showed just how much it meant to him.

“I’m pretty sure that’s close enough to when your child is born,” Murphy said. “That was just an unbelievable feeling and for certain I’ll have that for life.”

But before he scored his first career touchdown, Murphy took a long and difficult road to get where he is today. 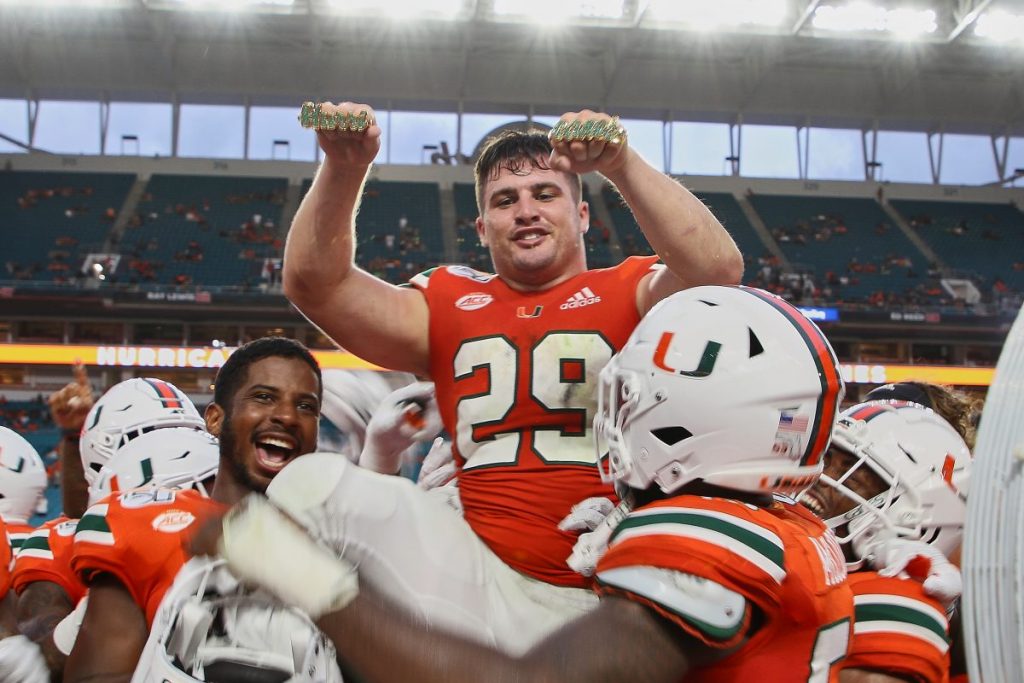 Two and a half years ago, the Connecticut native decided to try out for the football team as a walk on.

“When we got to the try out, there were like four guys there and they said, ‘Okay, we’ll send you an email to see if you’re on the team,’” Murphy said. “After I’m done, I texted my girlfriend, and I called my dad, and I said, ‘I hope I made it because this is all I’ve ever wanted.’”

Later that day, Murphy was in an Uber on his way to the beach when he got the news he’d been waiting for all his life. The message read, “Congratulations, you’re a Miami Hurricane.”

“I told the Uber driver to pull over,” Murphy said. “He let me out on the side of the highway, and I lost my money, but it was the best day of my life.”

Murphy went home to celebrate the news with his family and buy a lot of Miami gear.

As a walk-on member of the team, Murphy quickly earned the respect and admiration of his teammates. Not only that, he earned himself a starting spot on special teams, playing in seven games as a redshirt junior, posting four tackles and eventually being named one of five team captains at the end-of-the-season awards banquet.

When Richt suddenly retired at the end of the season, Murphy didn’t know if he would be coming back as a member of the team next season after graduating from Miami with plans to go to medical school.

“I reached out to Coach Diaz saying I really want to be a part of this team,” Murphy said. “He goes, ‘Let me give you a call back.’ That day he called me back and he said, ‘You’re a Miami Hurricane again.”

Murphy said he is very thankful that head coach Manny Diaz brought him back to play for his final year of eligibility.

“I wouldn’t be back here if it wasn’t for Coach Diaz,” he said. “He brought me back. I thought I was done with the game. I owe him everything. That’s it. I just really want to thank him and the rest of my teammates.”

Murphy is loved by his teammates, who know him as a selfless and inspirational leader.

“He’s all about the team and he comes out there and gives his all every day, no matter what circumstances it is,” quarterback Jarren Williams said. “[Even if] he’s got a broken hand, he’s still going to go 120 percent.”

Murphy’s teammates were elated by his touchdown run. In fact, their celebration resulted in a 15 yard penalty for unsportsmanlike conduct.

“Earlier in the week, I was like, if Jimmy gets in, I’m going to be the first one to meet him after the touchdown,” said running back DeeJay Dallas. “I don’t care if we get a penalty. That’s my boy. I told Jimmy he was going to get one and he got one. So, I’m proud of him.”

While Diaz wasn’t thrilled about the penalty, he said it was no surprise that Murphy found his way into the end zone.

“We knew that even through training camp, that he was going to score a touchdown in a game, and that will not be the last touchdown that he scores this year,” Diaz said. “He is a guy that everyone on the team has the utmost respect for.”

Despite all the attention Murphy has gotten, right now his main focus is getting better.

“To be honest with you, I’m gonna go out and celebrate,” Murphy said. “But I said to my coach, ‘I just want to get better.’ This team wants to get better.”