Thousands of fans flooded into the Fillmore Miami Beach last Wednesday. The occasion? Lizzo— the Detroit-born singer, songwriter, rapper and actress at the height of her career— was in the building.

The venue was intimate and stylish, fit for a show that matched. Scheduled to start at 8 p.m., the performances started only slightly late. Around 8:20 p.m., a woman appeared, sporting her natural hair and a snakeskin two-piece set under a blue fuzzy coat. Her smooth vocals caught my attention from the moment she stepped on stage.

After finishing the opening song, which I later found out was titled “Facetime,” she introduced herself as neo-soul singer Ari Lenox. No stranger to the world of R&B and briefly familiar with her music, I was shocked. Her vocals— much more soulful and moving than I remembered— sounded incredible in person, so much so that I had not recognized her.

Lenox performed music from her newest album, including “Whipped Cream” and arguably her most popular song, “Shea Butter Baby,” with which the album shares a title.

“Y’all ready for Lizzo?” she asked before continuing into her last two songs. The crowd screamed, letting Lenox know that we were indeed ready. “Me too, sh*t,” she said through chuckles.

Lenox gave attendees the true experience of a minimalistic R&B concert, keeping her talent the central focus. The simple backdrop of velvet show curtains and an accompanying band of only drums, guitar and piano kept the attention on her.

Even during the transition time between Lenox and Lizzo, the audience was lively. The DJ played songs including Panic! at the Disco’s “I Write Sins Not Tragedies,” TLC’s “Scrubs” and Missy Elliot’s “Get Ur Freak On,” all of which fans sang as passionately as the one before. The rapid changing of genres did not seem to bother anyone in the sold out crowd, unsurprising as the main act’s music often does the same.

Around 9:20 p.m., the lights dimmed, the audience screamed, and the curtains opened. It was time for Lizzo.

The simple backdrop was replaced with a white, angelic background and a centerpiece that resembled a golden pulpit. Lizzo emerged wearing a matching gold choir robe— which was later revealed to be hiding one of her iconic leotards that matched her bright blue eyeshadow— belting out the lyrics to her song “Heaven Help Me,” bringing the church-like decor full circle.

Energetic from the moment she stepped on stage, Lizzo quickly transitioned into her song “Worship” and was joined on stage by her backup dancers. In true Lizzo style, they were beautiful, curvy and wearing matching blue spandex catsuits. The crowd screamed so loud that the venue seemed to be shaking, and I could barely hear the impressive notes Lizzo was effortlessly hitting on stage. 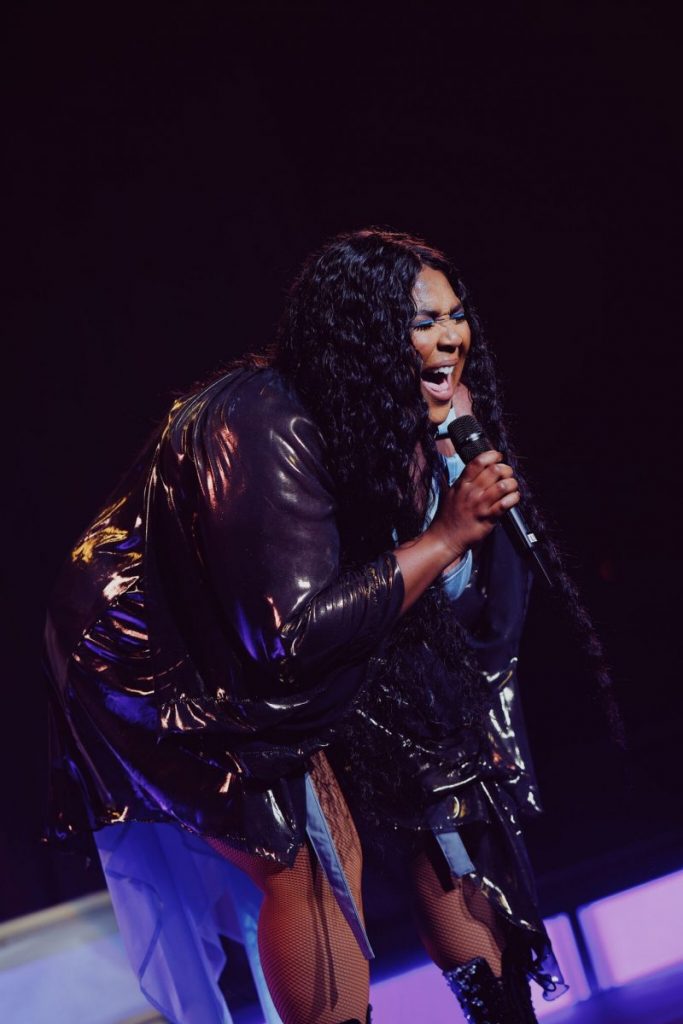 Lizzo performs "Cuz I Love You," at the Fillmore Miami Beach on Sept. 11. Photo credit: Courtesy of Dylan Rives

The church theme quickly disappeared, later replaced with bright multi-colored lights and dancing that was anything but holy.

“Feelin’ like a stripper when I’m lookin’ in the mirror / I’ll be slappin’ on that ass, gettin’ thicker and thicker,” Lizzo sang from her song “‘Scuse Me.”

After getting the crowd even more hyped up, the music got quiet, Lizzo took a seat, and things got serious.

“Can I have a real a** conversation with y’all for a second?” she said. “Everybody at this point knows what the f*ck I’m about. Body positivity. Loving yourself. Self care. But with all this I’m doing, I still keep running into f*ck boys. Whether it’s a f*ck boy, f*ck girl, f*ck them, f*ck they, I know you feel me Miami…I’m sick and tired of walking my fine a** out the door.” 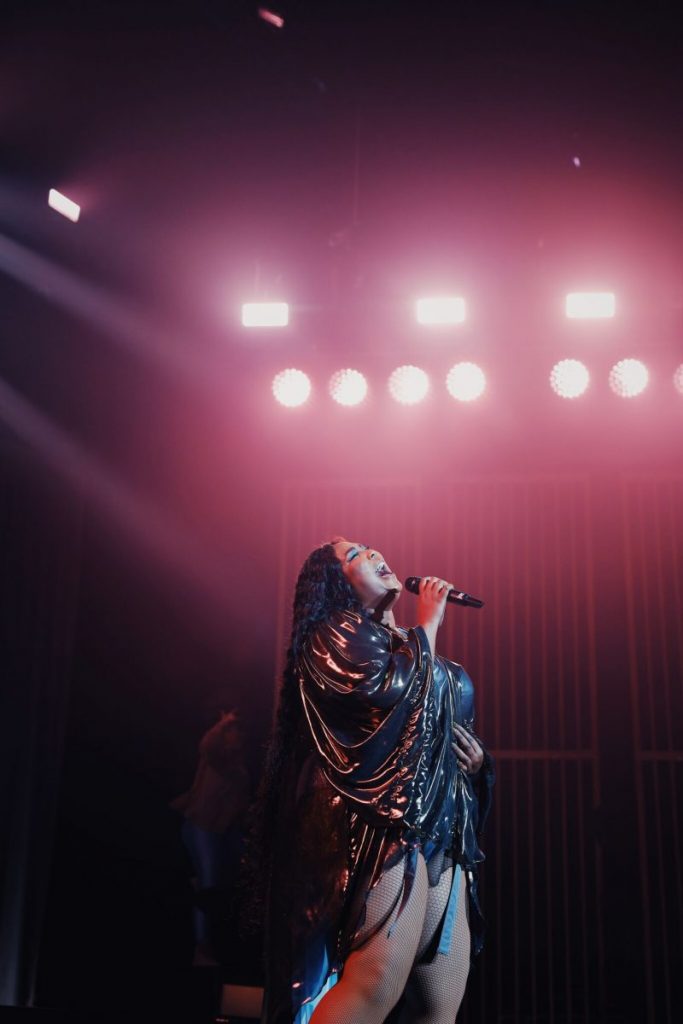 Lizzo gives her all during her performance at the Fillmore Miami Beach. The singer, rapper and actor shot to stardom earlier this year with her hit "Juice" and continues to deliver raw, emotional music to her dedicated fans. Photo credit: Courtesy of Dylan Rives

Her set included an array from her entire discography, including “Jerome” (which followed the monologue above), “Crybaby,” “Tempo” and “Boys.” She interacted with the audience in a way that seemed incredibly genuine, taking the time to autograph signs for her fans and talk to them in a conversational, friend-to-friend tone. Her laid-back attitude made it believable when she said, “I don’t feel like I have fans. I just feel like I have extended friends.”

Between songs, Lizzo repeatedly snuck in titbits of encouragement which promoted self love. She recalled being asked what a “Lizzo fan” looks like, to which she responded saying she did not know. This night, she retracted that statement, saying “I do know what a Lizzo fan looks like. It looks like a bad motherf*cker who loves themselves.“

As the show winded down, Lizzo got more candid. She talked about the power of vulnerability and how this has been “the craziest year of her life,” which it has. This year alone, the singer embarked on her first headlining tour, performed at multiple awards shows, had a song reach number one on Billboard’s Hot 100 and appeared on “Ellen.”

The show ended on a high note, with Lizzo performing her three most popular songs— “Good as Hell,””Truth Hurts” and “Juice.”

Though a generally upbeat show, the concert stirred an emotion in me that I had not expected. Immersed in the amazing talent in front of me, I was on the verge of tears after realizing how monumental and inspirational that moment was— to have someone so successful and confident for curvy girls to look up to.

I was not a super fan before, but I certainly became one that night, saving songs one by one to my Spotify as they appeared in the setlist.