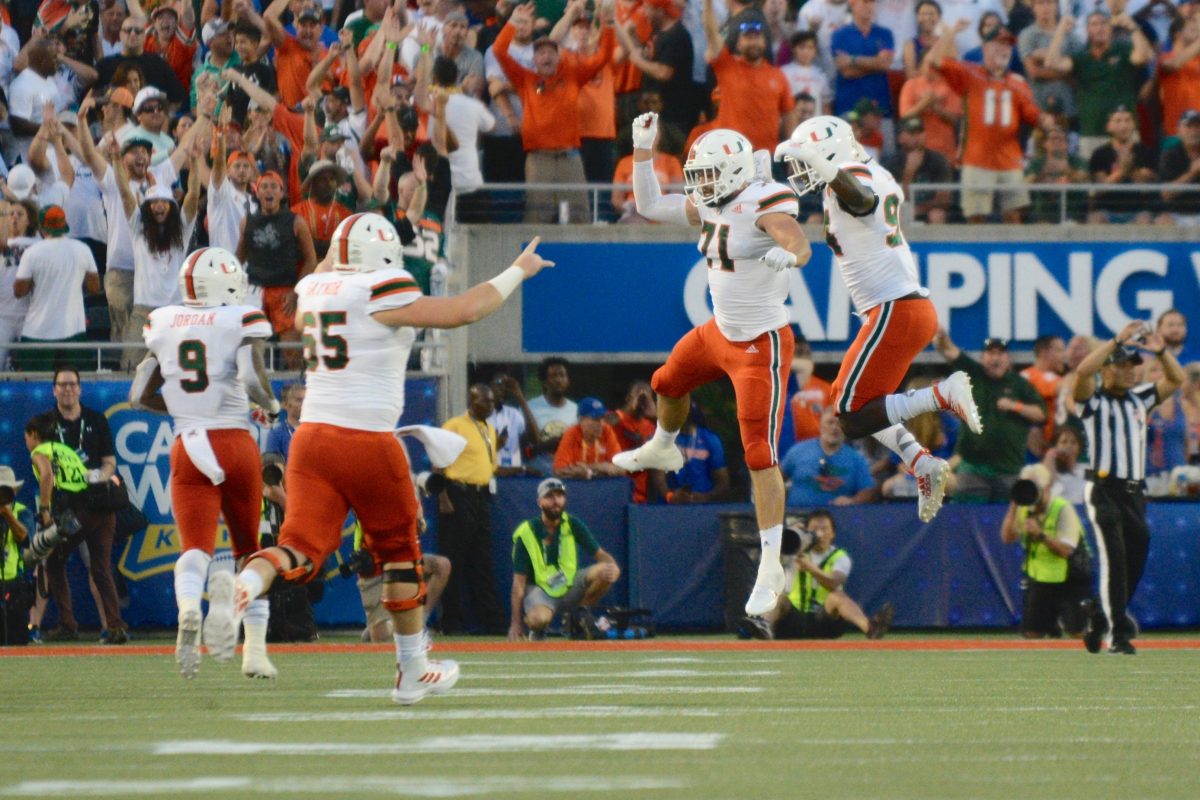 The Miami Hurricanes will return home to Hard Rock Stadium this Saturday and look to get their first win of the season against the Bethune-Cookman Wildcats.

After a disappointing 28-25 loss to North Carolina last week, head coach Manny Diaz emphasized the importance of playing in their home stadium.

“I think that’s just what this team needs,” Diaz said. “We need to get back into familiar surroundings, get in our stadium and get around out fans and get ourselves going.

The Canes are 11-0 all-time in home openers at Hard Rock Stadium and have not lost a home opener since 2006, when they lost to Florida State. This game also marks the first of five games Miami will play at home.

“I hope we get a big turn out with fans to be excited that we come home,” defensive end Scott Patchan said. “We want to make this a special five weeks.”

The Canes are looking to improve upon a number of things, including the offensive line, who performed better in week 2, but still gave up four sacks. The coaching staff made some changes to the line last week, benching John Campbell, moving DJ Scaife to tackle and putting freshman Jakai Clark at guard. The offensive line has a chance to prove themselves and dominate a weak Bethune-Cookman defensive line.

Running backs DeeJay Dallas and Cam’Ron Harris will also look to the offensive line to help pave the way. The duo is currently averaging 133 rushing yards per game. Dallas had 14 carries for 107 yards and Harris rushed for one touchdown against North Carolina.

Despite the strong performance by the running backs and quarterback Jarren Williams last week, Miami struggled to put together scoring drives.

“We drive the whole field and then kick a field goal,” Williams said. “We decided that’s not going to happen anymore. We have been working extra hard on our red zone schemes and just really making sure that we finish the drive.”

Bethune Cookman (1-0) has only played one game this season so far after their week two matchup was cancelled because of Hurricane Dorian. Fifth year head coach Terry Sims will lead the Wildcats, who went 7-5 in the 2018 season.

Miami’s defense should have no problem stopping Wildcats quarterback Akevious Williams. Williams threw for one touchdown and ran for another, averaging five yards per attempt in their 36-15 win over Jackson State.

The Hurricanes are 4-0 against the Wildcats since 2011 and have dominated the matchup 169-37. The Canes are 41 points favorites.

“It will be nice to get back home,” Diaz said. “Where we’re not the ones facing adversity all the time and to put out a performance that gets everybody excited about Hurricanes Football.”

The Miami Hurricanes will take on the Bethune-Cookman Wildcats at 4 p.m. September 14 at Hard Rock Stadium in Miami Gardens, FL. The game will be televised on the ACC Network.