It’s game day, and for the first time this season, students are getting ready to cheer on their team in the 305.

Despite a rough start to the season with back-to-back losses against the University of Florida and University of North Carolina, many students are optimistic about the Hurricanes pulling through with a win.

Alexa Skolnik, a senior double majoring in psychology and gender and sexuality studies, said she is very excited for football season to be back in full swing.

“Even with the losses, the first home game is always an exciting time,” said Skolnik, who considers herself to be an avid football fan. “I think some people like football for tailgating, but I like watching the games and the atmosphere at Hard Rock.”

Sophomore Amanda Costello is also looking forward to the home first game day of the year. The public relations major from Franklin Lakes, New Jersey explained that while she is always ready to cheer on the Canes, she has also been frustrated with how the beginning of the season has turned out.

“After the last game against UNC, I felt terrible and cried in the shower,” said Costello. “I really hope we win.”

Nikolas Gounaris, a junior from Long Island, New York also said he is disappointed in the start of the Manny Diaz era and believes the student body feels let down.

“A lot of students are disappointed after the first two games of the season,” said Gounaris. “There was a lot of hype going into this season with Manny Diaz returning to be the head coach and the acquisition of Tate Martell in the offseason.”

Gounaris said he thinks that students and the Canes community will attend Saturday’s tailgating festivities and the game, but that most of the attendees will leave half way through if the Hurricanes don’t meet the fans’ expectations.

“After watching two disappointing losses it makes sense for fans to not be as excited as we were a couple years ago,” Gounaris said. “Even when we were undefeated two years ago, students would leave at half time to get ahead of the bus line.”

Although some students have mixed feelings about what the future of the season will hold, first-year student Isabel Bauer Nathan said she can’t wait to experience her first game day as a college student, and most importantly, as a Miami Hurricane.

“I’m equally as interested to tailgate and watch the game,” said Bauer Nathan, “I can’t wait for our first home game and I’m so excited.” 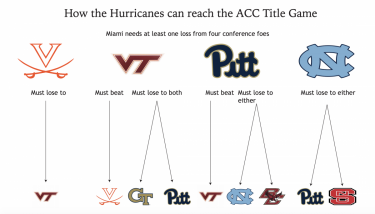