Mother nature didn’t fully cooperate with Thursday’s women’s soccer game between the Miami Hurricanes and the visiting Stetson Hatters. But despite a lengthy interruption in the first half, the Canes took home a 4-0 win behind a flurry of second half goals.

“Anytime you win a game, it’s a confidence booster,” head coach Sarah Barnes said after the win. “It was a sloppy game. We’re going to be able to make critical evaluations to help the team improve, but we can do it with the reassurance that we secured the win.”

In the 23rd minute, the game entered a 90 minute delay as a lightning storm passed over Cobb Stadium. Before the stoppage, Miami (3-1-1) had taken all three of the game’s total shots and both of the shots on target, but were forced to go back to the locker room and drawing board while cooped up inside.

“We basically used it as a halftime, just to make sure we understood the game plan, and when we come back out, we’re ready to go,” Barnes said. “[Our players] do a good job staying entertained and keeping the energy up.”

“[Barnes] said we had to focus on our decisions,”said junior midfielder Tia Dupont said. “We were moving the ball really well in the back and in the midfield to get into the front, but once we got it to the front, we weren’t finding the best options.” 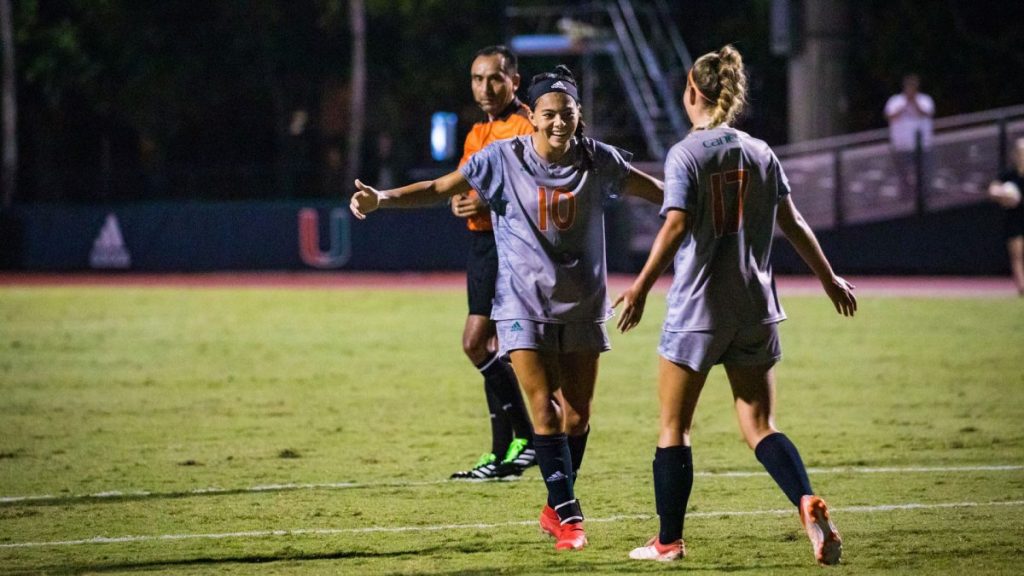 Beyond tactics, the team still had to find a way to pass an hour and a half.

“We had moments where we don’t talk everything soccer. You can’t talk soccer for an hour and a half straight,” Dupont said.

Once play resumed, the Hurricanes weren’t slowed down by the weather and got on the scoreboard with less than one minute to play before halftime via a goal from Kristina Fisher, right as the last of the drizzle was beginning to move away from the field. Dupont earned the assist.

Fisher’s goal was her second in her career in games against the Hatters, having found the back of the net in a game against Stetson as a freshman in 2016.

A 58th minute goal from María Jakobsdóttir off a deflection in the 18-yard box gave UM some breathing room after a quiet start to the second half, leading by two at this point.

Fisher earned her third point of the match by assisting Jakobsdóttir’s goal. Bayleigh Chaviers was also credited with an assist.

Goals in the 67th and 69th minutes by Ariana Munoz and Sierra Frey gave Miami an insurmountable lead. Frey’s goal also came on her 20th birthday.

Barnes was able to substitute some players out of the game as the Canes pulled away. Five starters were able to get off their feet as the clock evaporated late, including Dupont and Chaviers.

“I thought it was good in a number of ways,” Barnes said. “You can get some kids in who need the experience.”

In part due to the hiatus in action, it took some time for the Hurricanes to get in full rhythm, with a 34th minute strike from Dupont being the first major chance for either side to score in the first half.

But once in sync, Miami dominated, outshooting the Hatters 22-8, and recording 13 strikes on goal compared to just three allowed. Stetson didn’t get a shot until the 36th minute and couldn’t muster an attempt on target until the 38th .

The Hurricanes win comes a year after drawing 1-1 to the Hatters in DeLand, a game that ended after two overtime periods. Going into this year’s game, UM had last recorded a win over Stetson in 2016 and now lead the overall series 11-1-1. A 2017 meeting between the sides was cancelled due to Hurricane Irma.

Miami will get one more non-conference test when they travel to Gainesville to take on the Florida Gators on Sunday at 6 p.m. The Atlantic Coast Conference season kicks off on September 21 when UM travels to Blacksburg to play Virginia Tech. Home conference play commences against Pitt on September 29. 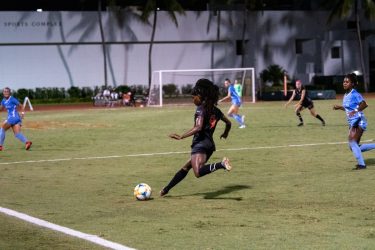