At his second annual State of the U town hall, President Julio Frenk presented what his administration is doing to ensure that the university’s upcoming centennial is not just a success, but also a blueprint for the future of UM.

Frenk said “the Roadmap to our New Century has a single guiding purpose— to make the University of Miami a beacon of understanding, prosperity and well-being that illuminates and inspires this community and the world.” 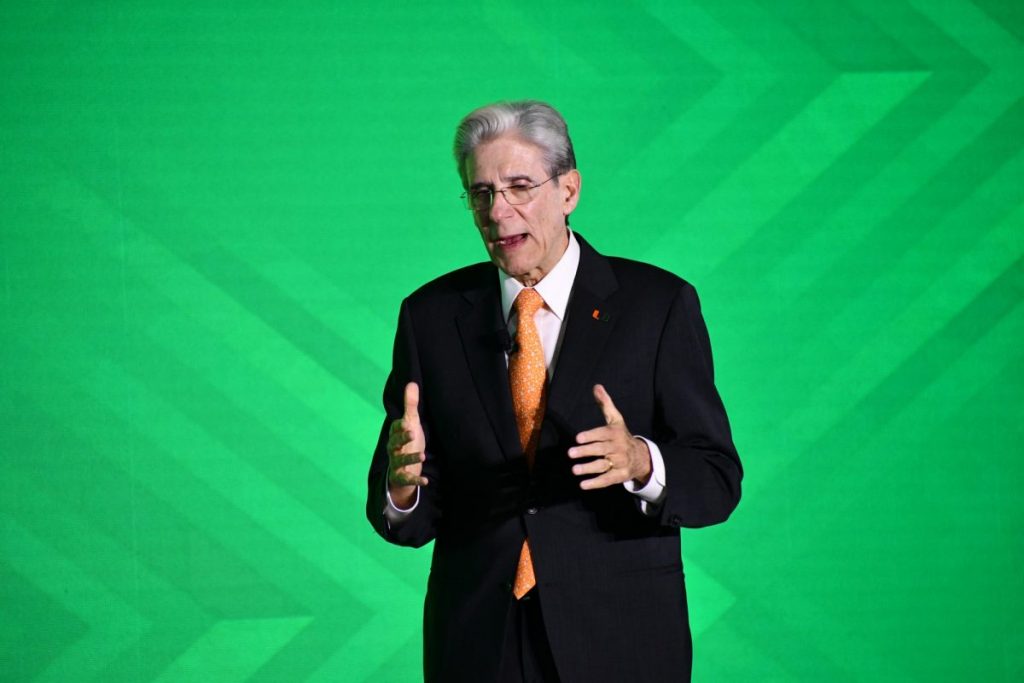 Frenk announced The Roadmap to our New Century at last year’s State of the U town hall in preparation for UM’s centennial anniversary in 2025. It details initiatives that lay the groundwork for success in UM’s second century, improving the student experience and making UM more competitive in areas of STEM research. Frenk repeatedly referred back to this plan and the university’s future throughout the event.

Distinguished speakers from the UM community joined Frenk in describing the university’s current state of affairs. The faculty guests included Stephen Nimer, the Director of the Sylvester Comprehensive Cancer Center and a professor at the Miller School of Medicine, and Andrew Baker, an associate professor at the Rosenstiel School of Marine and Atmospheric Science. Sade Prithwie, a senior in the School of Education and Human Development, also spoke at the event about her time at UM.

The next centennial to be marked by a focus on STEM

Nimer discussed the work he and his team accomplished while working to transform the Sylvester Comprehensive Cancer Center into a National Cancer Institute-designated center.

“Our teams of careful and collaborative cancer doctors and scientists worked tirelessly to prepare a 1300 page application for the NCI,” he said.

This achievement, Nimer said, “provides us with more than 15 million dollars in federal and state funding.” Sylvester is currently the only NCI-designated hospital in Southern Florida and one of just two in the state.

Jeffrey Duerk, executive vice president for academic affairs at UM, emphasized the university’s strategy to attainably reach its goals in the coming century.

“Over the last year or so, the university has identified its values and now we’re trying to take those transformative initiatives like STEM at UM, and breaking them down into bite-size pieces at specific projects we can work on and give rise to specific improvement,” Duerk said. 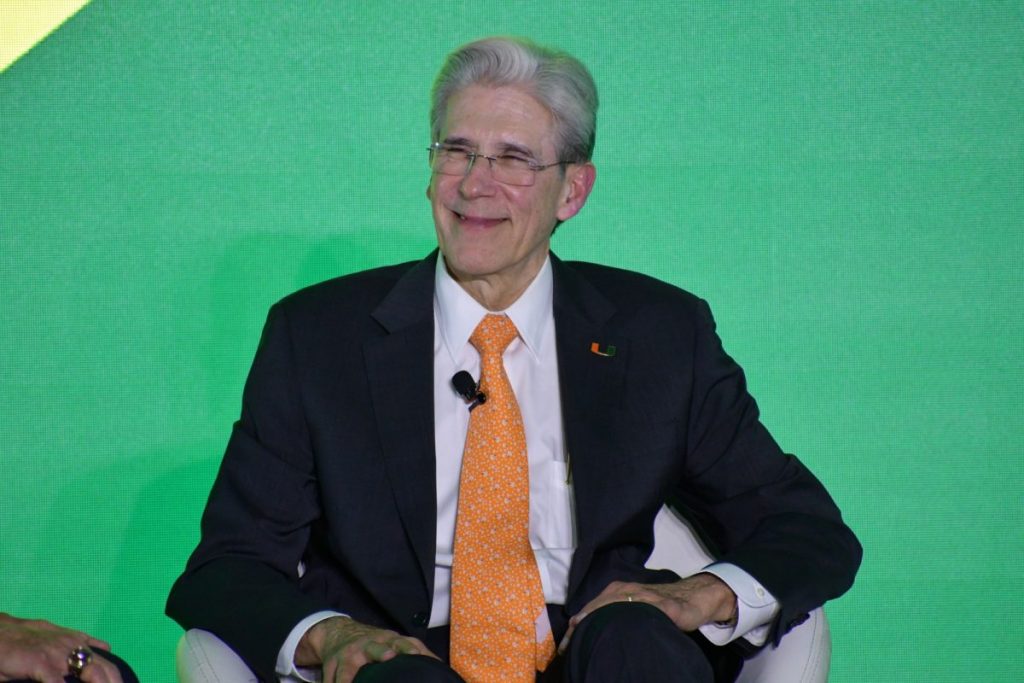 Frenk discussed the importance of investing in STEM and outlined his plans to improve UM’s programs. Photo credit: Jared Lennon

In line with the university’s energized focus in STEM, several new initiatives were discussed at the townhall, including U Link, UM’s Laboratory for Integrative Knowledge, which is an interdisciplinary initiative aimed at solving complex problems. Ongoing U Link proposals include engineering coastal resilience through coral reef restoration and exploring the relationship between oceans and human health sciences.

These opportunities for meaningful interdisciplinary work excited many, including David Steinberg, a faculty senator representing the School of Communication.

“It sounds cliché, but it is literally changing the world,” Steinberg said.

The town hall promoted overall awareness of all the many new plans in place at UM. Senior Jennifer Hudak, a media management major, found out about UM’s new Magic Leap Lab and interactive “U Experience” at the town hall and said that she is “definitely inclined to go check it out knowing that that’s a resource that’s available.”

“As a student, I really liked the point that he made about the fact that lectures aren’t bad, there are only bad lectures,” Hudak said. This goes in part with the university’s new teaching academy for faculty recruits, which launched this past summer.

“We know very much about the faculty scholarship as we recruit them,” Duerk said. “What we want to do now is make sure they’re also great teachers.” 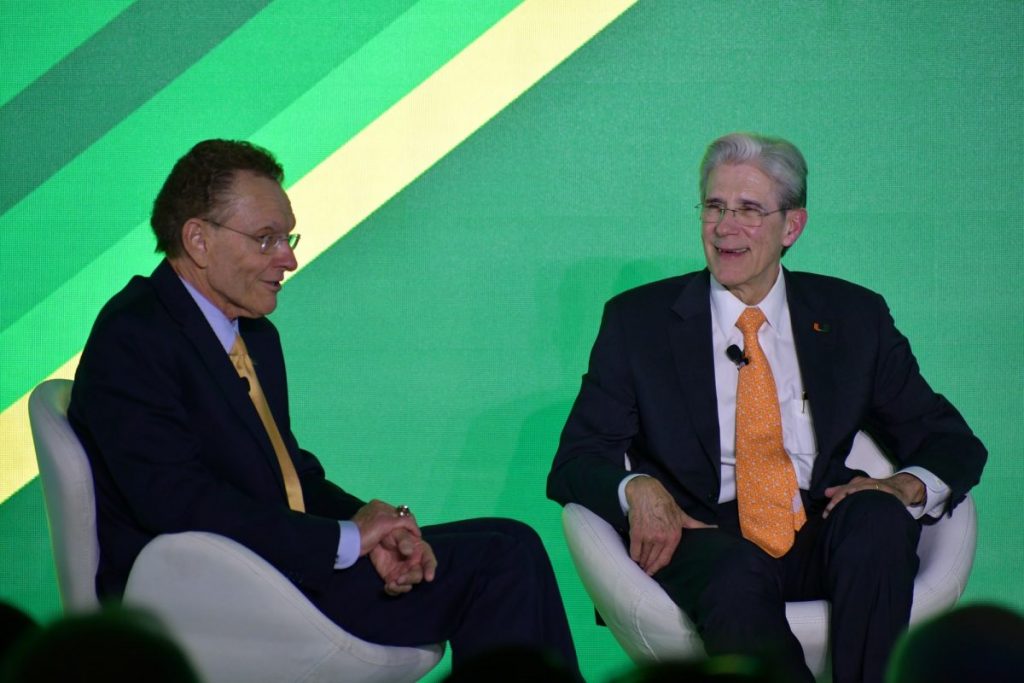 The educational improvements are geared toward the full range of students at UM, including professionals seeking continued education or those getting a later start on a college degree, in part of what Frenk called “education for life.” This idea encourages students to consistently return to UM classrooms throughout their careers, learning new skills and expanding their areas of expertise. Faculty Senator Steinberg said that he believes this will benefit not just the community, but the university as well.

Adult students completing their degrees at a later point in life “have life experience,” Steinberg said. “They have motivation, they have appreciation for meaningful lessons and experiences.”

Faculty and students respond to the State of the U

Overall, many students enjoyed the chance to hear from Frenk himself discuss the condition of the university, its ongoing plans and anticipated changes.

“I am highly appreciative and grateful for the State of the U address,” said Landon Coles, who is a sophomore majoring in legal studies. “It serves as a token of the administration’s commitment to transparency to faculty, staff and the student body.”

Hudak agreed that the event was a “great opportunity” to hear about what Frenk and his staff are doing to “improve our university experience as a whole.”

Student Government President Emily Gossett said the event was a “great showcase of the different strengths we possess as a university at the moment.”

“As someone who aims to advocate for students, I am always looking to be on par with what’s happening to make sure student voices are heard,” Gossett said. “This provided a great opportunity for me to see what was going on and make sure students’ interests were at the heart.”

The event also energized faculty members around the next century at UM. Mitsunori Ogihara, a faculty senator representing the graduate school, said that he was impressed with President Frenk’s initiatives.

“President Frenk communicated to us that many great things are happening at the university,” Ogihara said. “I am excited to be with this institution in this exciting period.”

Mackenzie Trexler and Daniela Perez contributed to this reporting.