In a game marked by the occasional wail of vuvuzelas, the women’s soccer team tied 1-1 with the visiting San Diego State Aztecs Saturday night in a match that extended through extra time. Despite the underwhelming score line, Miami maintained useful control over much of the game.

Through the first 40 minutes, the Canes were able to keep SDSU’s prodding overhead balls at bay and continued to get convincing chances at net. With two shots hitting the crossbar in a 10 minute period, Miami had offensive momentum into the end of the first half. Yet in a moment, that momentum was dashed away in frustration when SDSU was awarded a penalty in the 43rd minute. In an attempt to collect a loose ball after a corner kick, freshman goalkeeper Melissa Dagenais took out an opposing forward in the box to generate SDSU’s lone goal in the form of a penalty kick.

Despite the frustrating circumstances, Miami dug into a gritty, competitive mindset that generated plenty of chances moving through the second half. Multiple longshots, including a rocket over the bar by Kristina Fisher in the 52’, were peppered onto goal as Miami settled into the second half. With the Hurricanes aggressive wing play, they were able to fire off 19 shots, 8 of which were on target throughout the match.

The right side, featuring skilled seniors Kristina Fisher and Bayleigh Chaviers, especially provided problems for the SDSU backline. A chemistry built over four years was evident on the pitch and was echoed by the players.

“Bayleigh and I work so well together,” Fisher said. “I think just being here together for four years and finally playing on the same side has been really fun and I can’t wait to finish out the season with her.” 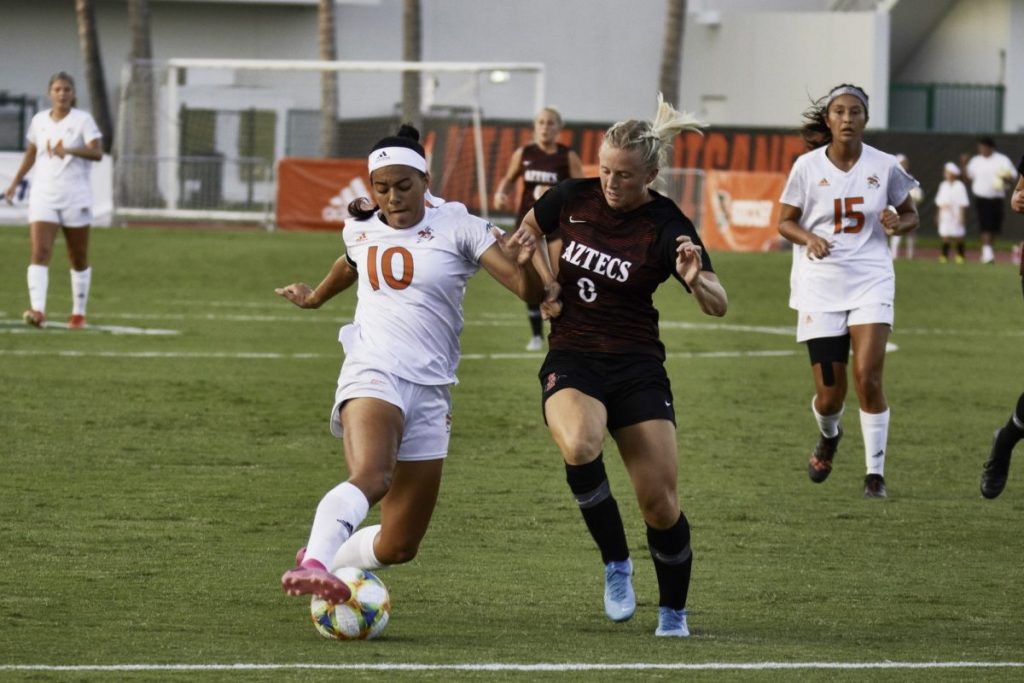 It was that exact side that ended up finally putting a chance away for the Hurricanes in the waning minutes of the second half (83’), as Bayleigh Chaviers chipped the ball over a keeper off her line, marking her first goal this season.

“In the spring we worked on it a lot, just cutting in and getting a shot off, and it just went in today,” Chaviers said.

“I was back post for her but I knew it was going in all along,” Fisher joked with her goal scoring teammate.

Progressing through the extra time and multiple cramped players later, Miami still couldn’t find the sought after back of the net. Every convincing opportunity was either snuffed out by SDSU, ended in a near miss, or fizzled out from exhaustion. The four shots and three corners in extra time still didn’t leave Miami with its golden goal. Instead they were left with a result indicative of two equal teams, something that wasn’t reflected on the pitch. Despite the unwanted scoreline, the players still said they feel good moving into the rest of the season.

“Take it day by day and practice by practice,” Chaviers said. “I feel like we’ve been doing really well together.”

Miami’s next match is against Stetson on Thursday at 7 p.m. at Cobb Stadium.

Astrology and love: Your Venus sign and what it means
Ultra returning home to Bayfront Park