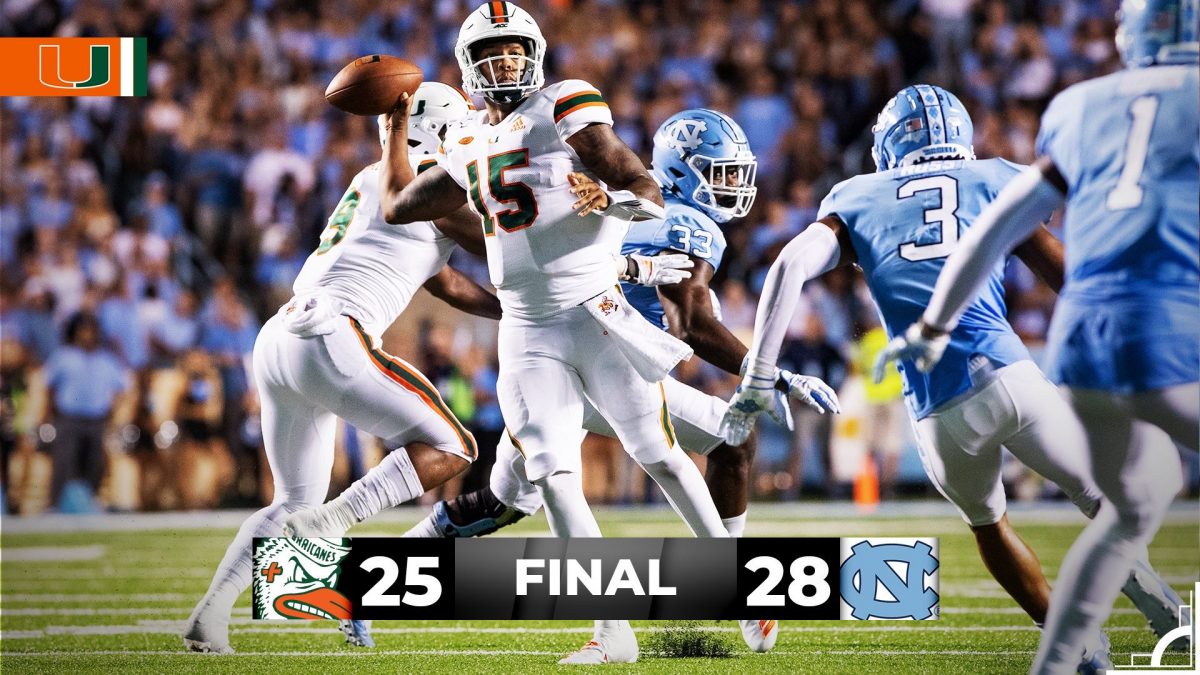 For the first time since 1978, the Miami Hurricanes are 0-2 to start the season following a loss 28-25 loss to the North Carolina Tar Heels Saturday night.

In what most would not have expected going into the season, the Canes defense was its biggest weakness in the loss. After taking a 25-20 lead in the fourth quarter on a 11-yard touchdown to tight end Will Mallory, the Canes were unable to stop North Carolina quarterback Sam Howell from completing a pass on a fourth-and-17 play on their own 40 that most likely would have changed the outcome of the game.

“We just didn’t finish,” linebacker Michael Pickney said after the game. “The sense of urgency wasn’t there and we just have to come back and do better.”

The Tar Heels would go on to score the go-ahead touchdown when Howell hit receiver Dazz Newsome in the back of the endzone on a 10 yard pass. Running back Michael Carter put the Tar Heels up three when he ran in to complete a two point conversion with one minute left in the game.

Miami got the ball back and drove 43 yards down the field on an 18 yard run from quarterback Jarren Williams and two completions to receivers Jeff Thomas and Mike Harley, but failed to move the ball past North Carolina’s 32 yard line, and kicker Bubba Baxa missed the 49 yard field goal to seal the game for UNC. Baxa had made one 50 yard field goal earlier in the game, but missed a 26 yarder in the second quarter and had an extra point blocked.

“We lost our edge in the fourth quarter and allowed them to score there,” head coach Manny Diaz said. “We gotta learn how to win a football game. There’s too many things that we are doing that are getting us beat.”

Despite the defensive struggles, Miami’s offense played surprisingly well. Quarterback Jarren Williams threw for an impressive 309 yards, completing a career best 30 of 39 completions with two touchdowns. Running backs DeeJay Dallas led with 107 rushing yards and and Cam’ron Harris had one touchdown and 60 rushing yards for the night. Thomas and KJ Osborn had seven receptions apiece.

“You could see the growth of our offensive line from week one to week two,” Diaz said. “We scored enough points to win a football game tonight, there is no doubt about that.”

Williams led four dominating drives down the field into the redzone, but three ended in field goals, with one missed, and one resulted in a turnover of downs.

“I feel like we responded well and we are definitely getting better,” Jarren Williams said. “We still have some things that we need to work on. No matter what the situation is, we have to execute.”

“When we get it all sorted out, we have a chance to be a good football team,” Diaz said. “But right now we don’t have it figured out yet.”