Home » Hurricanes looking to get back on track in home opener

Hurricanes looking to get back on track in home opener 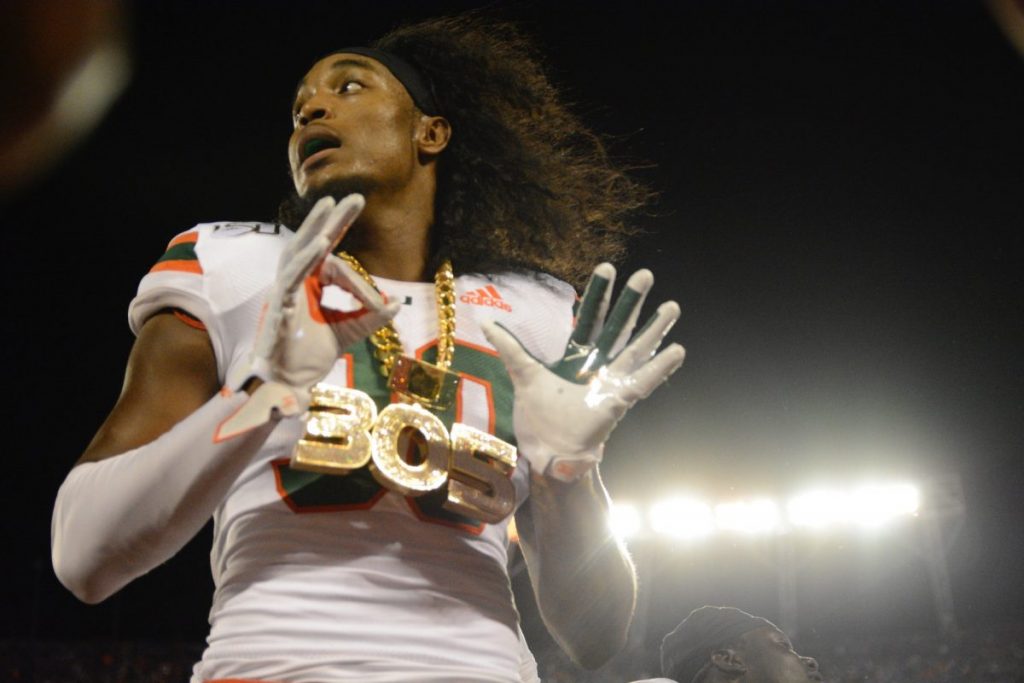 Many things became apparent when the Miami Hurricanes fell to North Carolina 28-25 Saturday night, but perhaps the most obvious was the vulnerability of the Canes defense.

A key play where the defense faltered was in the fourth quarter on 4th-and-17 where Miami had an opportunity to close out the game, but instead allowed the Tar Heels to throw a 20-yard pass leading to a touchdown.

“It’s simple,” said linebacker Michael Pinckney. “We just got to finish. We had them backed up in a critical situation and they made a hell of a play.”

Linebacker Shaquille Quarterman acknowledged the fourth down collapse was a lack of execution by the entire defense and not just one player.

“It’s always more than one guy, it comes down to competitive excellence, a big-time down 4th-and-17,” Quarterman said. “We just gotta be better and keep working.”

Despite the evident defensive miscues, the most promising performance of the night came from quarterback Jarren Williams, who completed a career-high 30 passes for 309 yards and two touchdowns. Williams took a step in the right direction, showing tremendous improvement from the previous week’s game. Williams was also sacked four times, a testament to the improvement of the offensive line that gave up 10 sacks against Florida. At the end of the day the Hurricanes offense did not do enough to win the game, but Williams definitely took a step in the right direction.

“It’s a tough one to take for sure, but we are all staying together, we are a team and we know we just gotta work harder, go back and watch the film and clean up all the sloppy mistakes we made,” Williams said.

If this team can learn how to finish, then they have a great opportunity to win some football games. It is not like the Hurricanes have been getting blown out of the water. The team has lost both of their games so far by a combined touchdown and has had an opportunity to win the game during both of the final possessions.

“If you look at the way that our schedule breaks down, we have probably gone into the two most difficult environments we will play in all year,” Diaz said.

Leaving points on the field continues to be an issue for the Hurricanes, with two missed field goals against North Carolina, but head coach Manny Diaz is not losing hope in kicker Bubba Baxa just yet.

“Bubba is our kicker, we have great faith in him, we know that he is as talented as anybody out there,” Diaz said. “Bubba can’t let one miss turn into two misses.”

The season is still early, and even though the Canes’ chances at the college football playoff look extremely unlikely, this team is young and has a chance to improve each week in order to play in a bowl game. What this team needs is a big performance on Saturday to build confidence in front of their own fans.

“We are very, very excited to come home,” Diaz said. “I think that’s just what this team needs. We need to get back to familiar surroundings, get in our stadium, get around our fans, and get ourselves going.”

The Hurricanes will face Bethune Cookman in their home opener this Saturday, Sept. 14. The Canes last played the Wildcats in their 2017 season opener, where they went into the season ranked No. 18 in the country. Former Canes running back Mark Walton put on a show in their 41-13 win.

Bethune Cookman is 1-0 this season. Their Week 2 game against Southeastern Louisiana was cancelled because of Hurricane Dorian.